Sean Baker's (The Florida Project) Red Rocket flies as far as it can go on a pretty good premise: a washed-up porn star (Simon Rex) moves out of Cali and in with estranged wife Lexi (Bree Elrod) and Lexi's Mom (a perfect Brenda Deiss, a former secretary Baker met by happenstance when she had car trouble) in rural Texas, starts selling pot for a living, and lewdly crushes on freckled local donut shop girl Strawberry (Suzanna Son). As in The Florida Project, the film takes on a focused point of view in specific marginalized America. In Florida, Baker portrayed lives of motel dwellers on the outskirts of Disney World; here, we see a mélange of characters living on very little on the Gulf outskirts of Big Oil.

An exquisite ensemble fuels the movie with tough, but humorous flair. These are characters who don't want to be pitied, and Baker portrays them for who they are in all their flaws and questionable decisions (like masquerading as a vet while hawking flags in the mall--an excellent Ethan Darbone). Judy Hill as Baker's no-nonsense boss is another effective and funny presence. Even if the film runs out of steam in spots--its bike-riding-in-circles-monotonous-aimlessness part of the point, but also a detriment to the movie's momentum--Rex shines in his centerpiece role and carries the film with relish. It's hard to imagine anyone playing it with such gusto and realism. It's also a meta turn in a way. The soundtrack includes brilliant uses of *NSYNC's "Bye Bye Bye," a plastic pop classic both from the decades ago era of Mikey's award-winning adult film star streak glory years and Rex's own career heyday on teen-appeal TV. Red Rocket is squarely set on the eve of the incoming disaster of the 2016 election, personally, a traumatic time to return to. Caught between the turbulent times with Lexi and his burgeoning adventures with Strawberry, Mikey's predicament is cut into different directions--a pang for past heights, a desperate remodeling of the future, and an unraveling, futile present. 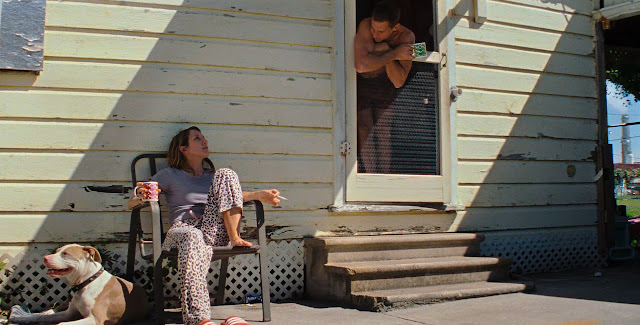 Baker's films have a very distinctive, appealing visual style while also being dotted with un-famous actors, including many non-professionals. Both of these elements are at odds with one another: the sense of controlled artistry against the rawness of the cast--which make an exciting clash. The humor of the script (written by Baker and his co-writer Chris Bergoch) keeps a thin distance from the grimness of the material. Red Rocket's intoxicatingly sugary cinematography is by the talented Drew Daniels. The pink-lit dusk, the glinting of oil refineries, and the pastel donut shop and home of Strawberry, are evocatively presented without feeling distracting. Even if Red Rocket fizzles a bit in its overlong runtime, there's much to cherish here. ***

Posted by MrJeffery at 8:25 PM