let them all talk 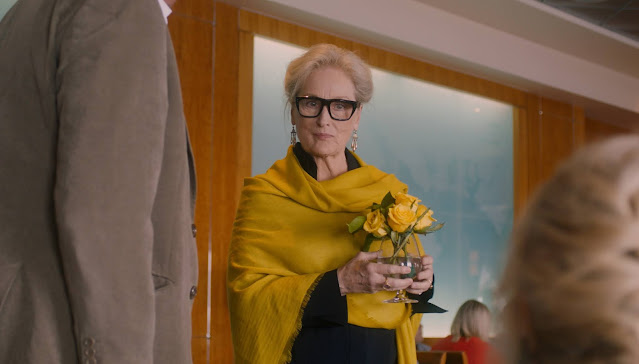 After the disappointing, ineffectual The Laundromat, I wasn't sure what to expect from another Soderbergh / Streep collaboration, but consider me pleasantly surprised by the layered, acerbic, and bittersweet Let Them All Talk. In the film, a novelist Alice (Meryl Streep) travels to England on a cruise to accept the prestigious / niche "Footling Prize" with her nephew Tyler (Lucas Hedges), two distant old college friends, Roberta (Candice Bergen) and Susan (Dianne Wiest) in tow. Meanwhile Alice's agent Karen (Gemma Chan) is secretly aboard to try to coax information from Tyler in hopes of Alice writing a follow-up to her Pulitzer-winning novel. If this "secret agent" side plot seems tenuous, it is--dipping into fairly fluffy caper comedy stuff but still enjoyable nevertheless with its skilled young actors at the helm. I viewed this film on HBO Max, a weird experience, as I can presently only access it on my phone, that probably doesn't do the movie much justice. Hopefully I can appreciate it in the theater someday. It is an extremely pleasing-looking picture: a buttery yellow-lensed (Soderbergh as Peter Andrews) Queen Mary 2 (as a non-cruisegoer, are cruises as lovely-looking and uncrowded-feeling as this one?) that's a luxurious watch even as it’s fraught with the unrequited on all fronts. 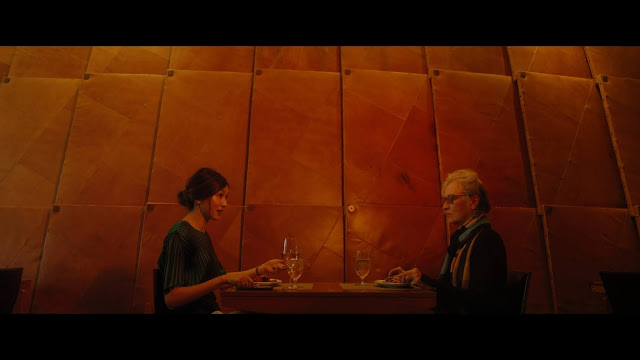 The film focuses upon language—evident in Alice’s portentously vague musings on “words.” What’s said and unsaid is scarred, awkward and tense, even with alcohol flowing. Between the relationships among these former friends who haven’t seen each other in over thirty years, Roberta doesn't even recognize "Al" anymore--not because of the way she looks, but the way she speaks. Deborah Eisenberg’s script, a brilliant debut screenplay, understands Alice’s universe well. Even if the moments of the plot can be on the flimsy side, perhaps purposefully flimsy (“plot-driven” novels of the famous thriller writer aboard the ship are pitched in a vein of light jabbing), the dialogue is sharply-realized and rhythmic. If there are notes of improvisation among the pro-players and their wry director, I wasn’t aware or distracted by it, instead, I felt the emotional calibrations of the interactions. I was taken aback to the sort of halting punchline rhythms of Lawrence Kasdan & Barbara Benedek’s The Big Chill. The dialogue is sparkly but not really overly distracting, inauthentically speedy nor talky—the silences are impactful as the barbed words. Soderbergh’s films, as absorbing and meandering as they can be, often tend to run their course and get baggy in their final acts, with unsatisfying endings. This movie, however, takes a nervy swerve that ends up changing the tone of a previous scene and also the characters’ previous actions in insightful, fascinating ways. 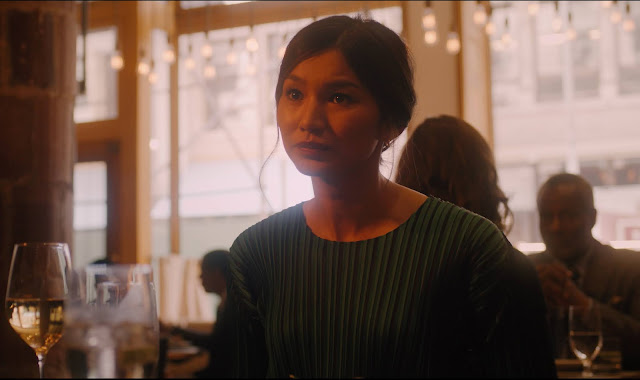 Besides the sharp screenplay, as usual, Steven Soderbergh's film delivers in the tech departments. Thomas Newman’s jazzy score is a very atypical Newman score (no twinkling pianos or chilly, sly American Beauty instrumentations or chord structures here). It may not be the best music to listen to on its own, but it’s essential to the film itself—a warm, frothy soundtrack that helps carry the mood and tone of the picture along. Between this, Unsane (which he composed under pseudonym) and Side Effects, Soderbergh and Newman have been a great team in recent years, with Soderbergh encouraging Newman's talents out of his usual output. 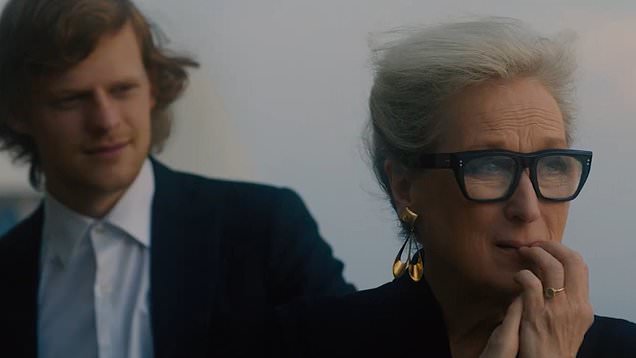 Another praiseworthy element on display are the costumes by Ellen Mirojnick. Contemporary work like this, including her dynamic effort on Soderbergh’s Logan Lucky, rarely get as many accolades as fantasy or period pieces, but Mirojnick's work shines again, offering comic touches while enriching characterization. There’s something bold and quietly desperate about Roberta’s animal print ensemble as she goes to the “gala” to meet a match or her penchant for fringy denim shirts. The costumes illuminate the separateness of the trio, often epitomizing each woman’s far-reaching geographical location (Seattle, NYC upper-class, and Dallas).

This is a fine ensemble to watch, especially the women in the film (Streep, Bergen, Wiest, and Chan). I was struck particularly by Candice Bergen. Roberta is out of a failed marriage. She blames it on Alice's famous novel which may have cribbed details from Roberta's life. Now Roberta is single and ready to mingle, hopefully with a Queen Mary 2 passenger with deep pockets. Through Bergen's complex turn, this isn't a pitiful character, it's a fascinating one. I, perhaps very unjustly, never thought of Bergen as a compelling thespian. This performance, however, is brassy, but also extremely sophisticated and understated. She has an uneasy, swaying gait and disposition. Her Texas twang comes and goes—perhaps by accident—or perhaps purposefully, when her character either wants to turn up the charm or the savagery. Bergen's comic timing, pained facial expressions, quick raised eyebrow, all kill from her beginning scene where she is dealing with an annoying, disgruntled character in the low-grade Victoria Secret knockoff store she works at. It is a high wire act to steal scenes from someone as ostentatious as Meryl. Viola Davis managed it in Doubt. Bergen does it for me here—the character of Roberta became real to me, despite the star power of the performer. Her presence, along with Wiest and Streep, all add to the poignancy of the movie: these actors in their later years, giving us some their best work. ***

Posted by MrJeffery at 3:41 PM