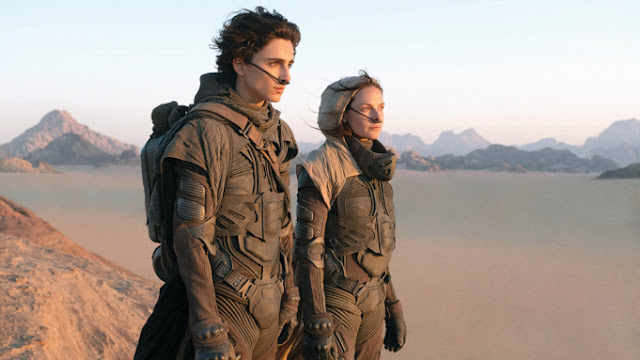 Denis Villeneuve's mammoth adaptation of just a sliver of Frank Herbert's multilayered, enduring Dune universe is full of tech wizardry, a bombastic, too on-the-nose Hans Zimmer score, and appealing actors. Akin to Lawrence of Arabia, it seamlessly zips between the miniature (sweat beads on a mouse-like creature's ears) and the vast (a rumbling, slithering sandworm), but overall, the movie feels as airless and dry as its monotonously beige and gray color palate and desert landscapes. It's difficult, however, to be critical of a current Hollywood film with such ambitious aims, not only in scale, but in cinematically re-working intelligent science fiction. It's also difficult to critique a film that feels incomplete, and is purposefully rendered as just a bite of a larger whole yet to be seen. 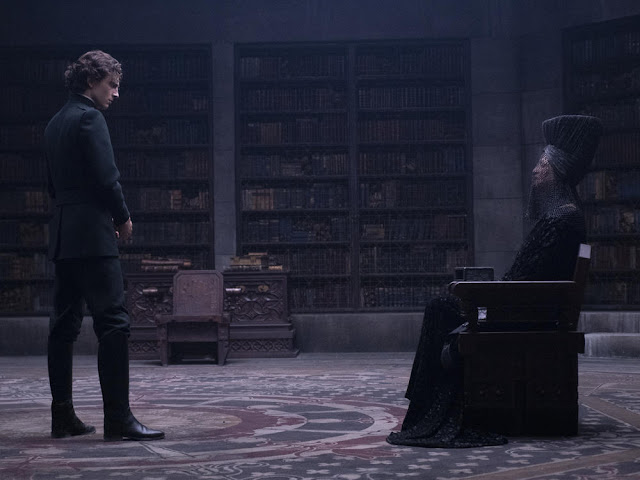 Written Eric Roth and Jon Spaihts, the script is shaped primarily by a somewhat rote hero's journey of Paul (Timothée Chalamet), son of a Duke (Oscar Isaac) from a militaristic society. Because the story seems so driven by interiority, by palace intrigue on the outskirts, we are left mostly with Paul to propel the baggy narrative forward. Intermittently, Paul has visions of crucial future incidents--especially those on the planet Arrakis. This planet, which is of more diverse racial make-up (the Fremen), is repeatedly ravaged for its vital spice resource (the allegory of this to contemporary times, and throughout the history of humankind, remains a resonant and salient aspect of this tale). I hungered for the perspectives of the intriguing Fremen tribe leader Stilgar (Javier Bardem and his throaty baritone) and the bewitching Chani (Zendaya), who Paul is transfixed by. It does help that the two main leads of the story are well-cast: Chalamet as the wiry, somewhat naïve, but curious, Paul and Rebecca Ferguson as his steely mother, Lady Jessica; both have compelling looks and demeanors. Yet, when there isn't a grand action sequence swirling, both actors have to resort to a lot of wooden posing and whispery line readings. While an important aspect of Paul's psyche, and also one of the reasons why he's able to advance through the story, his future visions add and pad the film's seemingly endless running time without further developing Paul as a character.

In fact, the characters presented in this chapter are rather lifeless, dare I say "flavorless." Charlotte Rampling, as Gaius Helen Mohiam, weirdly makes an exception (interestingly while her face is almost completely shrouded in black lace), in a short scene that pops between her and Chalamet: a tense "game" / exchange ("Gom jabbar") with young Paul (I thought of a similar, "do not fear" scene in Phantasm). Afterwards, Mohiam tells him, "Like sifting sand through a screen, we sift people. If you had been unable to control your impulses, like an animal, we could not let you live. You inherit too much power." This is one the rare moments of the film where I felt a glimmer of emotional breakthrough, a sense of tension. Perhaps this is purposeful since it's a game to test Paul's humanity--where "humanity" and true fear has a chance to shine intensely for one too brief moment. And this clocks in barely before the thirty minute mark. 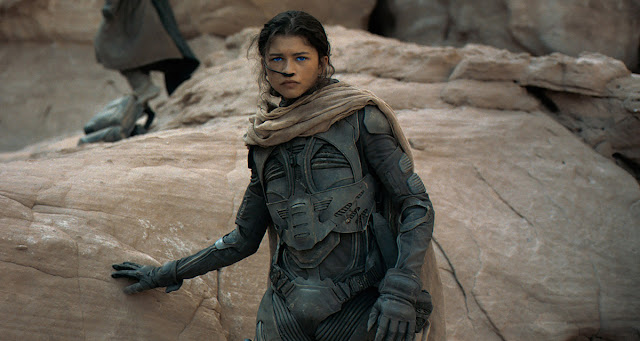 What's more interesting to me than Dune: Part One, the movie itself, is how Dune: Part One the movie fits in the current landscape of movies. Huge mainstream movies that may have gotten a peek at prestige festivals (Dune: Part One specifically to get some critics and audiences on board ahead of time) are now delivered simultaneously via the theater and studio streaming services. While this has been discussed by pundits and filmmakers (many with scorn), it continues, as the pandemic sadly wears on, to seem we are at a major turning point in motion picture culture. Also that Dune doesn't really feel like a film, but one gigantic miniseries (at the end, an angered patron near me leaped from his seat and said, "Are you fucking kidding me? That was like four chapters? I'm going to have to watch five or six of these damn movies!"). With spectacles, we've been groomed to expect a sequel or a batch of sequels, reboots and origin stories. As years go by, I feel like the appreciation of the "movie timeline" is evaporating--people and their money seem to be increasingly leaching on to long, drawn-out episodic series and franchises. As a movie lover and a lover of the medium of movies, and what it's able to fit in a determined runtime, I can't help but be somewhat discouraged by this direction. One wonders, will Dune: Part One be more impactful as a collection than this on its own as a first foray? So far, I was served so much muchness, and yet so little. **
-Jeffery Berg
Posted by MrJeffery at 4:03 PM