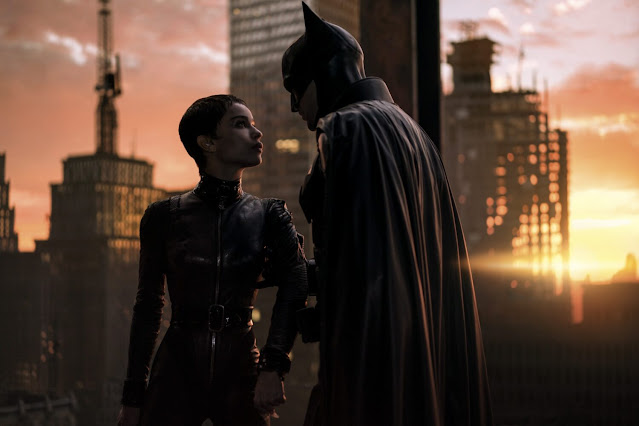 Even though it goes back earlier from the many different incarnations, the commercialization of the Batman universe is something I remember distinctly as a kid in the summer of 1989. That yellow and black iconography was ubiquitous and almost like a permanent tattoo upon America's moviegoing soul. After decades and decades of Batman movies, Matt Reeves' moody dirge arrives in a particularly fraught time in America and throughout the world. Even though we've been bombarded with superhero movies about good triumphing over evil and / or the ambiguities of good and the ambiguities of bad, it doesn't seem like it's made society any better--even as we've watched buff, caped crusaders save universes  and topple hammy villains on the grandest of scales. And perhaps that's why these movies remain part of the zeitgeist, even if it seems impossible there could be any steam or public interest left in the constant recycling. Before my screening of the Reeves picture, cutesy, overt attempts at tying Batman into the Sonic 2 trailer and an ad for Little Caesar's Pizza (a bat-shaped pepperoni calzone gleaming on-screen) conveys the film universe's wobbly delineations between packaged commerce and cinematic takedowns of capitalistic greed. 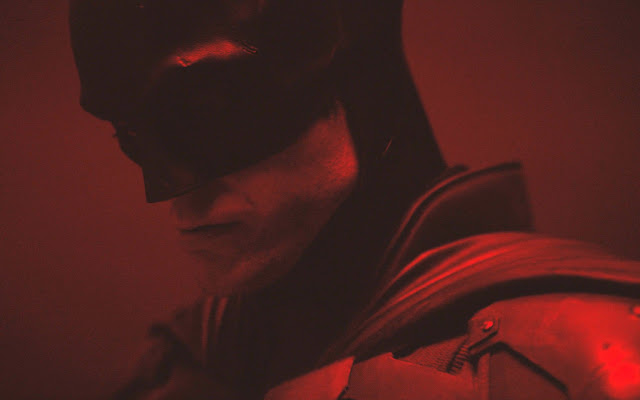 Alongside Greig Fraser's (Dune) excellent, ghostly photography, Reeves' The Batman harnesses the atmospheric rain-soaked gloomy metros of Ridley Scott's Blade Runner and Christopher Nolan's portentous Dark Knight trilogy and sprinkles in a few horror homages to Hitchcock and Carpenter for good measure. As one moviegoer noted after my screening to his companion, "It looks like that movie based on Stephen King about the killer car." Indeed, The Batman, a yarn of Bruce Wayne / Batman (a glum Robert Pattinson) entangled in a detective search for the murderous The Riddler (Paul Dano--no-holds-barred in mournful fury, donning creepy clear-framed glasses), often feels more like a horror movie than a superhero one. There's a bit of a Saw-like mischievousness as we witness the Riddler's trickster death traps.

As someone who struggled through the corny humor of the trite, tedious, seemingly never-ending Spider-Man: No Way Home, The Batman is a commercial film that's more in my lane of a sinister thriller. It doesn't flounder as a static villain character study like Todd Phillips' Joker, though it takes cues from its tone and style. The movie burns through some thrilling action sequences, aided by dynamic sound design and a grandiose Michael Giacchino score (its main horn theme sounding as if it's about to break into John Williams' "The Imperial March" from the Star Wars saga; another motif is a minor key invert of "Ave Maria"). A key song cut is Nirvana's "Something in the Way," a strikingly lonely tune, which drones on as a reminder of what these early 90s kids were borne out of in this parallel Gotham City world.

Like most films of its kind, the cast is a mixed bag. Pattinson is lifeless--emanating a gray, wooden emo blankness that somehow male actors are able to get away with without much criticism. I still prefer and enjoy Michael Keaton's layered mysteriousness and Tim Burton's finely-tuned balancing of pop comic colors with shades of gritty gloom in comparison to all the latter Batman cinematic versions. This is glaring as well with even beginning to compare Michelle Pfeiffer's vibrant, scintillating Catwoman with the talented Zoë Kravitz's dour portrayal. None of this is really the fault of the actors per se, but what seems to be the director's vision for these characters. The scenes (and there are a lot of them) between Pattinson and Kravitz in particular are all a bit of a snooze. Still, the sweeping techs and visuals, the tense horror kills, and some of the supporting characters, particularly the always-strong Jeffrey Wright, make The Batman an occasionally compelling and worthwhile film. It's also a deeply political one that speaks to our times: the rampant apathy and discouragement of being able to get much done progressively in the post-Obama years; the scrutiny upon political leaders as imperfect, and at worst, horribly corrupt; the proliferation of tech and its ability to connect radical agents of violence. Here, a torch is raised to guide souls through this flooded, broken world. It's one of the more simultaneously hopeful and cryptic images of the movie--a movie that ends up ending too many times. ***
-Jeffery Berg
Posted by MrJeffery at 12:05 PM