Smart, mainstream adult dramas are in short supply these days--that's one of the many reasons why Maria Schrader's (I'm Your Man) film adaptation of New York Times reporters Jodi Kantor and Megan Twohey's book She Said is refreshing. Let's just say it's not the typical type of movie to be proceeded by the Universal globe, but Hollywood should be making more movies like this. The film tracks Kantor (played by Zoe Kazan) and Twohey's (Carey Mulligan) sweeping, yet meticulous work in compiling and breaking one of the biggest stories of our recent times: the Harvey Weinstein sexual assault scandals. The movie shows their process with a sense of sincerity and urgency: Kantor and Twohey hustle from location to location (Weinstein's victims spanning the globe), getting calls--sometimes threats--in the middle of the night, all while raising kids. There are disappointments along the way--those who don't want to be named, interviewed, found. The movie shows the power of teamwork within the hierarchy of the Times. It's a flattering portrait, perhaps in part because the film makes use of the authors of their source material, location and name, with a calm and direct Patricia Clarkson (wonderful casting) as editor Rebecca Corbett at the helm. Meanwhile, in the background, the ominous tumult of 2017 America plays out--Trump's first year in office, the Las Vegas mass shooting, the Charlottesville Unite the Right Rally. Also shown is the Women's March in Washington, D.C., an outpouring of outrage, protest and comradery under the shadow of Trump's inauguration. Ashley Judd, who played a pivotal role in the March, ends up becoming a key person in and ally of Kantor and Twohey's story (the use of the real and the seemingly "real" is sometimes imbued with subtle humor and effective throughout).  This queasy year is presented vividly and accurately--it's before COVID and the overturning of Roe vs. Wade--and part of the film's power is knowing where we are now and where we were a mere five years ago. It's infrequent, perhaps risky, to see our recent past portrayed in a movie--unless it's a documentary (a plethora of which we are served on streaming services constantly). 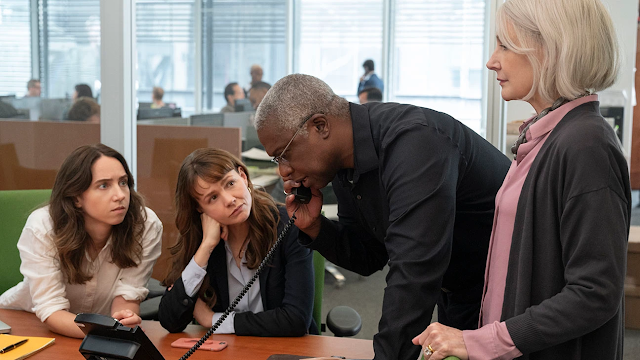 Interestingly, I couldn't detect much in common between Schrader's directing on this and I'm Your Man, except for a visual and narrative smoothness and strong work with actors. Samantha Morton in particular, as a former Miramax assistant Zelda Perkins, is haunting and commanding in a single scene. The way she builds her scene in the manner of a slow crescendo and chilling denouement is flat-out breathtaking. Nicholas Britell's music is, as usual, beautiful, but it's jarringly loud and overbearing in the film--sudden string flourishes dig into scenes that don't need them. The editing by Hansjörg Weißbrich is sometimes choppy and clunky, and some scenes with the usually good Jennifer Ehle feel unexpectedly leaden, but overall, there's a swiftness and economy to She Said. The support and teamwork between women is absorbing to see onscreen and the final moment--juxtaposing the nitpicky banality of their work with the intensity of the story itself and its ultimate influence--is powerful. ***

Posted by MrJeffery at 7:26 AM