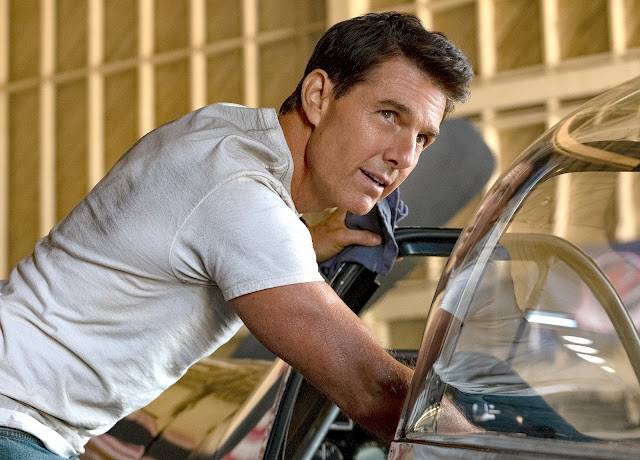 I remember being on the playground, and the boys I was with were naming each other: I'm Maverick. You be Goose. You be Ice Man. I didn't want to be any of these men. The original Top Gun was released around my sixth birthday in 1986 and I saw it with my father. I remember the Kenny Loggins track "Danger Zone" thundering, and back then, I mistook the lyrics as "I went to the candy store." The movie fits in my cinematic memories as hazy discomfort with my own gender. I knew I had to conform and play one of the male roles. How ever us boys ended up acting out flying separate fighter jets on the blacktop landscape of a South Carolina playground is unclear. The movie didn't speak to me then--its endless parade of machismo. I couldn't even begin to articulate my own queerness. Pauline Kael's review described Top Gun as a "shiny homoerotic commercial" with "pilots [strutting] around the locker room, towels hanging precariously from their waists." Years and years later, I would see this, of course, particularly in the slicked torso volleyball sequence backed with Kenny Loggins' steely rock rhumba "Playing With the Boys." In 1986, I couldn't process it, just as I didn't get the breezy sexual innuendo jokes of two other Paramount rental classics of my generation: Clue and Grease. 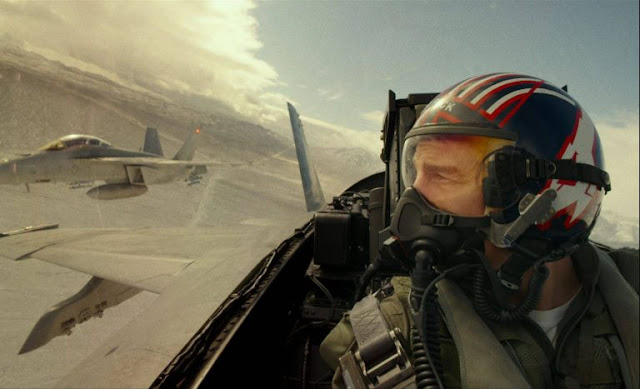 So I went to Top Gun: Maverick thirty-six years later with a queasy sense of unease. The trailer (played over and over again since 2019 due the film's logistic and COVID-related delays) suggested both the flagrant parading of unchecked patriotism and chiseled, gum-smacking crew cut masculinity that I don't connect with (and abhor). And yet, to my surprise, Joesph Kosinski's sequel is an electrifying experience. It is endlessly wistful about the past, as if pleading to the audience "You've Lost That Lovin' Feeling"--The Righteous Brothers golden oldie that became a radio sensation again in the mid-to-late 80s again due to its use in the original film--and you want that lovin' feeling back. 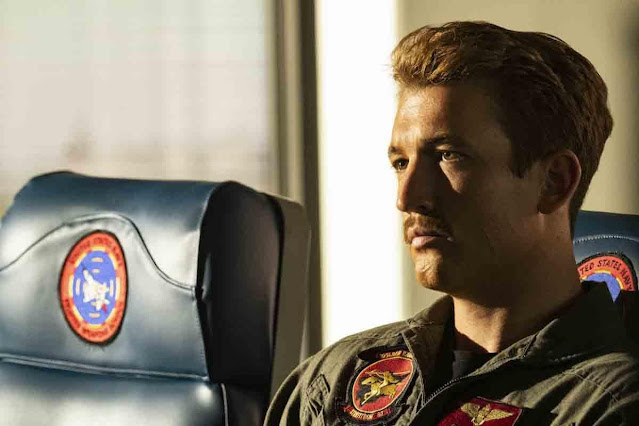 Recommended by his old flying frenemy "Ice Man" (Val Kilmer), Navy test pilot Tom Cruise's Pete "Maverick" Mitchell is assigned to train a group of pilots on a perilous mission; one of the flyers is Maverick's late friend Goose's son, "Rooster" Bradshaw (Miles Teller), who hauntingly looks like him and even knocks off Jerry Lee Lewis' "Great Balls of Fire" on the piano. Maverick's unconventional training and bravado is met with stuffy disdain by Jon Hamm's Admiral. It's all very conventional movie plot mechanics. Though Cruise and the supporting players' disarmingly charming turns, make it pleasurable. There is just enough of lightly-sketched character development to cement a sense of pathos and believability. The underwhelming link is Jennifer Connelly's "don't break her heart again" love interest Penny. The sweeping violet blue-tinted passionate scenes set to Berlin's soaring "Take My Breath Away" of Cruise and Kelly McGillis (a great actor sadly not in the picture; though its probably accurate that her character has, too, moved on) is now replaced with a more matured picture of ordinariness in a generic upstairs bedroom with dusky blue pillows. Part of the issue could be the writing: Penny just doesn't have much of a personality, besides being the smiling, occasionally sly bartender. 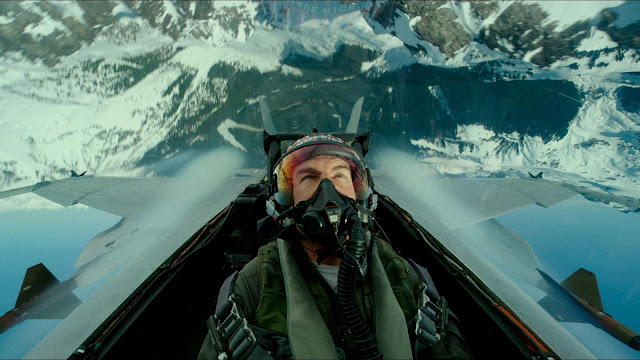 Besides some thrilling drills, what ends up being tremendous in Top Gun: Maverick is its unbelievably well-shot (the photography is by Claudio Miranda), edited (the editing is by Eddie Hamilton) and executed climax and coda. Just on the edge of feeling ponderous, the mission is laid out to us in detailed ways (even though the enemy's origin is hidden): we get the stakes, the computer simulations, the timings, all of it. When we get there, it's momentous--both the suspense and the awe-inspiring visuals. I can't think of a mainstream action movie in years that has felt so rousing. Is it because there's a numbness and distance to all the bombastic, stake-less swirling CGI hodgepodge messes of prolonged fighting and dashing and jumping around explosions that have riddled Hollywood products for decades? The visual effects are difficult to even comprehend in Top Gun: Maverick because the real flying stunts are so visceral. In that respect, the sequel definitely is an exciting achievement, even if the plot and characters are somewhat route and the 80s hyper-masculinity and militaristic nationalism still lingers. But I returned from this film undeniably buoyed. Lady Gaga's "Hold My Hand" is a cliche love song, though her voice is towering. But as Harold Faltermeyer's stirring "Top Gun Anthem" blares effectively, it's not only a flourish of nostalgia but a reminder that action film scores (electronic or symphonic) used to have distinctive pop melodies that enhanced their movie's emotional currency. ***1/2

Posted by MrJeffery at 4:11 PM