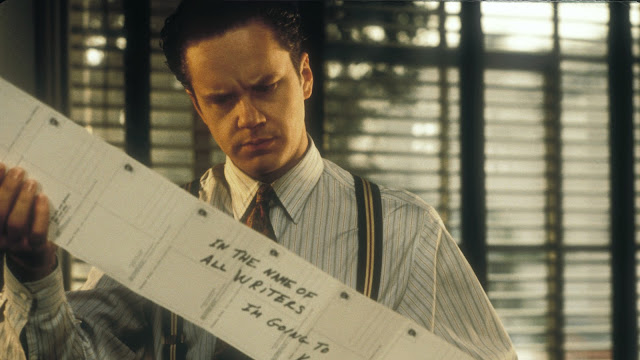 After this year's Academy Awards ceremony, I was feeling somewhat depressed, not only by the waning state of the industry and--especially ABC's--lack of emphasis on artistry, but also the continuing tacit support of toxic masculinity and fear of powerful men. Luckily, a re-examination of Robert Altman's 1992 The Player, ended up being a perfect antidote. Adapted for the screen by Michael Tolkin from his novel, it's a movie that skews the unsavory elements of the Hollywood business, but also embraces the thrill and craft of movies at the same time. In essence, it's a movie for movie-lovers, that is also unsparing in its criticism. 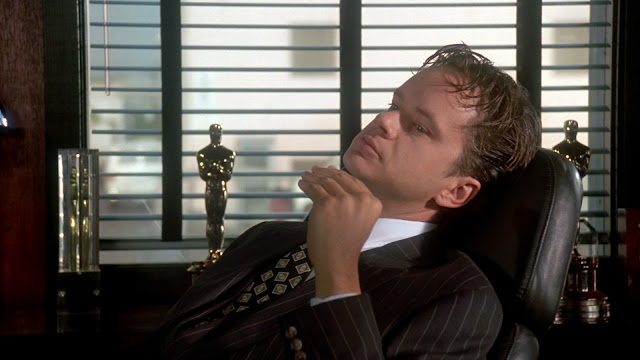 Centered upon the floaty point-of-view of a vain, shallow studio executive Griffin Mill (played by Tim Robbins, with an understated sense of reprehensibility) who drives a Range Rover, and is particular about his bottled water brands, The Player wavers between threads of bland corporate bureaucracies, yuppy character study, mystery and the inherent paranoia of a "from-hell" thriller (a popular genre of its time). Mill is soulless, flat, and money-driven and has rejected hundreds and hundreds of scripts and pitches, rarely doing callbacks. This is, and has long been, the sad, chilly reality of business pertaining to any artform, and it's humorously evoked here by Altman and his team. As Griffin lives in his surface existence of lunches, benefits and innocuous chitchat with famous actors, in the meantime, a rejected writer is terrorizing him, sending him cryptic postcards. 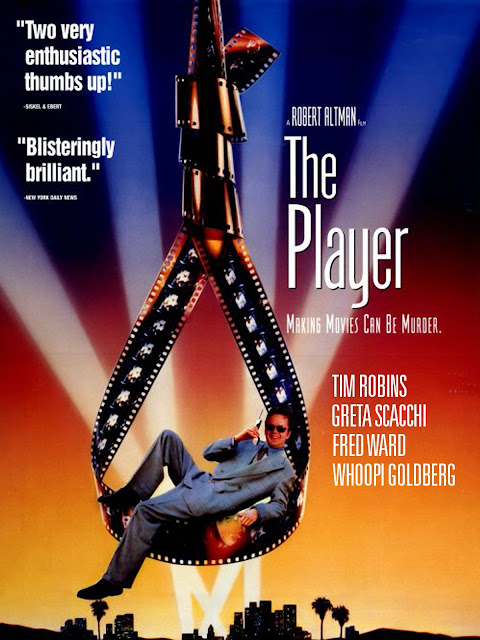 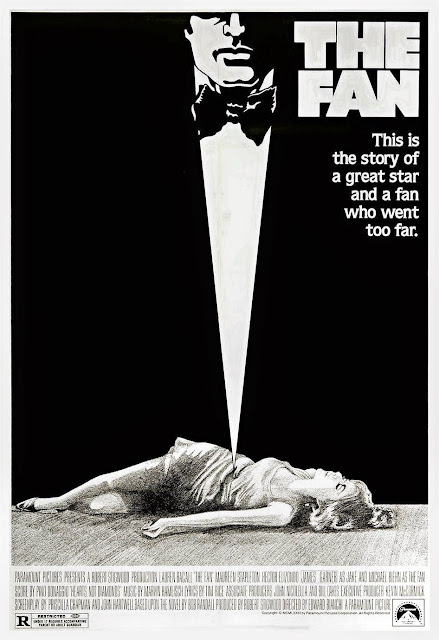 The sinister stranger sending ominous notes are also plot-points in two films that also take place within the entertainment industry--both Edward Bianchi's 1981 lurid Lauren Bacall slasher The Fan and Mick Jackson's 1992 Whitney Houston romantic thriller box office smash, The Bodyguard, released several months after The Player. Curiously, The Player and The Fan share similar posters: The Fan with the white shirt of a tuxedo mimicking a descending white dagger; The Player with a dangling noose made of film reel. Instead of an adoring-to-the-point-of-sick- obsession tale, The Player's stalker is one of revenge. The yarn within the film is delivered with creepy, but also lightly comical-framed touches (1930s and 40s film posters, Hitchcock headshot, Death Valley rattlesnakes, and all). This planted plot was much more tense, eerie and unsettling to me on first watch; on re-watches, I see it as more mild and knowing. Even though Griffin is a repulsive person, the simultaneous tightness of point-of-view and the camera-drifty portrayals of power structures swirling around Griffin--a man likely to be ousted out of his job soon--alongside Robbin's sly, almost deceptively tender performance, makes Griffin's predicament an engaging one. Will yuppy scum get their comeuppance? 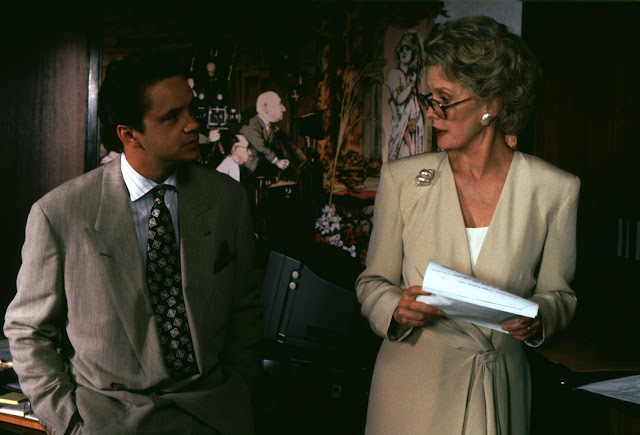 However, Altman and Tolkin do not offer up pat conclusions in almost any fashion--the film frequently upends expectations: beats go on a bit longer than anticipated, mysteries remain unsolved. The Player, like business itself, is an unwinding film of constant molehill bumps, frustration and lingering dissatisfaction. It also renders opposite emotions and reactions of the "products" the industry produces. The film references Fatal Attraction as a famed, and financially successful, test-audience script change to its ending (it is, admittedly, in fact, a pretty rousing finale--and the film is a near-masterpiece, especially in comparison to what Hollywood churns out today); a test-audience change is also amusingly wrought in Habeas Corpus, the film within the film of The Player; a "happy ending" tacked onto The Player itself feels vacant and hollow, especially since our antihero literally gets away with murder. 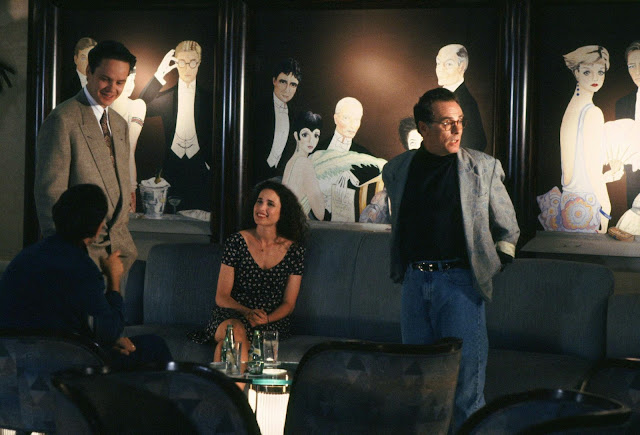 Much of the moods and tones of this satire are created by Thomas Newman, a score I really hadn't paid attention to on prior viewings, but found it to be a completely vital element in The Player's unusual textures. Newman is known for minimal, icy piano and percussion riffs (most memorably in American Beauty)--and his stamp is familiar. It's not quite muzack, but the score has a sort of lackadaisical, metallic and subdued busyness throughout, except when it flourishes extravagantly (like a "traditional" film score) during a murder and the sardonic ending. 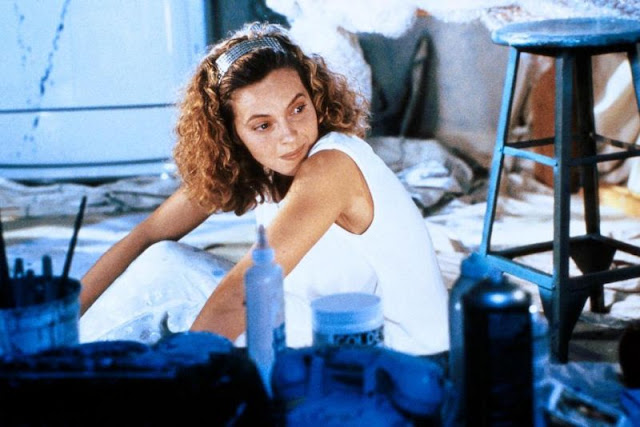 Altman's films often teeter upon congruent relationships: grounded in a sense of realism--the dialogue rhythms and behavioral observation--and also a sense of "movie-ism" (the starry ensembles, the cinematic homages, the use of framing, music and virtuoso editing). In The Player, the obvious falseness of the film's fictions and the sense of semi-reality are constantly in tandem with one another. The movie even moves to a mode of near surrealism, especially with the character of June (Greta Scacchi, who played the murder victim and ghostly golden object of affection in the then-popular Presumed Innocent), a painter, uninterested in the gallery scene or in the business of selling her work, is someone whom Griffin pines for, and who is often placed in dreamy planes: her studio room is full of abstract paintings of white and blue hues, as if she exists literally "in the clouds"; a trip to Mexico finds the couple in secluded luxury. Despite the seemingly ideal set-ups of their scenes, their coupling never feels quite right or at ease, especially as June is the roommate of Griffin's victim (played by Vincent D'Onofrio), her reaction to his death and to Griffin himself, almost equally apathetic. 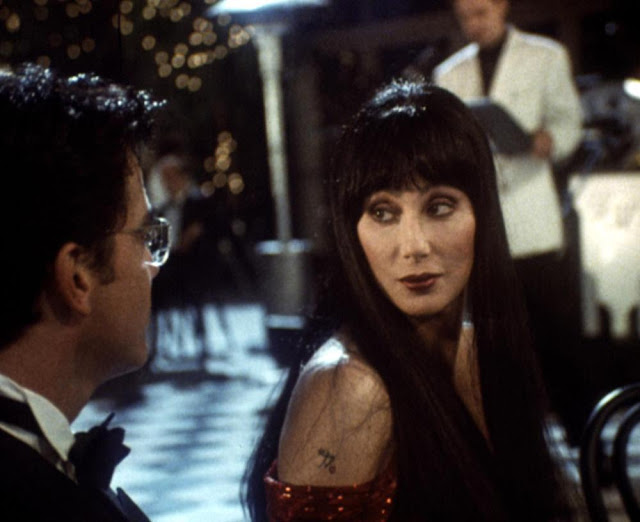 The film is studded with stars, especially in its hobnobbing scenes. Cher is memorable in her "fire engine red" dress at a black & white attire event--described to us by Leeza Gibbons' voiceover from Entertainment Tonight. On his Criterion commentary track, Altman notes he directed the actors playing themselves to behave like themselves. This includes Burt Reynolds calling Griffin an "asshole" as Griffin walks away from his table. These sort of bits of familiar actors in their "environments" feel like intimate peeks into the banality of stardom--their salad and bottled water lunches--but at the same time, they perk ourselves up in knowing recognition and allure of their famous faces. In fact, throughout the movie, the star system is constantly emphasized and skewered. In pitches, industry folks are constantly trying to cast ridiculous projects (like Julia Roberts in The Graduate Part 2... though this sounds like a better and more intriguing movie to me than the last tedious Spider-Man movie I saw). There are also famous people playing characters, like Whoopi Goldberg, as the crackling detective on the film's murder case. It's sort of an absurd character and Goldberg plays the absurdity with her usual wit and finesse. Absurd, too, is another detective on the team, Lyle Lovett, following Griffin around. In a police office scene, he invokes the "one of us" chant from Freaks, almost fantastically, illustrating Griffin's whirring fear of being a just a lowly nobody. Bruce Willis figures too, and seeing him here as the brawny action hero, swooping in at the last minute, there's now an added melancholy given his recent health news. 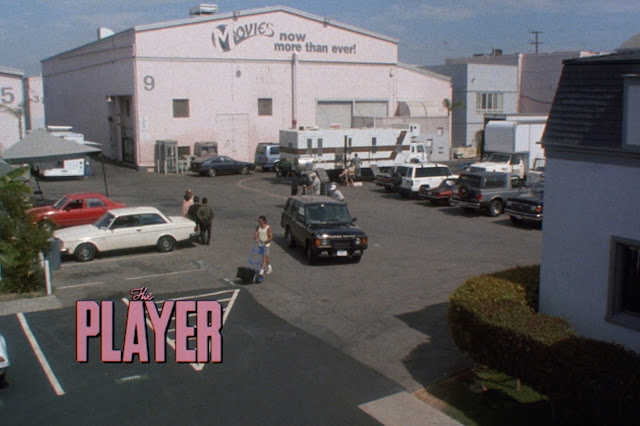 Some have said that movie stars are over, and it's true, that the industry has splintered in a way that The Player couldn't have ever imagined. This time, when I saw the studio's cringey motto "Movies, Now More Than Ever!" I immediately could only think of Nicole Kidman's AMC ad I've seen too many times, "We Make Movies Better"--her solitary screening in heels and a glittery slate suit in a dark theater as a sort of delicate summoning to get us audiences back into the theaters in the wake of COVID and the ubiquity of streaming at home and its plethora of options (including this year's Oscar-winning Best Picture, not from a typical studio of film yesteryear, but Apple TV). Even in celebrating emotional and well-meaning films like CODA, one has to remember the wheeling and dealing, the acquisitions of getting a project like that to screens and into heated (and pricey) award campaigns. Glimpsing CODA's Marlee Matlin in The Player briefly here, was a reminder just how long she's been working--and perhaps, how unrewarding so many years have been for her career-wise. So there are still movie stars (undoubtedly the mash-up of Sandra Bullock and Channing Tatum with slapstick bantering pulled many to the movies last weekend), but there's also more of a blurred line between movie star and celebrity. And property, especially corporatized properties and franchises, seem to have eclipsed the movie star. In effect, unwieldy power remains and unwieldy power structures remain. And power players, especially within a social media culture, can fall fast (Harvey Weinstein was the ultimate kingmaker at the Oscars decades ago, now he is the nadir, the butt of a joke within the most recent ceremony). 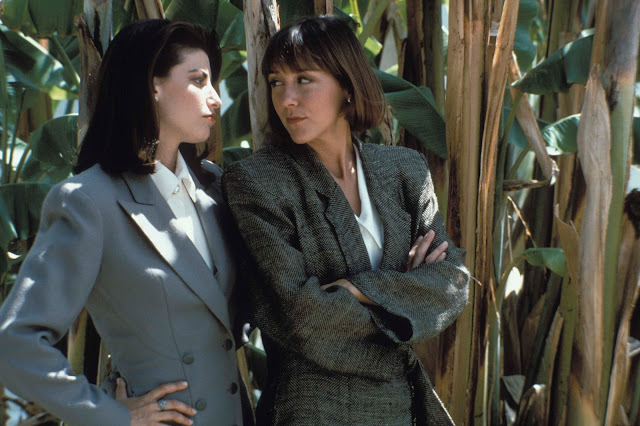 In The Player, characters that seem cockily on-top-of-their game are slowly  whittled down. I was drawn on this viewing to Griffin's script-editor girlfriend Bonnie (played by Cynthia Stevenson). Is it merely aesthetics? The bang-centric bobbed haircut and skirt suits, the breaking of her heel? The way she treats her assistant (Gina Gershon) with simmering disdain (and fear?). The sad and cruel way she is disposed of by Griffin. The sincerity of her sadness and gall when she is surprised by the studio-tested changed ending of Habeas Corpus ("But you had an ending which was true," she emotes emphatically). In essence, she's one of the tragic characters in a picture of characters playing and being played / exploited, and to what end? ****