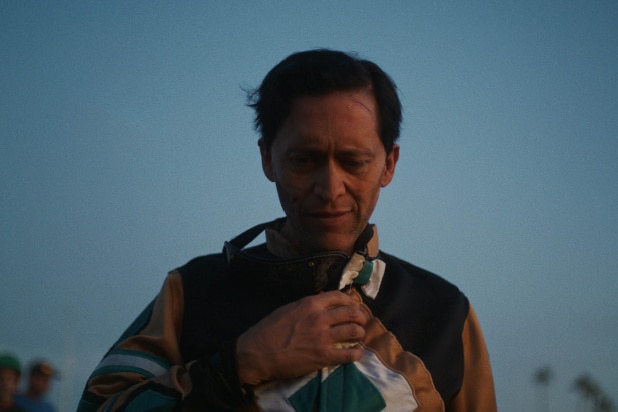 Like Chloé Zhao's remarkable The Rider, Co-Writer / Director Clint Bentley's  Jockey is an atypical, unsentimental horse-riding film about the industry and its ramifications on the body. The movie is headed by a quietly sublime turn by character actor Clifton Collins, Jr., with his spot-on twangy accent, his world-weary, weathered face and disposition. His Jackson Silva is an aging jockey whose life is disrupted when he meets a young man, Gabriel, who claims to be his son (Moisés Arias). Gabriel shakes up Jackson's long partnership with horse trainer Ruth (Molly Parker), as Jackson begins to teach Gabriel the ways of jockeying. 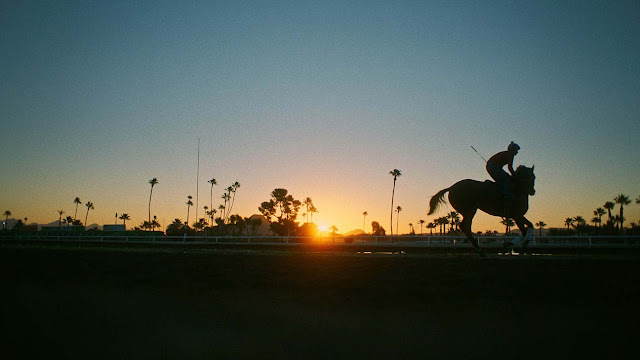 The spare plot may sound a bit like a route Clint Eastwood drama--those elements of mending lost familial bonds through sport--but Bentley's portrait is a little more gritty. Despite the rosy glow of sunsets, palm trees and washed-out blue skies (the meticulously-lit cinematography is by Adolpho Veloso) and the gentle score, by Aaron & Bryce Dessner, brimming with bright strings, the film manages to avoid schmaltz. Having had a father who worked as professional jockey, Bentley draws from personal experience. There are scenes of real-life trainers and jockeys. And the dialogue has a close-to-the-grain feel: stumbling and overlapping. Collins Jr. makes the most of his role--we witness how his life's work has incurred a toll on his body--heart, shaking hand, the extremities of cutting weight, and injuries. His naturalism and singular quality boost the film. Also strong are the supporting players. Parker (who was amazing and completely different in Madeline's Madeline) and Collins Jr. have an ease of rapport (a shared cigarette, for example) that relay the long bond of their characters. A sort of centerpiece song in the movie of both Jackson and his relationships, "I'm Moving On" by Dylan Leblanc, is a moving alt-country highlight on the soundtrack. While the film didn't leave a strong, lasting impression on me, it was nevertheless a nice watch, buoyed especially by Collins Jr., an interesting look at the "behind-the-scenes" of horse racing and the unexpected final beat of the poignant ending. ***

Posted by MrJeffery at 7:20 PM