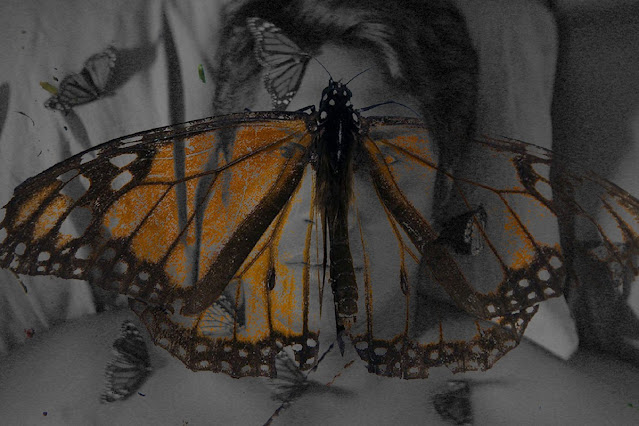 After watching French-Venezuelan Writer / Director (and also Biologist!) Alexis Gambis's Son of Monarchs, I wondered the ways it could be pegged as Science Fiction. On paper, the film is a straightforward drama about a biologist Mendel (Tenoch Huerta) who travels back and forth (both physically and in haunted memory) from New York City to his hometown in Mexico to visit his family. In her book Screening Space, a vital work on Sci-Fi cinema, Vivian Sobchack writes, "The SF film is a film genre which emphasizes actual, extrapolative, or speculative science and the empirical method, interacting in a social context with the lesser emphasized, but still present, transcendentalism of magic and religion, in an attempt to reconcile man with the unknown." These elements of transcendentalism and science are definitely woven in the fabric of Son of Monarchs, even if it feels like a direct tale of a man torn between and or trying to unite two different worlds. Sometimes this drama is subverted. I definitely felt the first half of the film was going on a familiar, traditional path of self-realization and discovery, but then it flips when Mendel goes back to his work and life in New York. Mendel is a very quiet character, so Huerta has to carry much of his role through expressions of his inner whirring. In some ways, I thought of how Gambis's piece would be a particularly fascinating novel, with interiority and flashback its main crux. 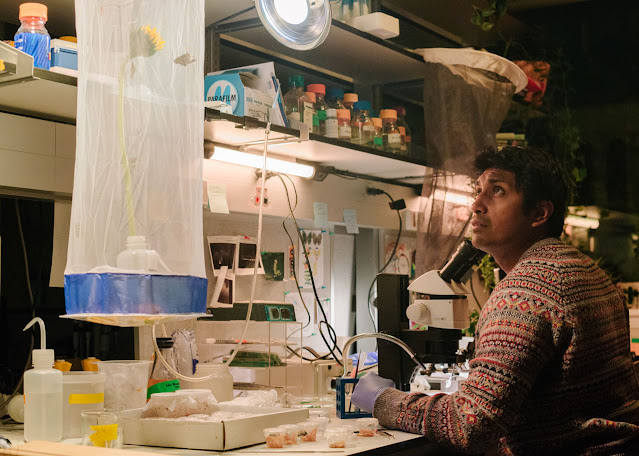 Visually, the film is appealing to look at (the photography is by Alejandro Mejía) and involving. The movie errs however in its scenes of butterfly-filled forests of Mendel's childhood in Michoacán. The overtly sunlit photography, the smiling children--it feels flimsy, sentimental (perhaps because we are viewing it through the lens of Mendel as a child); I yearned for the imagery there to be more layered as it is in the rest of the movie. Obviously butterfly-filled forests are going to pretty--could it be a more arresting visual if more complex, less gilded, more contrasting? 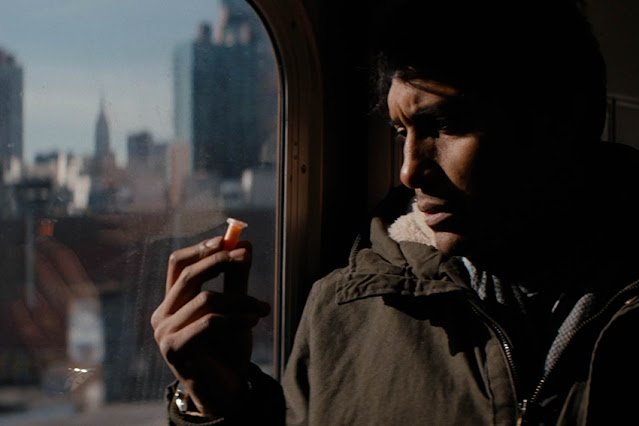 Son of Monarchs is at its strongest when it gets weird, when surreal images coalesce with the mundane--such as microscopic shots of butterfly wings, larvae in petri dishes, peeling away layers with a scalpel and with squelchy sounds, a bravura tattoo-making sequence (a permanent, tangible etching within the film). Also intriguing are the human relationships with the animal world--including the idea of spirits of the dead moving within animals ("to continue the life cycle"). There's also a scene in New York where a woman does performance art of "what's it like to live... to embody a tree?"

There is much to appreciate in the ways in which Gambis's movie traces animalistic symbolism in varied manners, from the spiritual to the corporeal (hand shadow animals on the wall) to the political. In Mexico, we see the ramifications of deforestation and copper factory mining (including the death of Mendel's parents): the tensions between the survival of human-life and natural world ("This land belongs to no one," a character says). In America, we see the rectangular buildings, object-filled rooms of New York; a former horrible President is referenced as well, from his immigration policies to him calling Mexicans "animals." All of these elements are intrinsic and compelling in Son of Monarchs, though it can feel a bit weighty for a movie fronted with the quiet, somewhat nondescript Mendel, despite Huerta's strong acting. Still this is a worthwhile film to investigate. ***

Posted by MrJeffery at 8:45 AM