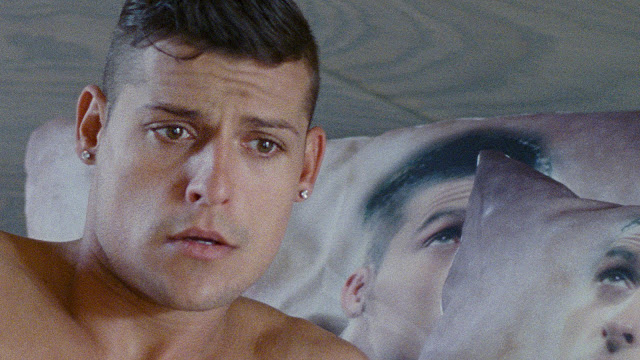 The antithesis of the sharp angles, swiftness, and precision of soccer (football, here in this Portuguese film Diamantino) may indeed be fluffy puppies happily leaping in slow-motion through snowy, pink cotton candy clouds. That is one of the fun, surrealistic images that sticks and kicks off--so to speak--Gabriel Abrantes' and Daniel Schmidt's wonky and satirical portrayal of the titular soccer star (played effectively with doe-eyed earnestness by Carloto Cotta). As Diamantino plays under a "new cathedral"--a superdome open to sky--he's immediately cast as a Christ-like figure, buckling under the pressure of the World Cup and the pitfalls of keeping up a macho facade in the public eye. 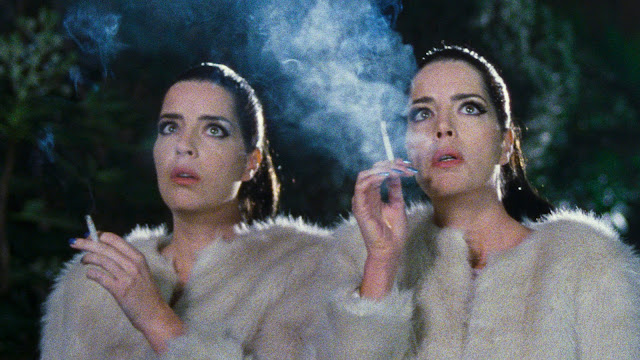 As in much world cinema over this past decade, the refugee crisis comes in focus as a central topic, when Diamantino's party boat rescues a group adrift; the athlete had never thought much of world issues before--his mind only on soccer--which exposes his childlike naivete. When his father passes away, the lonely Diamantino feels an urge to his adopt his own "refugee" (Cleo Tavares)--he mispronounces as "fugee" (a poster of The Score album figures as an in-joke). Meanwhile there are, in what must be a symbolic gesturing of phobia, women around him, plotting--including his shrewish twin sisters (portrayed with a nosiy, over-the-top ruthlessness that occasionally took me out of the picture) and the shady "Dr. Lamborghini" (Carla Maciel) who plans to clone him for nationalistic purposes. With these things at play, and our protagonist circling like an unwitting pig in a maze, the plot swerves around itself into a satirical thriller with low fantasy and sci-fi elements. 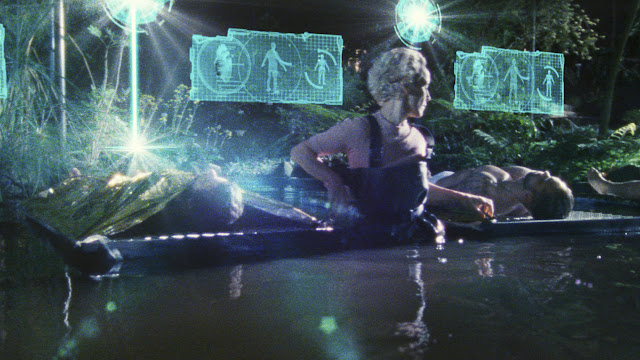 Through its plot mechanics and technical artistry, Diamantino feels very much of the moment in terms of calling out injustices and group-think ignorance. In the soccer star's ads for anti-refugee isolationism, the photography, by Charles Ackley Anderson, switches from its fuzzed quality in the narrative (the film is narrated by Cotta effectively in dream-like recollections) to sharp HD with corny, machismo visuals. There are constant perspective switches from-below and high-up: ashes spread over the edge of a foggy cliff, the superdome viewed from sky, a drone and a T-Rex balloon hovering. This is a very clever movie, but not too cutesy. Even if the approach to timely, important subject matter may feel a tad too glib, hats off to the filmmakers who created something inventive and memorable. ***

-Jeffery Berg
Posted by MrJeffery at 8:07 AM