one night in miami 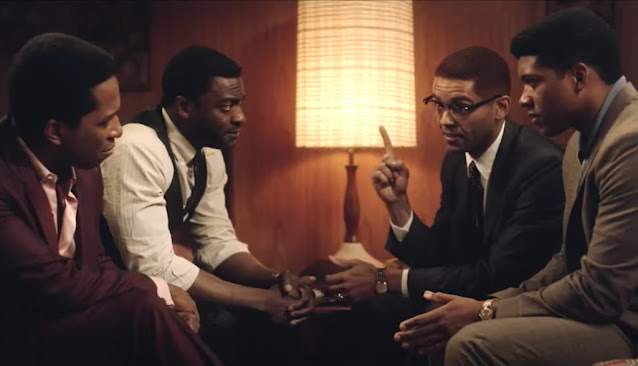 Acclaimed actor Regina King's directorial debut One Night in Miami... is certainly an ambitious film that may not seem ambitious on paper. Adapted for the screen by Kemp Powers from his own play, King's movie is ambitious in its rigorous modesty--an adherence to the symbolic closed-in-upon feeling of the stage. The film centers upon Malcolm X (Kingsley Ben-Adir), Sam Cooke (Leslie Odom Jr.), Cassius Clay (Eli Goree), and Jim Brown (Aldis Hodge, excellent in last year's haunting Clemency)--all four, to varying degrees, important black figures and symbols of their time and generation, in different avenues of expression. Most of the story takes place on a night in a mod-styled hotel room in February of 1964 Miami, the night of a victorious Cassius Clay fight, where the men gather together. The film of this mishmash group is a meeting of real-life friends and though the discussions are imagined, they have an air of believability and intimacy--discussions elegically echoing historical impressions and points of view from a modern standpoint. I thought of Nicolas Roeg's more surreal, less-factually-fueled 1985 Insignificance, based upon a play (by Terry Johnson), which portrays a night of four white icons in a hotel one decade prior in 1954, as an interesting film to compare and contrast to. 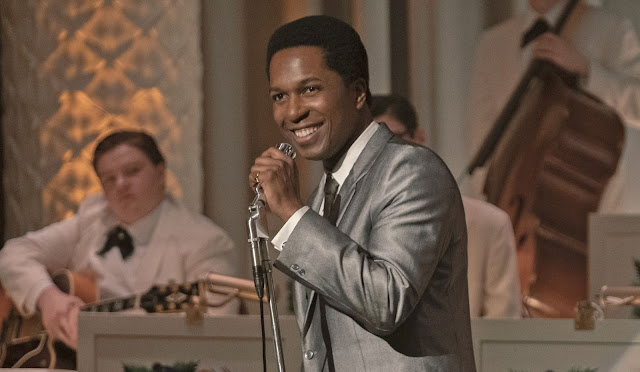 King's movie begins with a very good set-up: of the four men in various moments, all controlled by the whims and racism of whites. The business of these whites depends upon the success and failures of the black men they are pulling for or pulling against--whether it be a successful Clay match-up or inciting fearful tactics against Malcom X (a news broadcast warns of him as being a leader of "a group of Negro dissenters..." preaching "a gospel of hate that would set off a federal investigation if it were preached by Southern whites"). This "reverse racism" bunk still maddeningly persists; by happenstance, this quiet, but simmering film happened to drop in its widest release on Amazon (our current monolith of corporate power who produced the picture) a few days after the insurrection at the Capitol. After the movie's intriguing opening quartet, the movie flashes to its bright main title card, with Clay underwater in a pool--foreshadowing a rebirth to come. 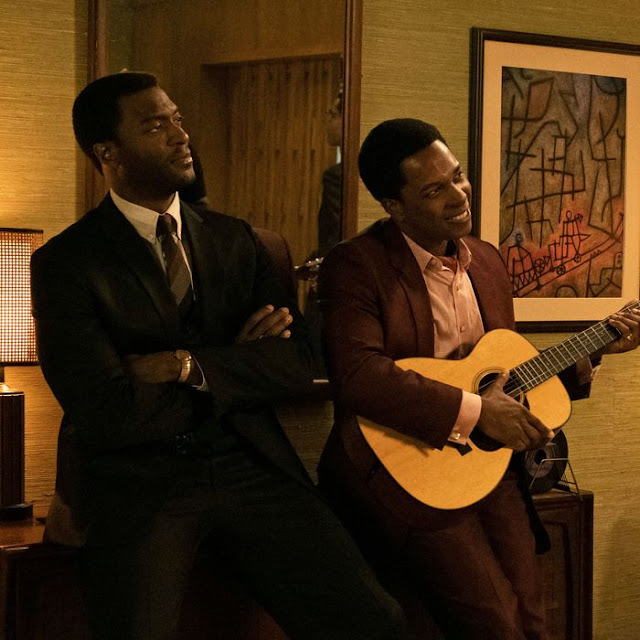 One Night in Miami highlights the tactile, colorfully-rich interior sets (peacock doors, marble-yellow painted walls and trims) designed by Production Designers Page Buckner and Barry Robison and Set Decorators Tamar Barnoon and Janessa Hitsman. Palm fronds abound. These sets manage to feel both luxurious and ordinary, without being distracting, simply melting into the story. It also delivers a visual tension between their kitsch beauty and the significance of the conversations between these men.

While there is an overriding joviality and comradery, there's also differences, especially in how they are dealing with the urgent social issues at hand. Perhaps most gut-wrenching and forceful are the agitations between Malcolm X and Sam Cooke. Malcolm tells him, "... you're performing in places where the only Black people not onstage are the ones serving the food... you have one of the most effective, beautiful outlets of us all. You are not using it to help the cause, brother." Cooke strikes back, explaining the ownership of his songs and label, which supports Black artists, and then simplistically debasing Malcolm as someone who simply stands on a podium "pissing off" people. The see-sawing between these two men is one of the most emotionally-burning strengths of the movie and story. It helps that both Kingsley Ben-Adir and Leslie Odom Jr. are so supremely good in their roles. Ben-Adir has a cool calmness, a directness, and a way of using gestures that shows Malcolm's charisma and deep inner whirring. It's the kind of non-showy performance that might be overlooked, but it's a critical hook in delivering the picture. Odom Jr. is simply fantastic as Cooke, not only does he mimic the dichotomy of Cooke's distinctive smooth yet hard-worn gravelly singing voice, but his turn in the film's talking scenes are magnetic to watch. Odom Jr. also contributes the movie's haunting end titles song, "Speak Now." Goree is also really good, portraying a touch of joy and youthful insouciance on the surface ("why am I so pretty?" he says in the mirror) with a deep well of philosophical musing underneath. Hodge's Brown is the more understated role and, perhaps, the least famous character of the bunch, but Hodge's acting is nonetheless equally as solid.
Despite the high points of the film under King's assured direction, at nearly two hours, with dialogue that's often inferring double-meanings, I would argue that the film runs a tad long, but I was won over by the conclusion, a final quartet that transcends beyond the hotel and time that is an extraordinarily impactful one. ***
-Jeffery Berg
Posted by MrJeffery at 2:23 PM