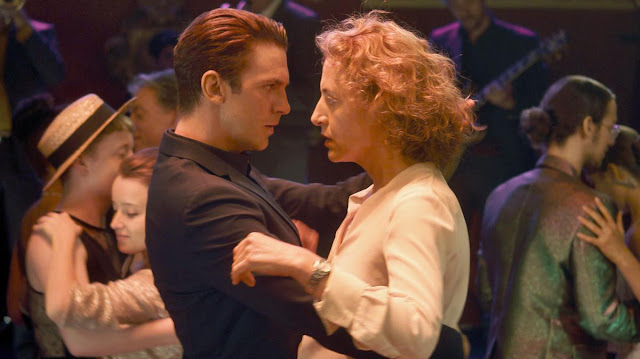 In Writer / Director Maria Schrader's (Unorthodox) beguiling I'm Your Man, an archeologist, Dr. Alma Felser (Maren Eggert), faces an unusual conundrum: for a three week trial run, she's been given the "man of her dreams" (Dan Stevens as Tom)--literally one that fits all her desires, including the lingering wistfulness of her youth. The trouble with Tom is that he isn't a real person, but a humanoid robot, foisted upon her by "Employee" (the always good Sandra Hüller, refreshingly against type here). The fiercely intelligent Alma is very resistant, her large, searching brown eyes are so human and in such a contrast to Tom's glazed-over blue-eyed gaze. While working on a rigorous research project involving cuneiform, she is also dealing with her father's dementia (Wolfgang Hübsch) and recent losses, including the separation of her and her ex-partner (Hans Löw). All of these painful moments feel extremely private, wounds that Alma carries, without much help from anyone else, except for some support from her sister (Annika Meier). 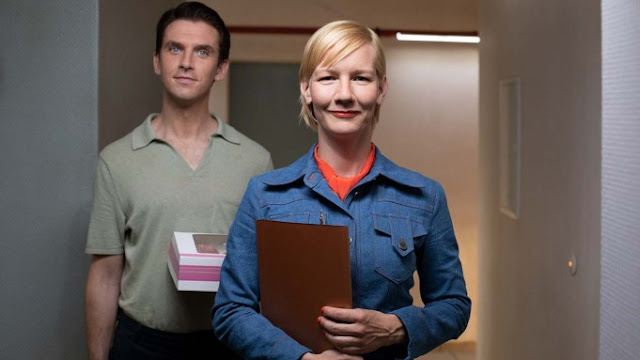 Schrader's portrait is a web of tangled emotions and ethical dilemmas. As Tom navigates his life among humans, he discovers they laugh at other people's pain (a couple in a coffee shop looking at viral videos of human mishaps) and the film, too, exposes different ways humans can hurt one another both physically and emotionally. The cold, sterile, white, gray and black emotionless architecture and designs of modern, urban Germany is an effective dissimilarity with the ancient tablets of Alma's studies and her homey, messy flat of stacked books (Tom immediately tidies everything up to which he realizes, after her reaction, that he's to put it immediately back to the way it was). In Alma's struggle, she is always looking back and forward, with deep uneasiness about Tom and the nature of the experiment itself. 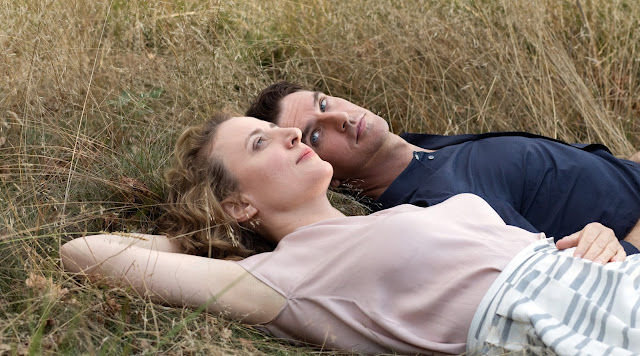 The interactions between Tom and Alma spark across the gamut of feelings. Stevens, in another shapeshifting (so-to-speak) performance, does sturdy work with this complicated robot--one that expresses emotion in a not-quite-real way, and speaks German to boot. Eggert's Alma teeters between valleys of disdain, discomfort, anger, and desire in a mostly quietly stern, buttoned-up demeanor, her speech halting, shivery and staccato in conjunction with Tom's legato, precise, flat phrasing. 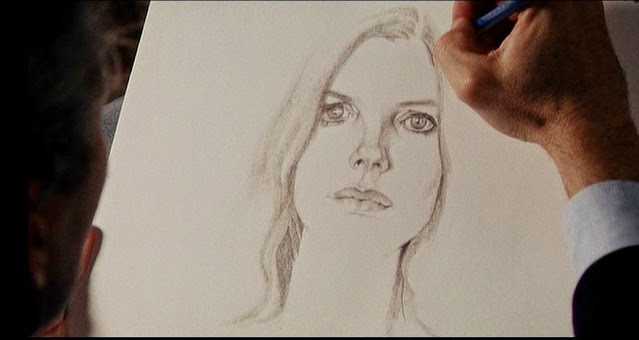 Recently I re-watched Writer Ira Levin, Screenwriter William Goldman and Director Bryan Forbes' 1975 The Stepford Wives and found it utterly mesmerizing. On a simple level, there is much shared with The Stepford Wives and the concept of I'm Your Man, though Schrader's film has a brighter tone and look, even as it navigates its queasy sci-fi credos. The flip of a woman with a male robot is a compelling one--as we've seen many more movies like Stepford Wives where males are bonded with female robots or other robot companions in general. One can think too of the horrifying 1977 movie Demon Seed, where Julie Christie's character is raped and impregnated by an AI named Proteus. There's a gentleness in I'm Your Man, and Stevens' portrayal, that doesn't dig into the same level of direness and macabre as those other pictures. And yet, that gentle aura, the waving of Alma's hand through hologram humans, almost makes it seem like it's all too possible--and perhaps not that bad?--which is an eerie, discomforting feeling for both Alma herself and the viewer. ***

Posted by MrJeffery at 6:07 PM