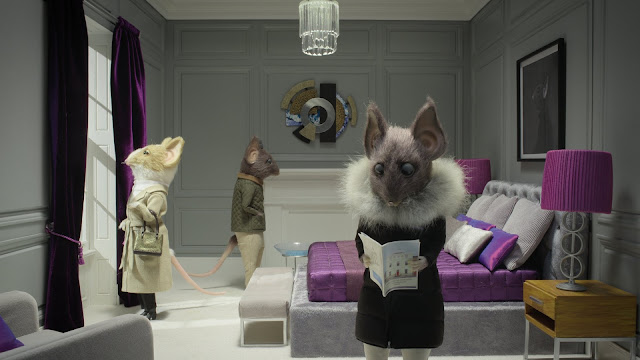 Where are we going and where have we been? These are just some of the philosophical musings that the gorgeously-wrought stop-motion film The House ponder. Directed by Emma de Swaef, Marc James Roels, Niki Lindroth von Bahr, and Paloma Baeza, The House is split into three tales ("And heard within, a lie is spun," "Then lost is the truth that can't be won," and "Listen again and seek the sun") that take place in different eras and from different perspectives. Each tale are unwinding rooms of secret doors and surprises, going through the textures and innards of the house. 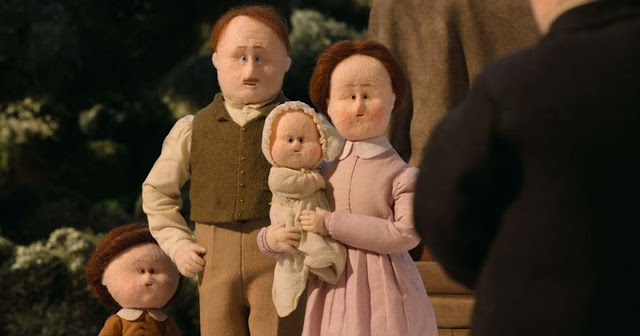 A ghostly tale (directed by de Swaef & Roels) is the opener, akin to Shirley Jackson or the under-the-skin morbidity of Roald Dahl, of a young girl and her baby sister who watch their parents' behavior go through startling transformations in their plush new mansion. The dialogue and action is fairly straightforward, almost a little too pat, yet throughout, it becomes more eerily unsettling. Part of this is due to the exquisite visuals, especially the special effects and stop-motion animation; the production design for the film is by Alexandra Walker with set decoration / art direction by Nicklas Nilsson. In this chapter, the moon-wide, beady-eyed faces of the doll characters manage to be remarkably expressive. 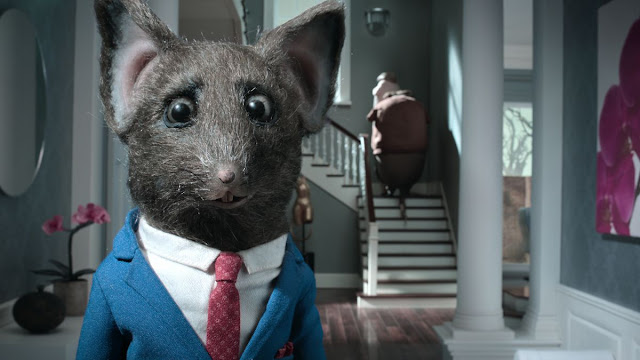 The second tale (directed by von Bahr), placed somewhere in contemporary times, may be the most familiar one to current concerns, especially city real estate. A frantic, greedy developer (portrayed on-the-nose by a rat in human clothes) cheaply and hastily flips the house with streamlined modern accoutrements and accents (you know--the granite countertops and mounted flat screen TV, a strip of ugly purple tile in the luxury bath), only to be ravaged underneath and within the walls by scuttling beetles and squirming larvae--for this to accumulate into a Busby Berkeley-styled musical number by the creepy-crawly critters is quite the amusing centerpiece of the whole film. 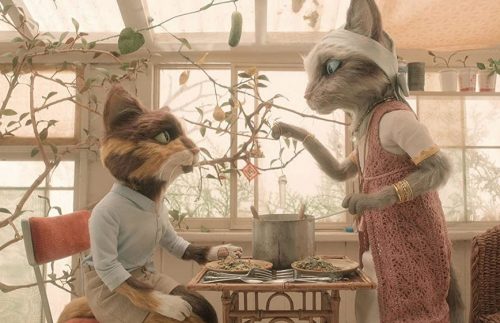 A third story is even more disturbing, taking place gauzy sun and fogged-over drowned world of our future as a landlord desperately dreams her dream-home as her house literally is sinking into the sea. The complexity of each of the stories' protagonists and the cautionary theme of greed that runs throughout make The House an unnerving and compelling trio of stories; even if it isn't necessarily a horror movie, the visions presented are unsettling. The strong voicework includes some recognizable actors, including Helena Bonham Carter, Mia Goth, and Jarvis Cocker. Save for the movie's musical number and the end credits song (sung and co-written by Cocker), the music by Gustavo Santaolalla, like most of his work, is more ingrained in the movie's atmosphere than it is flashily obvious. ***

Posted by MrJeffery at 2:03 PM