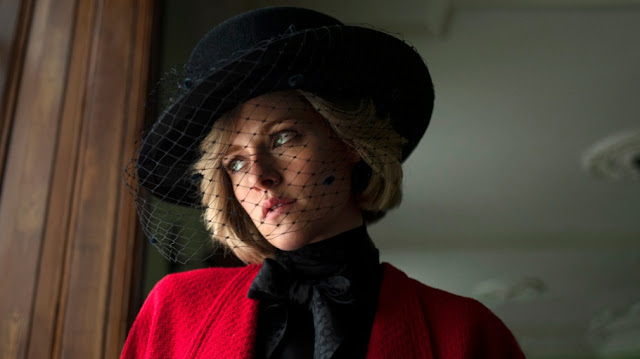 Pablo Larraín's Spencer follows Princess Diana (Kristen Stewart, in a showy but affecting turn) within a few days of the Christmas holiday at a remote manor, near where Diana herself grew up as a child. Part of the mystique of the royal family--recently, there have been a slew of notable portrayals of them--is that we can truly never know everything about them. They stand somewhat removed from us, even though they are integral to shared world events, with chilly glamour. What makes Larraín's film, written by Steven Knight, so bold, is that goes inward, with tenuous grips on the factual. It's a swirly psychological portrait rather than a rigid biopic or even a rigid sketch. What may be most accurate, is Jacqueline Durran's attention to Diana's dazzling costumes: chic ensembles of the early 90s, especially designed for Diana, for each event of the day (church, dinner... and longingly, for Diana, as her finger runs over the tag--the day of departure). 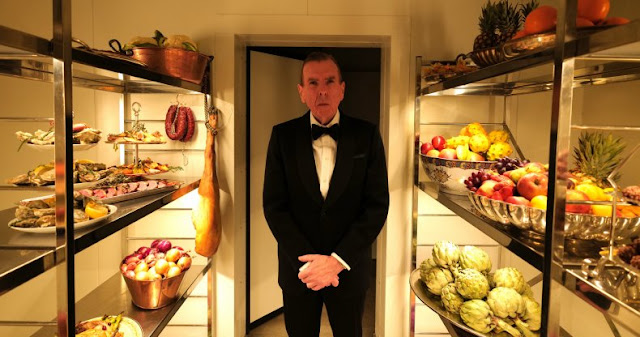 Many of described the opening of the film (noted as a "fable within a tragedy") with Diana, late to the gathering at the house, driving her convertible to a roadside eat-in, symbolically saying not knowing where in the world she is. But actually, the film begins with a extremely militaristic and dour set-up within the hollows of a spacious kitchen with the righting of the staff (this is such a deep contrast to the puff-pastry, lightly comic upstairs / downstairs shenanigans readying for a Royal visit in Downton Abbey, a pre-COVID picture release, and just a year after Prince Harry and Meghan Markle's indelible wedding ceremony; Spencer happens to land in the year of Harry and Meghan's termination of being senior royals and their stepping back of being representatives of the Queen). Already, we can feel the stuffy, airless quality of the house and its guests and staff (including large-eyed Timothy Spall as a very-watching watchman). Spall's effective turn manages to be both imposing (especially when he creeps upon Diana in what could be embarrassing moments) and pathetic (when considered how he merely is a small cog in the machine of the royal's loyal workforce). The roaming house is constantly referred to, especially by Diana's young children, as cold. Knight's on-the-nose symbolism may be too much to bear for some [doomed pheasants, stitched-closed curtains, the Queen (Stella Gonet, her haunting countenance) in one of her only verbal communications in the film, basically pinning Diana as "currency"), but I found its metaphors enjoyable, like those laden within a musty, old-fashioned read, and distancing from a potentially emotionally-wrecking movie/ The script's parable qualities almost akin to sweeping journalistic generalizations of the royals, and of Diana herself. 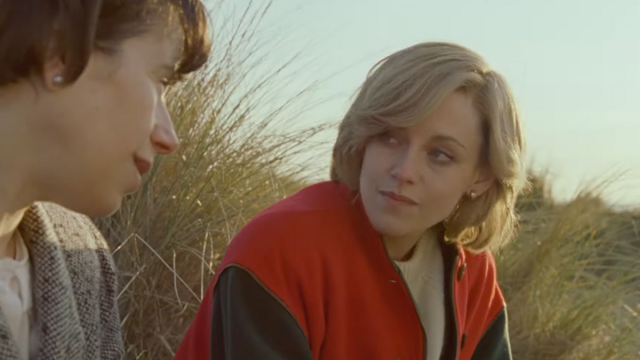 We see Diana, adoring her children and her children adoring her as well; we also see the close friendship of her and her dresser Maggie (Sally Hawkins, another strong supporting actor in a small role, infusing it with complexity). Otherwise, this is a universe absent of human warmth. Her husband Charles (Jack Farthing) is portrayed in brown-beige gloom as a grotesque shell. 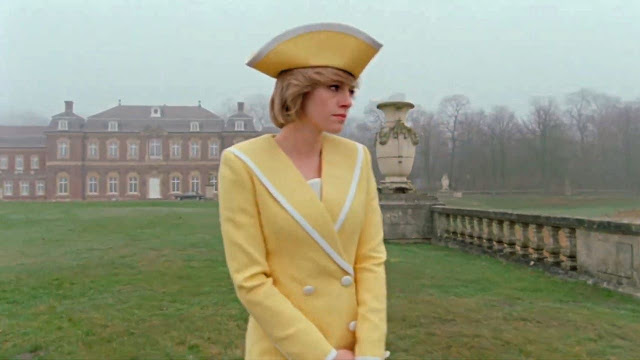 Naggingly, off in the fog-drenched near-distance, is Diana's childhood home, the estate of her titular maiden name, a lost touchstone of dirt-on-the-knees happiness and the what-could-have-been, now abandoned, with crumbling stairs. Some of have said this isn't factual, which of course, isn't the point of this film; this nightmarish fairytale strives to create an overriding feeling of longing. Even knowing that Diana died too young, a mere few years after this film seemingly takes place, is enough to cement this as tragic. As we run through a montage of her in various dispositions in iconic outfits, the outfits are truly cinematic; they are equally important (that ruffly, white wedding dress of optimism, Stewart beaming in it) as they are meaningless. We've seen many movies of violence against others, to the point where we may be numbed by it, but the violence against oneself, is still tough and triggering for many--is it because humans, fundamentally, are wired to survive? Spencer shows Diana's bulimia in many demanding ways. While watching Diana cower over the toilet in a white gown speckled with gold, I couldn't help but be entranced by the surroundings: the gorgeous teal tiles and brass fixtures of the breathtaking bathroom. Is this sharp dissonance between aesthetic and bodily trauma part of Spencer itself in presentation and of its subject? I am reminded too of Larraín's treatment of the blood-stained pink Chanel suit of Jackie. This can be off-putting to some, but I found Spencer completely entrancing for its layers, its push and pull of disgust seemingly with itself and its subject's push and pull disgust with herself, and the film's charred melancholy. 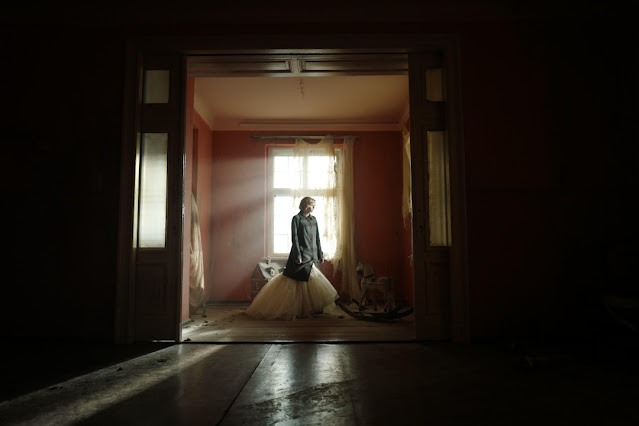 The fuzzy, peachy-maroon cinematography by Claire Mathon imbues the picture with the irretrievable. Jonny Greenwood is back with another jolting score that adds to the ostentatious and untethered feel; one of the main themes is an exquisite piano melody that scales up and down and around, including over the title card and a Kubrick-esque high shot of Diana in her convertible (admittedly, it was then I knew that this movie was hitting me). The melody returns on pipe organ as a funereal dirge as the royals depart the Christmas church service. As with many moments of the movie, including the ghost of Anne Boleyn (reminiscent somewhat of Hitchcock's lingering ghost in Rebecca), there's almost a darkly wry humor to the music's use there. As with the burning of Rebecca's Manderley, Diana and Larraín will burn everything down with Mike + The Mechanics and KFC. 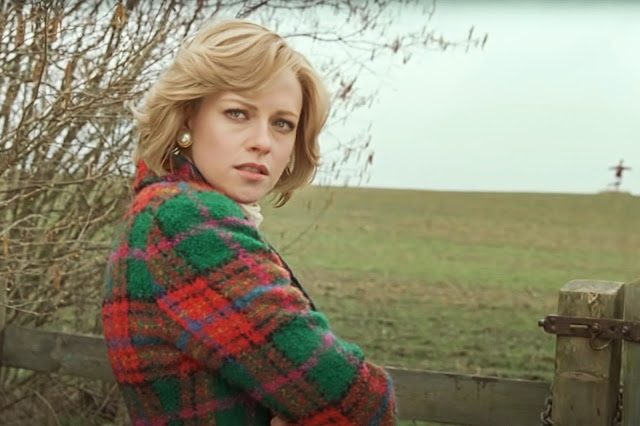 Kristen Stewart is an actress I find very watchable, but not always convincing; in Spencer, while occasionally losing myself in it, I find I am watching Stewart busily play Diana--wiry nerves, clipped British accent and all. Yet, that idea of performance, the casting of a renowned celebrity actress playing a renowned celebrity, is part of this movie's charm, charge, and sadness. Ultimately, Stewart's portrayal of this harrowing inner turmoil is compelling. ***1/2