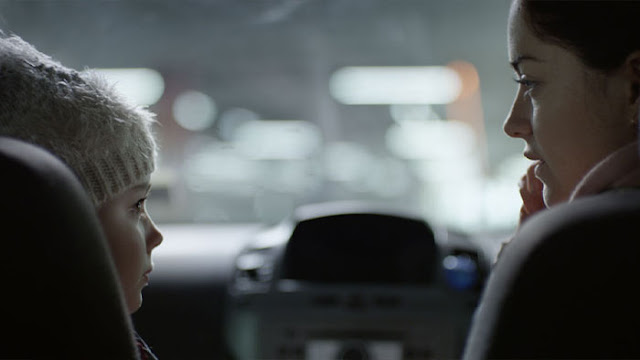 In the beginning of Paddy Breathnach's film Rosie, a young woman (Sarah Greene) is in a car with three kids in the backseat and one in the passenger, desperately dialing numbers for a place to stay--for at least one night. Her husband John Paul (Moe Dunford) is working in a restaurant kitchen, almost at the end of his shift. The family, squeezed out of their last rented home when their landlord sold it, have dwindling options of a place to stay as each minute, each hour ticks by. 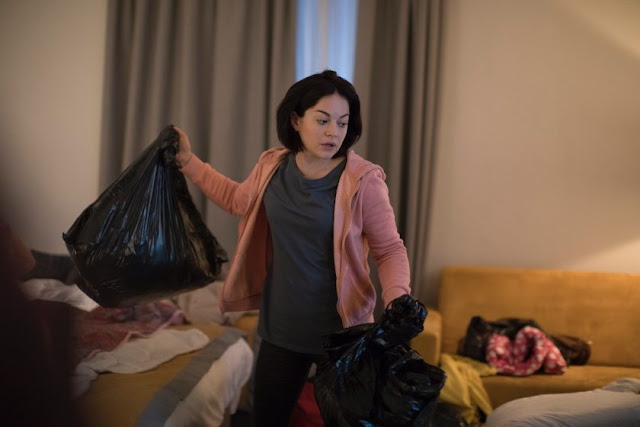 Taking place overall within the space of a near two days, Rosie, is a close, compelling, and breathtakingly anxious portrait of a family living out of their vehicle in Dublin. Breathnach, with cinematographer Cathal Watters, employs hand-held camera and set-ups of tight, cramped spaces to add to the feel of the movie's claustrophobic situation. Acclaimed writer Roddy Doyle's first original screenplay in years, is precise in its dialogue and devastating in its intimacy. What I appreciated about this film particularly is that while tension simmered throughout, Greene, in her rigorous, believable turn, doesn't constantly blow up at those all around her, who thwart her at nearly every turn. How many times can one scream and get anywhere? This pent-up howl is Rosie. Greene is aided by a young cast playing her children with grace and spontaneity. The film was released in limited release in the States in 2019, but has seemed to have fallen by the wayside in favor of flashier work. This is definitely another fine picture from our era in world cinema that compassionately and urgently addresses economic anxiety for those who have been ignored. ***1/2