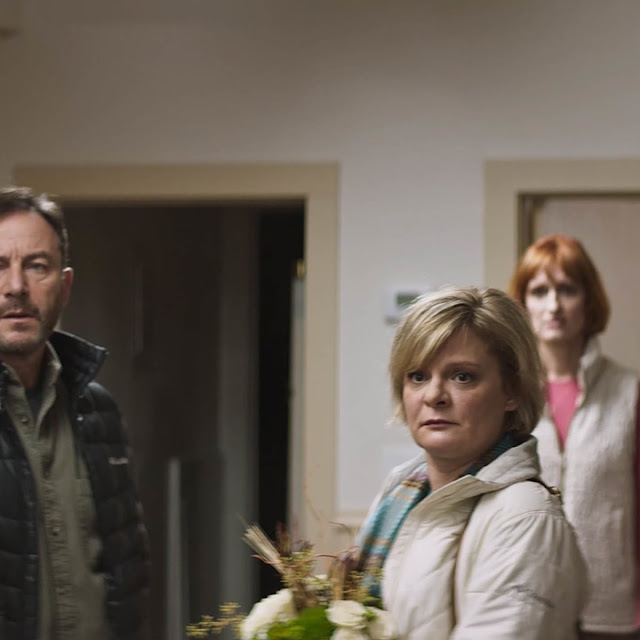 There are comedies of manners and there are dramas of manners. Some of Writer / Director Fran Kranz's daring and absorbing Mass brings out the latter. Much of the film unfolds within one room in an Episcopalian church between two sets of parents, both grieving losses of their sons, and both confronting one another in person intimately for the first time. One couple's son committed a mass murder in a school; the second couple's son was one of his victims. Before this meeting, a room has to be set up, and we witness the passive aggressive banalities of this occasion through a woman (Breeda Wool), an assistant at the church, bringing a grocery bag of superfluous snacks and bottled water. Folding chairs have to be placed, the table pitched in the right way. In some sense, it could be meta of setting up a film itself--this light needs to go there, the camera here, this prop there. The drama of manners is all the little tics and annoyances one can have with one another while preparing an emotional event. It may seem insignificant in the face of the wallops to come, but the set-up, and Wool's performance, positions the film with a light, but not shallow, touch in an extraordinary way.

A cynical viewer may find Mass as purely an exercise in showing off good acting--unseemly for such harrowing, true-to-life subject matter. But as in many enduring films and plays that echo the devastations of our time, Mass unfurls itself as a study in human behavior and cements a belief in the vitalness of human interaction. I thought of the mood and feel of Robert Redford's Ordinary People: from the simple white typeface against a black background of its opening credits, to its portraits of wrenching loss, to its awkward interactions--its drama of manners--that skirt around the tragedy in the center (a gesture of flowers, statements like "I didn't mean to offend" and "I say that as compassionately as I can"). 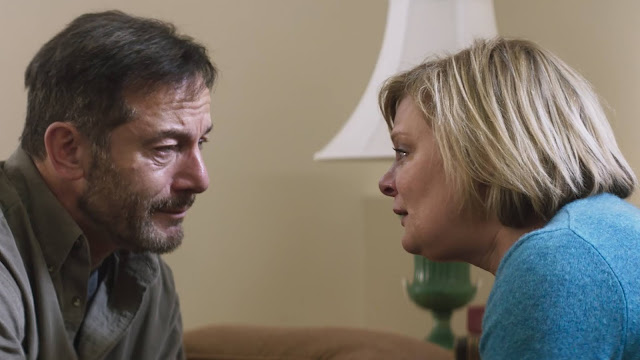 Kranz's script is full of complexities, his direction and blocking well-orchestrated. The couples start out close together at their roundtable but as they talk more explicitly about the tragedy, they slowly start to move apart from one another in the room), the film would not work without its actors. Amazingly, attributed to both cast and script, the film never feels dull in its relative staticity.

The word acting is in the word distracting, but these are actors who are able to work sorcery in expressing a lived-in existence. Raspy-voiced, a pinched countenance holding back a mixture of volatile anger and grief, Martha Plimpton's performance as Gail is compelling on every level from small moments to a near-end tearful monologue of a humorous moment from her child's past ("the child on him, I could feel so much life"). The same can be said of Ann Dowd as well, an actor who is always a pleasure to watch in her transference of so much feeling (in good and in villainy), who registers peaks and valleys of emotional release. During my viewing, right after Dowd's final story, church bells started to ring out my window, an eerie coincidence. Her and Plimpton's performances have stuck with me for hours afterwards. As Richard, Reed Birney, might have one of the trickier roles, probably a character that's usually inexpressive, and the only one truly buttoned-up and dressed-up for an occasion--in a tie and jacket--he seems stuck to data ("You have access to all his records...") and resistant to the meeting overall; but Birney is never one-note: his performance registers range, and here and there, through remembrances and conflict, we see him break.  It's telling that Dowd's Linda waits to tell her final story after her husband has left the church. Throughout, we see Richard and Linda more at ease to talk freely of their son as a young child; but as they talk about him closer to being older and the age in which he committed murder, they hold back, "trying to restore the memory of who he was." Overall Mass is an ensemble picture of masterclass acting, but there is no gimmickry here. By the end, after a moment of silence, a sort of spell is broken, and the drama of manners comes back ("Thank you for the flowers..."). And finally we are left with a field, a contrast to the small room we were so cloistered in,  below a mountain where the school lays, a ribbon blowing on a barbed fence in the howling wind. ***1/2

Posted by MrJeffery at 4:38 PM