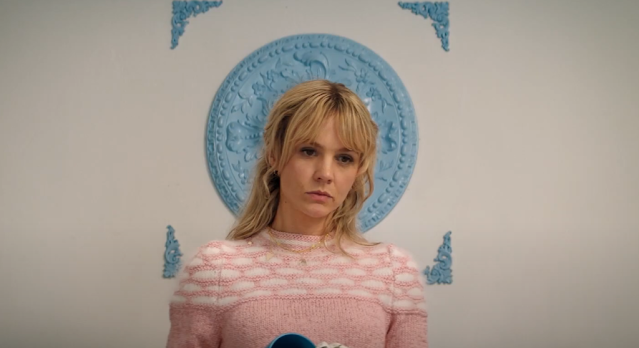 Consider me floored from the first viewing of Promising Young Woman, a myriad mixing of familiar film tropes painted over in bright candy-colors. Writer / Director Emerald Fennell's (who also features in a sardonic video tutorial) script is a perfectly-plotted vengeance tale of Cassandra (Carey Mulligan) who exacts retribution on those who wronged her friend. I thought of all the films, many of which I personally love, that Fennell's movie perhaps purposefully and unconsciously channels and riffs on such as Fatal Attraction (a light flashes on and off upon Cassandra in the darkness), Single White Female, Kill Bill Vol. 1 & 2, or even something like Sleepaway Camp II: Unhappy Campers, and many glossy music videos of female pop icons from the past few decades of Mulligan's generation (Britney Spears' "Toxic" figures brilliantly with Herrmann-esque scratched strings, courtesy of Anthony Willis' orchestrations, who scored the picture). The film gets more complex and less "spelled-out" when Cassandra's journey becomes entangled with those directly related to her friend's assault: we see the ways in which all genders and positions of power can be complicit in the wake of sexual violence, and Cassie's attempts at comeuppance are carried out in mostly satisfying ways. The best thrillers flip the mirror upon ourselves, testing the audience's ethos and pathos. Much of Cassandra's backstory shines through Mulligan's layered performance--lines delivered with a hardened, precise delivery.

I love the attentive casting, especially the too-infrequently-cast Jennifer Coolidge as Cassandra's mother. Coolidge's eyelash-bat-quick shifts between comic and tragic, her trailed-off line deliveries are affecting. That she is famous for teaching the "bend and snap" in Legally Blonde seems particularly ironic in this movie. Laverne Cox unhooks the traditional, demure, "supportive best girlfriend" role. The geeky, seemingly harmless young men (Adam Brody, Christopher Mintz-Plasse, Bo Burnham, particularly excellent), who would be depicted as lovable goofballs in dim male comedies are more baleful here. Alfred Molina, as a psychologically-damaged lawyer, is the perfect choice for a short portrait of over-heatedness and desperation. Many of the characters' names pointedly refer to past American Presidents, especially the story's main offender. 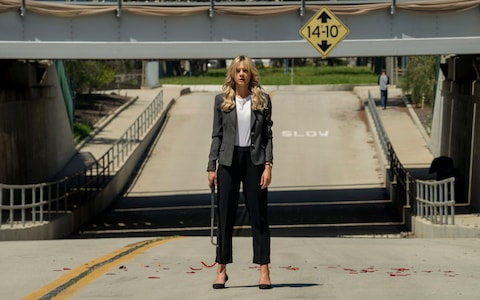 Nancy Steiner's vivid costuming highlights the uniforms of the everyday (scrubs, floral robes and tops, khaki pants and blue Oxford button-downs, and the cream-colored dresses and tops of conservative brunch-wear) with the more gaudy nightwear disguises Cassandra dons (including the now-iconic nurse get-up with a blue cotton candy bob wig). Throughout Cassandra sports a gold broken-heart charm necklace, Skittles-colored nails--even sipping a juice box in a scene--suggesting her tenuous grasp on her childhood friend. The art direction and sets, especially Cassandra's parents house, are colorful, stirking and eye-catching and like many adronments in the film, a jumbling of time periods (Cassandra's parents seem keen on pink, florals, cherubs, and Victorian figurines in hoop skirts). 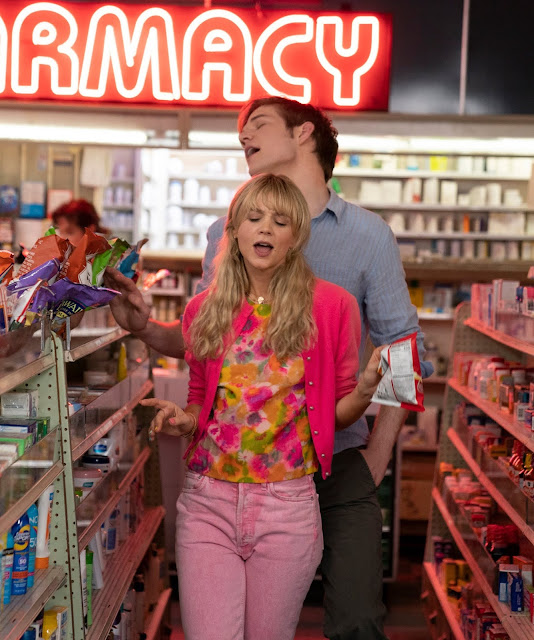 The soundtrack is a mostly all-female affair of celebratory dance-pop--from DeathbyRomy's cover of "It's Raining Men" (yay to having a main titles credit sequence in 2020!) to "Stars Are Blind," Paris Hilton's beachy underrated pop gem from 2006, is infused with new life in a pharmacy sing and dance-along. Sometimes the songs, light and fizzy, like Spice Girls' "2 Becomes 1," undercut rosy romance scenarios of their lyrics with the sinister reality of male predators (American flags and dogs, stuffed cuddly ones and wolfishly painted ones, are motifs throughout). "Once Upon a Time There Was a Pretty Fly" from The Night of the Hunter, becomes a raw, eerie interlude before the film's climax.

The cinematography, by Benjamin Kracun, aids in the varied atmosphere as well--moving from a music video-like neon synthetics to romantic comedy sheen to melodramatic drama (a clean, buttery-lit front porch scene with Cassie's friend's mother, played by Molly Shannon, is reminiscent of Julia Roberts' idyllic new front porch life in Sleeping with the Enemy). Wagner's Tristan und Isolde swells and swells as Cassandra, after smashing in a truck with a crowbar, stands in the middle of a road, a train passing over the bridge above. The killer conclusion, a total upending of the happy ending wedding of comedies, takes Juice Newton's bittersweet anthemic country tune "Angel of the Morning" to new heights. ***1/2

Posted by MrJeffery at 7:01 AM