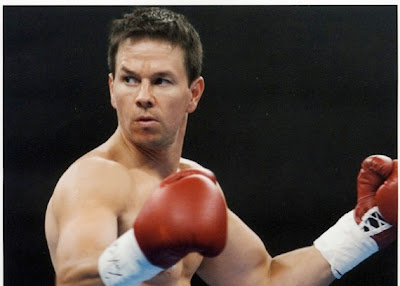 The broad, flashy style of David O. Russell is just right for his latest The Fighter

At first glance, The Fighter

may sound generic--a hybrid of the bleak The Wrestler

and the against-the-odds Rocky

. But the picture feels fresh and original. The script (by Scott Silver, Paul Tamasy, Eric Johnson), full of moments of surprising levity, is more family melodrama than a typical sports film. Russell nails the early 1990s period detail of a dying industrial town (bleached denim, cropped jackets, teased bangs and an at first amusing, then moving use of Whitesnake's "Here I Go Again"

). The cinematography by Hoyte Van Hoytema (Let the Right One In

) cleverly makes use of Beta to recreate the look of the match sequences and in one of the film's most interesting subplots, an HBO documentary which exploits Dicky and his crack addiction. There is a beautiful moment at dusk, the sounds and light caught vividly, where Micky is on a quiet street, about to pick up his future wife for their first date. Russell is able to helm a movie that's funny and uplifting that's also ambiguous and sad. The luminous performances, especially Bale (unrecognizable and more expressive and better than ever), keep it lively. Dicky's battle with drug addiction is heavy-going, but Russell and Bale inject the story with humor and pathos. Melissa Leo moves from comedy to flares of anger and despair, disappearing into her character as completely as she did in Frozen River

. Amy Adams lends fine, quiet support as Ward's steely girlfriend, a bartender and college dropout, trying to move on. And who else but Wahlberg, usually underrated, could have given such a sensitive portrayal (physically, he is a stunner here) with such conviction. ***1/2