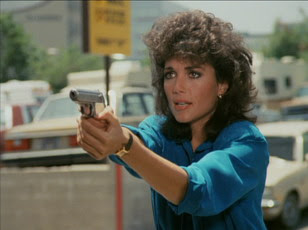 I started humming a tune as I sped off to Target the other day. (I often have these moments of reflection when I’m on my way to or in Target. The store is a source of inspiration, and reasonably-priced goods after all). For a moment, I couldn’t quite place the song, and then it hit me. Riptide! A detective show that ran from 1983 to 1986 starring Perry King and Joe Penny in short 80’s shorts. How could you not get caught up with such a catchy intro tune?

This opened the floodgates to all the forgotten and sometimes obscure TV shows of my childhood. Speaking with my American friends, I realized that I may have had the opportunity to see many shows that they missed – either that or I was just neglected as a child and watched way too much TV to compensate. Today I will share some of my favorite 80’s TV theme songs with you.

Airwolf! Cold War themes, James Bond type espionage, Jan-Michael Vincent in leather bomber jackets and aviators. I remember the thrill of seeing those helicopter blades floating into the air as the show started. Airwolf was the helicopter version of Knight Rider – if only Kit could fly ...

Then there was Sledge Hammer. A spoof of detective shows of the mid-80’s (think Naked Gun). I remember sitting and laughing at how preposterous the episode themes were. Sledge Hammer barely had two seasons in the limelight – but it will live in my memory forever. Where are you now David Rasche?

Hill Street Blues, probably one of the most beloved theme songs of all time.

Hunter – starring ex-NFL player Fred Dryer as Sgt. Rick Hunter and Stepfanie Kramer as Sgt. Dee Dee McCall. I loved that Dee Dee constantly had to play dress-up (usually as a prostitute or stripper) to lure in suspects. Lots of 80’s spandex, glitter and big hair!

And now for my claim to fame. According to my “Mommy Dearest”, before I could even speak, the first noticeable form of communication from me was a song I hummed. The theme song to... wait for it... Dallas. Maybe I’m destined to marry an oil baron after all.


Here are a few more nods on my trip down theme song memory lane, starting with a few of the more obscure:

Tales of the Golden Monkey

And for my mini-series nods...

and North and South

Posted by MrJeffery at 1:37 PM