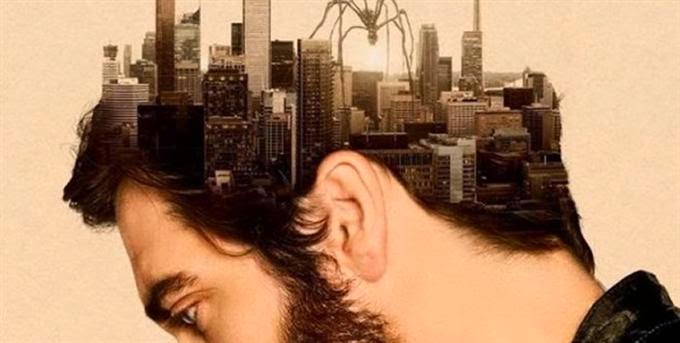 I'm not a fan of spiders, especially seeing one onscreen in a dark movie house. The opening scene of Enemy has one, so immediately I was checking around my feet and felt ill at ease. With his past two films, Prisoners and Incendies, and now the nightmarish Enemy, Denis Villeneuve is a bit of a spidery filmmaker: his movies are taut, but fragile webs, seriously constructed and meticulously shot, with plot elements moving in unexpected, but intricately designed directions.  Some complained about the ridiculousness of Prisoners, but I was all for it: its near-camp elements, all the weird, uninvited rooms the movie moved in and the mood Roger Deakins' stunning photography set. Despite their brooding nature, Villeneuve's pictures are sometimes darkly funny. Prisoners threw digs at American flaws and noir trope and Enemy has a sort of jokey, absurdist conclusion while also playing with the enigma that is Jake Gyllenhaal. In Enemy, when Gyllenhaal's scruffy, disheveled, and flavorless professor, teaching the same class over and over, sets the plot in motion after googling his bit actor doppelganger, we get a smiling shot of him circa early 2000s, when he seemed a little more quaint, doe-eyed and adorable and less brusque, forlorn and twisty as his persona seems to be now.  This is a perfect role for Jake, who is also the centerpiece of some other ambivalent, memorably chaotic (?) films: Prisoners, Zodiac and Donnie Darko.  In all of these films, I think he finds the right balance to be a strong, human element without overpowering the movies' overt stylishness. Enemy is nicely crafted with editing by Matthew Hannam and yellowish-tinted photography by Nicolas Bolduc, playing with scale and point-of-view to keep things tense and uneasy. The glow of the film is very sleepy and warm, but the images we get are cold, unsettled and bleak: Toronto, framed by Bolduc, looks so eerie, mechanical, surfacey, isolated and soulless, with all those giant, well-protected glass towers (mimicked in the the sleek tiles of a backsplash in a condo kitchen) and emptyish streets, similar to the way Spike Jonze's near-future L.A. in Her.  It's a weird relief when the film makes a quick jaunt out of the city to an old hotel (there were at least 2 2's in that room number). Also of note is the striking score--a big, lumbering dirge by Daniel Bensi and Saunder Jurriaans. Enemy is adapted from the José Saramago novel The Double. Just a quick glance at the book's plot offers some details that are cut from Villeneuve's version (couldn't Isabella Rossellini -- who serves up an odd, coy single scene -- been given more to do?).  Even though Denis claims it's a solvable puzzle, the opaqueness of Enemy (message boards are already piling up with sloppy theories) ultimately doesn't do the movie much favors despite its exquisite direction and aesthetics. ***