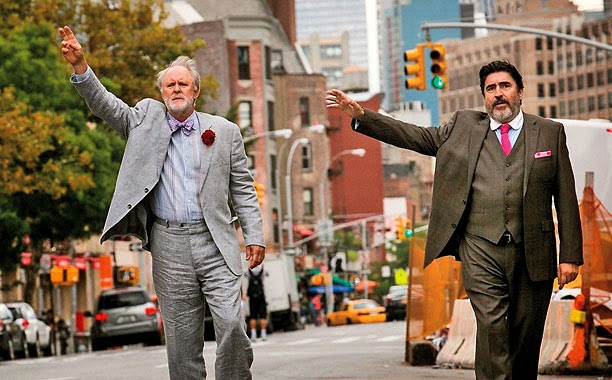 Many New York movies that strive for a sense of realism are forced to be caught up in the doldrums of real estate (see Frances Ha and Please Give). Ira Sachs' (Keep the Lights On) new film Love Is Strange, a tender-hearted but also deep film about longtime gay couple--painter Ben (John Lithgow) and music teacher George (Alfred Molina)--is about housing just as much as it is about relationships. In fact, Ben and George spend most of the movie apart, couch-surfing. The bumbling awkwardness of being a temporary guest is something Sachs and his gifted ensemble, including a sharply-tuned, subtle Marisa Tomei as a novelist, portray quite well. The movie smartly skims over or skips the big events, something that could turn off some viewers, in its sensitive, compassionate character sketching. Chopin is heavy and gorgeous on the soundtrack and the movie has the interpersonal irritants, dryness and slow pulse of Romer movies (see A Tale of Springtime) or a vintage Woody Allen drama (see Another Woman). Lithgow and Molina are always intriguing but not really my cup of tea actors, sometimes prone to overacting, but they are marvelously subdued here and perfectly cast (by incomparable Avy Kaufman), believable and well-drawn. I wondered if some of the stories of the surrounding characters were unfulfilled to enhance the on-your-own mentality we sometimes have towards the elderly (see the McCarey classic 30s weepie Make Way for Tomorrow, a film that this one owes a lot to) or if they had to be cut down for pacing issues (the movie, like Sachs' Keep the Lights On and Linklater's Boyhood, is somewhat shaggy). I ended up having a personal emotional reaction to the film as it slow-danced towards its magic hour denouement--the Nina Simone Julius Bar scene and the painterly shot of Waverly Diner neon (the wonderful cinematography is by Christos Voudouris, who also lensed the golden Before Midnight)--broke me down as it felt so wistful and it hit so close to home. ****