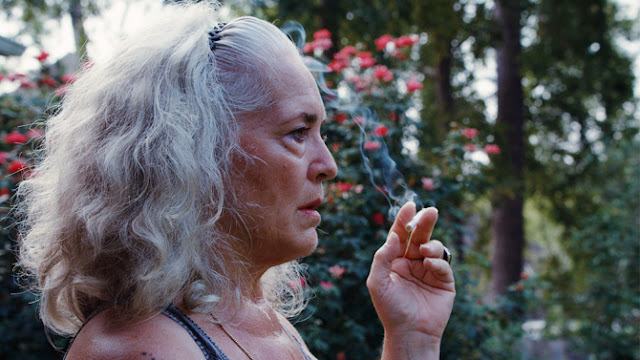 The turbulent return of the black sheep at a family gathering has been subject matter many times in cinema, the best of which in recent memory is Jonathan Demme's Rachel Getting Married. In Krisha, a solid debut feature from Trey Edward Shults, the title character (acted with ferocious vigor by Krisha Fairchild) is our unreliable narrator and misfit guest at Thanksgiving--awkward and desperate to make a connection with her family members, specifically her son (played by Shults), in the aftermath (perhaps still midst) of drug and alcohol addiction. As in Rachel, the past clings to the occasion, and it unfurls in the psyche of its damaged soul with plucky, dissonant string cues (here by Brian McOmber). And as the film builds to its unsettling thunderstorm of a finale, the frame slowly closes in on Krisha, with her powerful, wounded eyes, aged face and beautiful gray mane. A cigarette always near the lips, Krisha Fairchild delivers a richly-detailed, dynamite portrayal; despite the use of her name supposedly she isn't in real life like Krisha at all. Shults shot the film cheaply in his parents' Texas McMansion using family members as actors. He has a gift of juxtaposing everyday upper-middle class banality (boring manly sports talk, turkey prep, manicured lawns, kitchen counters and bathroom sinks) with highly-scaled cinematic effects. As Krisha's son, Shults shuffles around the house with fraternity airs in slippers, a bathrobe and a T-shirt. The gaggle of people in the house, including dark-humored brother-in-law (a crackling Bill Wise), makes Krisha uncomfortable and claustrophobic. The editing and photography and score lend to this with feverish abandon. Not until she swigs wine that the imagery slows down and the soundtrack goes flush with Nina Simone and things feel breezily at ease--at least for a little while. Like the film itself, its cinematic depiction of addiction is remarkably tactile. ***1/2

Posted by MrJeffery at 6:01 PM