if it bleeds, it leads

I am listening to Tommy Boyce and Bobby Hart's "I Wonder What She's Doing Tonight" to try to get into striking the right notes for this review; "I Wonder..." is a song with an ebullient sound that's wrapped up in longing is so sarcastically and dramatically placed in Antonio Campos' tart, upsetting, and completely engrossing Christine, the devastating chronicle of Christine Chubbuck who, in 1974, committed suicide on a live TV broadcast. For myself, the title of the film instantly conjures John Carpenter's movielization of Stephen King's killer Plymouth Fury horror show and yet the reference doesn't completely miss the mark as Campos' vision sometimes mirrors Carpenter, with elegant, moodily-lit compositions and a claustrophobic portrayal of a tormented outcast. The time period and subject matter also conjures Sidney Lumet and Paddy Chayefsky's 1976 biting news satire symphony masterpiece Network (Chayefsky claims to have started writing the film before Chubbuck's death). Though Christine is more internal and less extravagantly-realized. 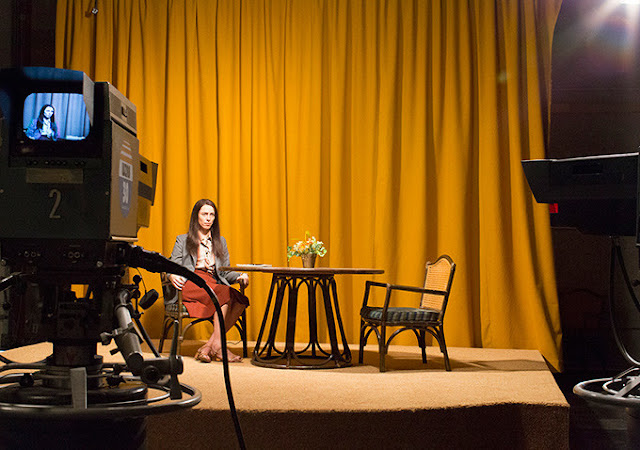 Rebecca Hall, with theatrics in her marrow--daughter of an opera singer and a famed theater director--is oft-forlorn, pale and tenderly expressive in her roles. She has winningly run through many parts in this early century of somewhat hapless, humanized misfits. As Chubbuck, a TV news reporter of lite-local Floridian stories who wants to move up in the ranks, she's obviously game to this larger-than-life role--a woman with an awkward gait thundering through green and mustard yellow-tinged early-70s decor, delivering emotionally sea-sawing monologues hardened by a Northeastern accent, as a virtual stampede through celluloid. And yet with Hall's knack for tenderness and subtle humor, it's impossible to say she overplays the part. Hall is completely possessed and the audience is wound-up within her psychosis. After my screening when she appeared onstage for an interview, polished and limber, with her soft British lilt and cute bob haircut, it was a breathtaking contrast, even for someone familiar with her work already. She is surrounded by a seasoned, affecting ensemble (mostly theater actors) including J. Smith-Cameron as her mother, whom she lives with, and Maria Dizzia as Christine's closest friend. It's heartbreaking watching these characters try their best to reach out to Christine, but who just can't quite connect. As a slightly arrogant colleague, Michael C. Hall plays a sort of love interest who takes her on a date to a group therapy session (a strong scene)--but it's unclear whether Christine is really in love with him or is just trying to create a story-line to "normalize" her life in the eyes of others. Even though the film is full of details and the many acutely constructed scenes of conflict, I appreciated the ambiguous nature of Craig Shilowich's script, which alludes to, rather than shows, another life Christine previously had in Boston. The sexism Christine faces and her cryptic intelligence are richly realized. In her puppet shows for hospitalized children, which would perhaps be sentimental and clunky in the hands of another actor, Hall is moving and terse in her simple reenactments of how to deal with a cruel world. 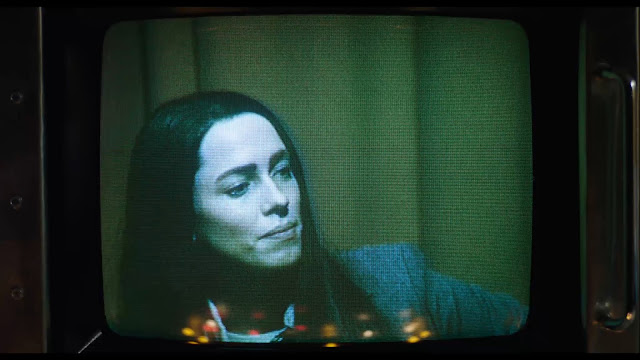 The irony of the AM radio soundtrack and homages (Karen Carpenter appears on Chubbuck's wall) runs deep and haunting throughout. Chubbuck herself was reportedly a Roberta Flack devotee and had her music played at her funeral. "You fill up my senses," Christine belts with John Denver on the radio of her VW bug--a happy glimmer until she stiffens up again in worry from her perceptions of a driver next to her. It's the best use of period music I've seen in a picture lately. And like the costuming by Emma Potter, it feels organic, of its time and of Christine's universe. Although the film can be blunt and exacerbating, especially seen through Chubbuck's eyes, we aren't bludgeoned with Nixonian references and yet we feel the cynicism, distress and confusion of the era: a move to more sensationalism in news coverage; the mistreatment of women in the workplace; a gun store owner pitched in unwarranted fear; all of this is still easy to relate to for Americans in some respects in a doozy of an election year. And while the film looms largely in the gloom of Christine's psychosis and desperation, Dizzia figures in a dark and moving coda with a fitting, plaintive sing-a-long to the "Mary Tyler Moore" theme. What is bliss in these slices of time and where can it be found? ***1/2

Posted by MrJeffery at 2:49 PM