the eyes of my mother

Wind through the trees. A farmhouse on a hill. Gray mist hanging over a barn. The black & white imagery is both stark and rich in Nicolas Pesce's debut film, The Eyes of My Mother, a horror folktale about a young woman who maims and chains victims in her barn after witnessing the murder of her mother. Her mother and father passed on a fascination with death, torture and the innards of human anatomy. 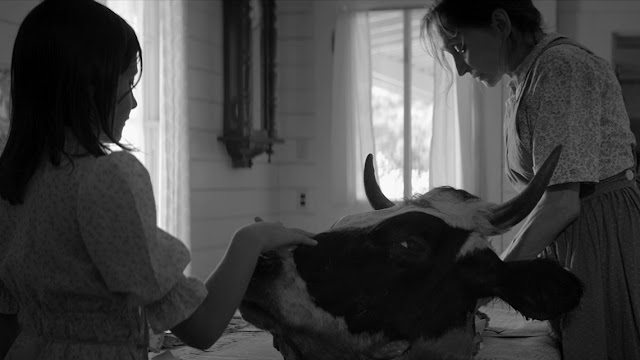 The Eyes of My Mother looms through years with little clues of what era it's in besides a glimpse of a Guess logo on blue jeans and an acid wash jacket. It's a pretty movie, almost cloyingly so. I guess the attempt is to marry gruesome imagery (and sound effects--like smacking on a mouse) with elegantly framed shots. The sound design is compelling as is the cinematography (by Zach Kuperstein) and Pesce's distinct cutting of the film. It's elliptical and quiet schlock gussied up with arty, Criterion flair, with scratchy turntable tunes and unnecessarily broken up into chapters (having seen this directly after Moonlight, which used a similar effect much more compellingly, made it seem even more trite). But there's both an airlessness to it and an air of pointlessness to it and the constant body horror, both alluded to and graphically shown, pushed my buttons too much. Some may counter, at least the film causes a reaction, especially in these times of disaffecting pics, though queasy carnage is an easy way to shock. Coupled with flat performances and a willful lack of camp or humor (which similarly- themed films like Psycho and 74's Texas Chainsaw bled so gracefully; or even the wondrous Motel Hell, which the vocal cordless screams conjured), the movie is a prettily filmed drag. There seems to be a few pretty indie horror movies of late with scant scripts that don't risk much aesthetically. At times I wish I could leave or sink into the Vincent Price movie on in the film's living room. This is not to say Pesce is a promising talent, especially as a director and editor--many moments are skillfully rendered and its chilly loneliness is palpable. But why can't schlock sometimes just be schlock instead of McDonald's served on fine china? **1/2