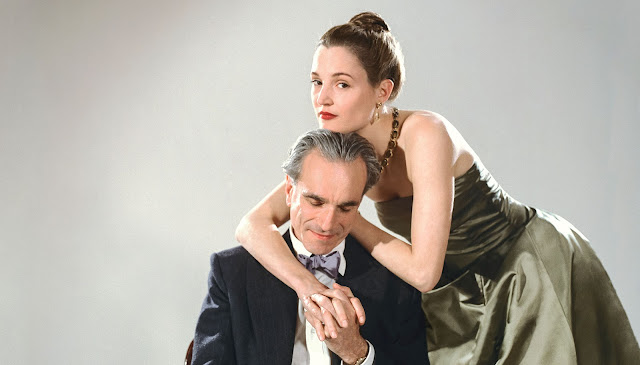 Phantom Thread is a film of deliberate constraint and simmering tension. Finely tuned by director / writer Paul Thomas Anderson, the picture is brittle and chilly to behold but warmed by Jonny Greenwood's ravishing film score and the humanistic flair of its riveting trio of players: Daniel Day-Lewis as fictional dressmaker Reynolds Woodcock (a humorously impossible name), his sister Cyril (Lesley Manville), and his lover, at least sort of lover, Alma (Vicky Krieps). Although there is a twisted, insidious nature to the power dynamics between them, the movie concentrates on Woodcock and Alma's budding romance with mischievous, quietly playful humor. 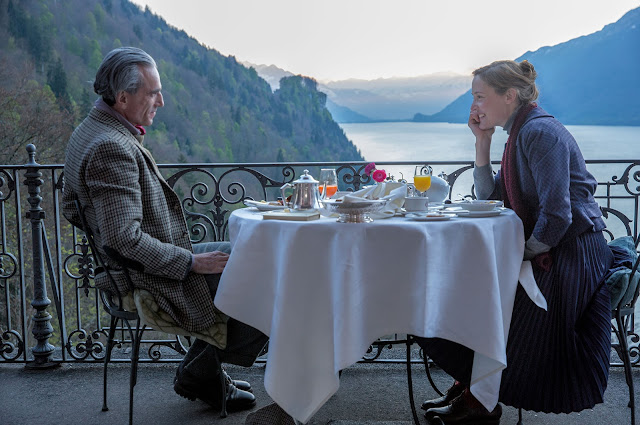 Fashion pictures are usually jubilant in their portrayal of raiments, but I don't see Woodcock's dresses as "beautiful." In fact, he delivers stodgy and suffocating-looking garments with drab, conservative coloring. Costume Designer Mark Bridges does terrific work here, showing the psychology of Woodcock through his clothing. One client is sloshed and unbalanced but also visibly uncomfortable in both the fitting of the dress and the dress itself (character actress Harriet Sansom Harris).  Woodcock, with his team of furtive, industrious seamstresses below him, proclaims he's making something beautiful; he is more obsessed with his art than customer feelings. Alma's excoriation of this particular woman in defense of Woodcock boosts their cinematically unorthodox romance and also scores points of approval from the judgy Cyril. In line with his firey monologue railing against the term "chic," Woodcock is not the visionary he may think he is but instead a no-nonsense workman, acting out frustrations through the creepy control of his creations. 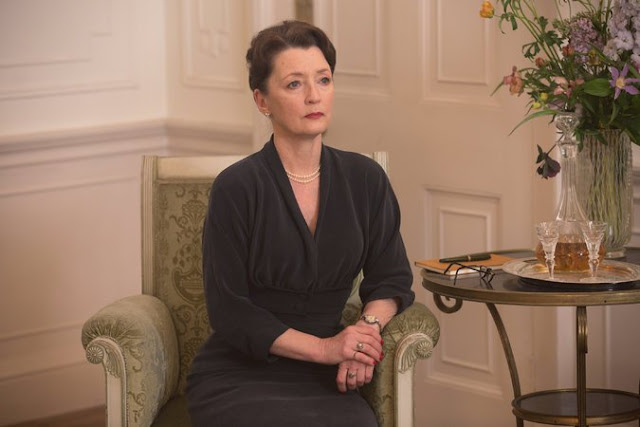 Anderson's film shares touchstones with Hitchcock (Vertigo and Rebecca came to mind) and like Hitchcock's work, Anderson's film is entrenched with anxieties of women. Woodcock is the  dominant male of the picture (Daniel Day-Lewis' eerie turn helps cement this) with his many commands and voiced irritations but he can only function through women: his benefactor, his clients, his workers, his sister, and the persistent haunting memories of his mother (a ghost scene in the movie is particularly great). And he's not just a shouty dictator--he's sort of milquetoast and vulnerable--without Cyril and without Alma, I'm not sure he would survive. What makes the film work on another level are the performances of Vicky Krieps and Manville, who act with quiet, razor-sharp exactitude. Cyril is a fascinating one in particular--a classic supporting character and one who Manville keeps from being an old-fashioned spinster trope. It's hard to believe it's the same actress at the sad, withering heart of Mike Leigh's Another Year; Manville can crush the screen with eye movements (like in the closing of Leigh's film--which is an excruciating emotional blow). 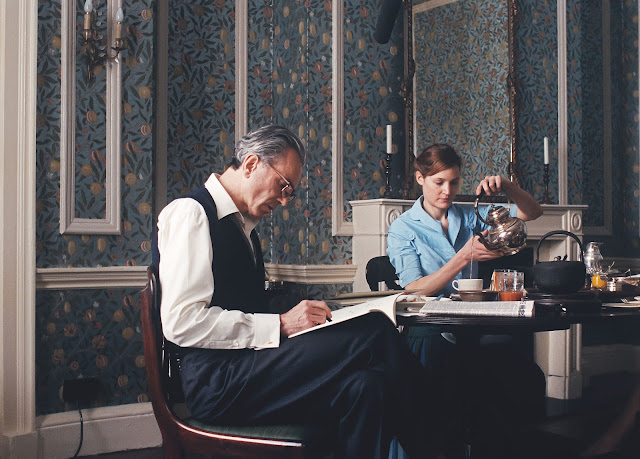 Greenwood's score is another strong element of Phantom Thread as it moves what could have been inert. The Radiohead guitarist has penned other Paul Thomas Anderson's pictures before with ambient moods and droning horns, some of which felt self-conscious and deliberately obscure, but this is fun, classically plinking pianos and swoony strings stuff--that hits notes and melody directions that are just slightly off-kilter. As the music plays over the credits, it leaves an indelible impression of the picture's unique, mesmerizing experience. **** Posted by MrJeffery at 8:29 AM