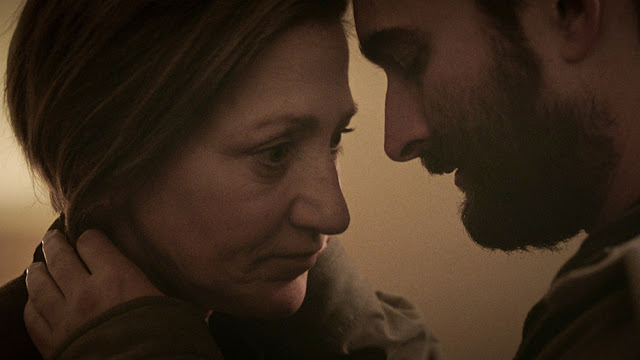 As evidenced in her previous work, but especially in the excellent Your Sister's Sister, Writer / Director Lynn Shelton has a delicate and deft handling of her cat's cradle of storylines and emotions. Her new film Outside In is perhaps her best piece since and also a good companion to Your Sister's Sister, with a sturdy cast adding subtle layers to intense but mellow-toned dramas. Jay Duplass, who co-wrote the picture, plays Chris, returning back home after twenty years behind bars to the glum, ever-overcast and drizzly Granite Falls, Washington. As his bike has been rusting in the garage, his cassette tapes and CD's stowed away, a lot has changed since he's been gone, most specifically the rise of smart phones. And yet there's a sense that much hasn't moved on. Shelton wisely refrains from immediately or clearly presenting details of why he was imprisoned and instead introduces Chris at an awkward, spoiled-"surprise" homecoming. It's there that we first glimpse Carol (a naturalistic Edie Falco), his former high school teacher, who has been a mentor over the years. These two become the ultimate force of the picture, a bond that has bloomed for Chris in his adulthood despite Carol's reticence. Carol's young daughter Hildy (Kaitlyn Dever) seems intrigued by Chris and they start to hang out. She shows him an abandoned burned-down house where she's been doing a sort of cat's cradle of her own--plastic ribbons in clean, symmetric design. In fact, we see these three characters in their own zones of loneliness: in Carol's stifled marriage, in Chris' attempts to enter society again (biking in his maroon hoodie, grazing for employment--a disposition that doesn't seem so far off from his former high school life), and Hildy's aloofness. I remember being captivated by Dever's performance in Short Term 12. She continues to be a compelling presence who makes against the grain choices. Most movie teenagers act the same around everyone, but realistically and interestingly, Dever shows subtle shades of differences in the way she presents herself to her mother and to Chris. The reverbed plucked string score by folk pop artist Andrew Bird balances out the tensions and emotions of the characters. I felt trapped with these people in a fog they can probably never shake off. Shelton's piece even ends with a rainy soundscape over the end credits--a fitting way for the film to both rest and linger. ***