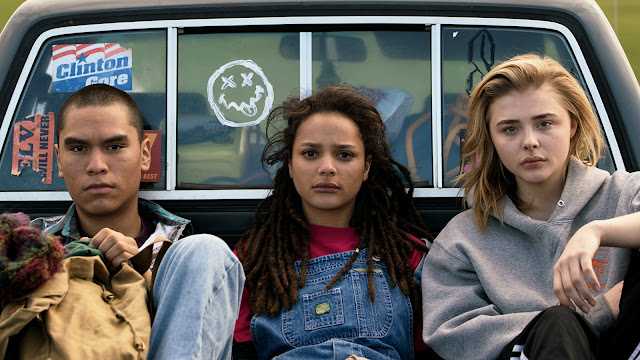 We are introduced to Cameron Post (Chloë Grace Moretz) as a teen in a Christian school in a secret relationship with her classmate Coley (Quinn Shephard, who has shown great promise as an actress and director with her film Blame). When the two are caught making out in the back of a car on prom night, Cameron is taken to God's Promise, a gay conversion center, hidden in the woods. In these opening scenes, director Desiree Akhavan (Appropriate Behavior) establishes her film as tender and rueful. John Gallagher Jr. (of the similarly toned Short Term 12) as the mustached, "successfully converted" Reverend Rick, Cameron's mistfit cohorts--sharp-humored ex-commune teen Jane Fonda (American Honey's Sasha Lane) and deadpan Adam Red Eagle (Forrest Goodluck)--and the rest of the teen group, are all sharply defined, harboring a purveying sense of loneliness in their physically close quarters. But once I saw Jennifer Ehle enter the picture as "Dr." Lydia Marsh, the master of God's Promise, I felt the electricity of the set-up. Lydia could have been another savagely strict, monstrous Doubt / Cuckoo's Nest-archetype but the skilled Ehle plays her without exaggeration and with deep control. Once in a while, there is something searching in her eyes, as if she is regretting the pain she's inflicting upon her "disciples." Like most zealots, Lydia is a character who seems aware of the character she's playing, who grips icily to her power within her sham existence. It makes her manipulation all the more acidic. Set in 1993, the movie has a nostalgic softness for cassette tape thievery and letter writing. The film is adapted from a sliver within the epic YA tome by Emily Danforth and has a real sense of the teendom of the times, with a humorously wry edge. I felt the movie dissapate a bit in the latter half with a heavily weighted tragedy. More subtedly would have made a searing impact. But it's a quibble in such a well-wrought, moving tale, strongly directed and well-acted by its likable cast. ***1/2

Posted by MrJeffery at 8:00 AM