now that the stardust has settled 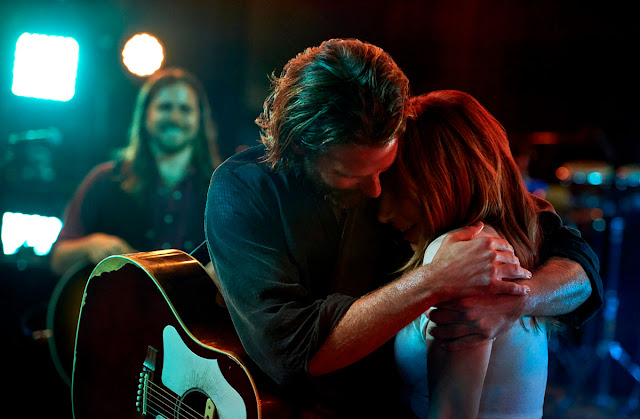 Bradley Cooper's directorial debut A Star is Born is tethered to a long history of iconography of the Warner Brothers versions that came before in 1937, 1954, and 1976. The newest version's title card is gorgeous, Cinemascope-era crimson with the alleyway echoes of Lady Gaga, startingly magnetic in her major film debut, singing a riff of "Over the Rainbow" with Garland-like vocal affectations. So begins an Oz journey, from taking out the garbage to becoming a star. It's risky to bathe in cliche--apt to draw comparisons and contrasts to what's become before--and yet there's solace in the familiarity that the movie rides on--from its predecessors and within the rags to riches to rehab VH1 tales so intrinsic in the fabric of showbiz.

On the heels of critical acclaim and festival ovations, Cooper's Star landed in theaters on an acutely contentious weekend in America. On "The Late Show with Stephen Colbert", Lady Gaga eloquently expressed  her thoughts: "I believe that I have seen is that when this woman saw that Judge Kavanaugh was going to be possibly put in the highest position of power in the judicial system of this country, she was triggered, and that box opened. And when that box opened, she was brave enough to share it with the world to protect this country."

I recently listened to an interview of Peter Biskind on Bill Ackerman's Supporting Players podcast--Biskind mentioned how movies can veer in different political directions, and how they can also be "centrist." Perhaps because it's so recent in the mind but I immediately thought of this incantation of
A Star is Born, whether strategically or not, as centrist--bridging between red state droning country rock of Jackson Maine (Cooper) and Gaga's Ally, who first meets Jackson in the drag bar where she performs ("La vie en rose," no less, complete with artificial eyebrows). The movie bridges itself  between economically viable and artistic and authentic; as commercial popular entertainment (cemented by an A Cinemascore) and the critics who fell for it who may otherwise think their tastes as more discerning.

As a movie fueled and balanced by both romantic dramedy tropes and gritty realism, it's not particularly expensive-looking, never dazzling with effects or sets. Matthew Libatique's photography is elegant but the fame that Ally witnesses and rises to isn't so seductive. Outside of the arena rock concerts, the rooms and spaces in the movie are often confining and cluttered. Hotel rooms and bedrooms, even the notoriously small SNL stage. In that respect, I like and admire how insular the main relationship is portrayed and also how distant this Star feels--from the crowds (just cheering, anonymous masses). 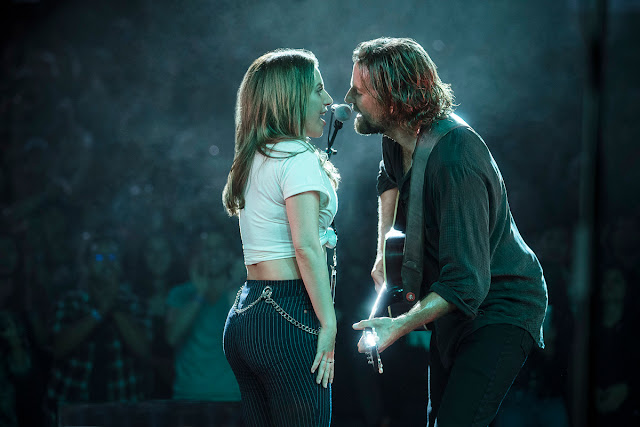 To perhaps cut through drabness, the music is very, very loud--as it preps us in the throttle of  opening number "Black Eyes"--and sort of appropriately middling, except for "Shallow" which hits early-on with chilling intensity. The stagecraft of the piece is joyful and unnerving, with Jackson's unique physicality--side glances and turned back--Ally in the background until she ultimately soars into control. Like other enduring movie pop songs, it was bliss I wanted to rewind. The musical moments of the movie--and perhaps the characters' own joys--never hit that peak again. The finale strains for tears with a treacly tune of soft piano chords distracting in its closeness to Mariah's cover of "Without You." But that song, like so many in the movie, is salvaged by excellent acting. 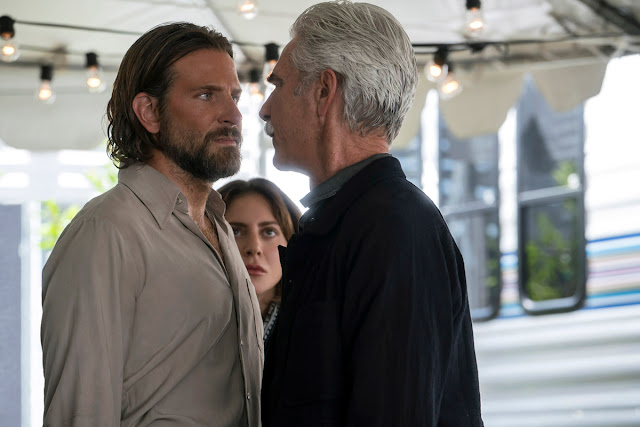 Time and again, the actors transcend the occasionally cheesy trappings of the script, penned by Cooper, Eric Roth, and Will Fetters, including a fictional Grammy Awards ceremony (real and fictional entertainment award ceremonies, like the one in The Bodyguard, are a bit cringe for me, but also deliriously entertaining). There, a drunken Jackson is slotted in backing guitar for a Roy Orbison tribute (which is exactly something the Grammys would do) as a younger crooner is shifted to center stage. Cooper plays it all so well, that you feel in the moment of the scenes, even if the scenes are so on-the-nose in their set-ups. The script doesn't offer much insight into addiction or relationships but Sam Elliott as Jackson's older brother and Andrew Dice Clay as Ally's sweetly concerned / badabing-ish father, are seasoned and perfectly cast. Elliott in particular sharpens Jackson's background story and injects it with emotion. The actuality of Jackson's persona--as raw and real as it may come off to his fans--as imitation, is one of the strongest hooks of the movie (and in Cooper's
performance). We've seen many a pop star fall on their face in a film role, so this movie benefits greatly from Gaga's charismatic turn. It's a sensitive and winning work. 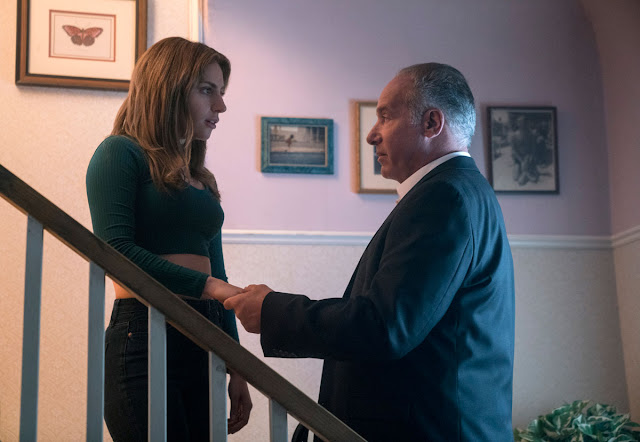 It's been some time since we've had such a galvanizing Hollywood tragic love story. Maybe this would have slipped away in another era, but each of these versions were event movies in their day for their own compelling reasons; in this time, I'm glad it's here. ***1/2

Posted by MrJeffery at 8:36 PM