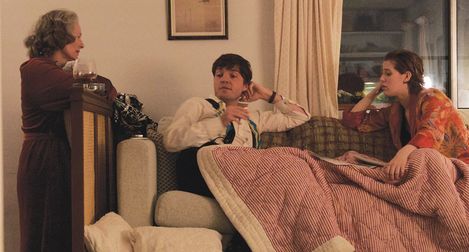 There's an on-the-nose moment in Joanna Hogg's The Souvenir where the protagonist graduate film student Julie (Honor Swinton Bryne) dissects the fragmented nature of Hitchcock's shower sequence and the lingering shot of Janet Leigh's body afterwards. The Souvenir, a hazy account of Julie's new studies in film interlaced with her relationship with a troubled gent Anthony (Tom Burke), is fragmented in of itself. The film chooses to withhold information and takes visual and sonic leaps: shots of Christmasy London, with strewn lights twinkling and Chrissie Hynde's plantive vocal wailing away on The Pretenders' "2,000 Miles," suddenly cut-off. "Sometimes in a dream / you appear," is one of the lyrics to that song--apt to Hogg's film, which feels like pieces of memory stitched together, often in closed interiors (Julie's apartment, the tight bedroom--with its amusingly drawn line between the couple in bed, the film studies warehouse, the editing rooms, a railway car). When the film chooses to breathe outside--we see two memorable shots in particular--a line of trees and high, grayish blue sky (a visual motif) and the bucolic, rambling fields of a country estate. The muted, pastel-ish palette of Jean-Honoré Fragonard's titular painting, which is referenced directly in the picture, is integral in Julie's posh, hushed settings. 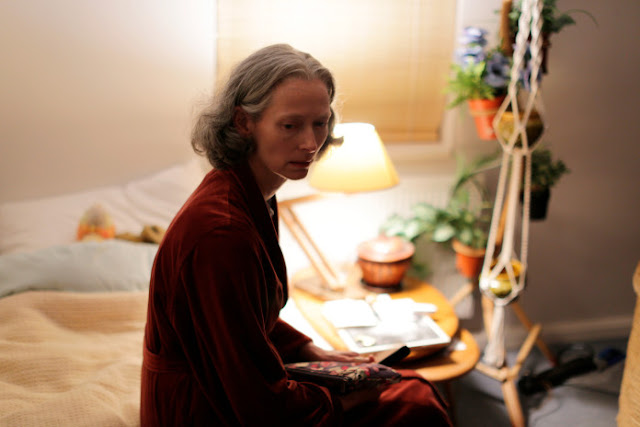 Though the aloofness, the fuzziness, the slow pace, the repetitious nature and the frustrating aspects of Julie and Anthony's relationship can be trying, it's undeniable that Hogg has crafted a finely-tuned, dreamy story of a woman from privileged means coming into her own. As a counterpoint, Julie's mother Rosalind (the always distinctive Tilda Swinton) in her pristine, perfectly costumed get-ups (breakout work by Grace Snell) seems similarly stifled and inexpressive--watch her try to voice her concerns in a dinner scene, and you feel all the build-up of her character's thoughts trying to be set free--it's a fantastic moment. Julie seems to be trying to carve out a different path for herself and later, Rosalind seems inspired by Julie to place some of her energies elsewhere as well. Even though Rosalind is a small character in theory and Anthony is a much bigger, parading prescence, I ultimately felt that the story emerged most effectively as a mother and daughter tale--what they hide and reveal to one another and what is understood. ***1/2