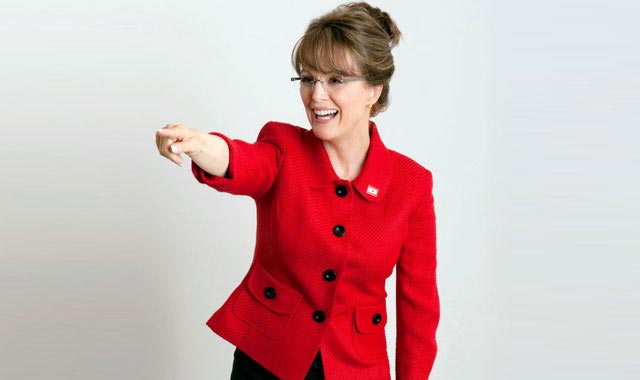 Game Change is one of the flippin' scariest films of the year.  It's based upon Mark Halperin and John Heilemann's bestseller about the riveting and epic 2008 election of Barack Obama.  But it's only a sliver of that account (which had many fascinating and sad things to say about John Edwards), focusing instead upon Sarah Palin (Julianne Moore in her finest performance in some time).  Even though the movie tries to make you root for Palin in certain scenes (inspiring music swells during her nasty convention speech which the media largely, and inexplicably, praised), it's quite frightening to see how little she knew about world history and current affairs while in the race.  Yet even more inept and destructive is John McCain's staff, spearheaded by Steve Schmidt (Woody Harrelson), who chose Palin for the ticket without vetting her properly or testing her knowledge.  Directed by Jay Roach who did HBO's Recount, the film is a patchwork of high-intensity scenes and moves quickly like a disaster picture with Palin simultaneously destroying and reviving McCain's contemptible campaign (those racist rallies are difficult to watch again).  John McCain (Ed Harris) comes off as more of a softie as he did in the book and as he does in real life.  Showing a lack of control over matters, he's incredibly aloof from the campaign and the drama concering Palin.  Sarah Paulson is excellent as former Bush communications chief Nicolle Wallace (read her somewhat terse response to the film here), especially in the scenes where she laments her Election Day choice and when she tries to prep Palin for the disastrous, but illuminating Katie Couric interview.  But this is Moore's film.  Playing such a recognizable character satirized already with such brilliance by Tina Fey must have been no easy task.  Not to mention that I would never think of Moore playing Palin, but she disappears here, and the result is both subtle, vulnerable and terrifying.  Roach's direction is pretty derivative (I cringed at the use of Shania Twain's "Up") and I'm not really sure what the point of the movie is but it's quite entertaining and well-captured.
Posted by MrJeffery at 7:26 PM