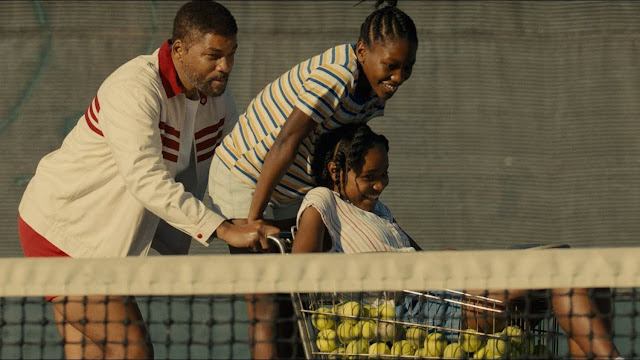 The traditional biopic has become a stale genre--especially with the sophistication and ubiquity of documentaries--so filmmakers and screenwriters seem to be finding new angles to tell stories of real people. In King Richard, we watch the rise of Venus and Serena Williams as young women through the lens of their father (Will Smith). Richard Williams is a character: Louisiana-bred with an eccentric personality. He's tough, and a disciplinarian entrenched in molding his two daughters (Demi Singleton and Saniyya Sidney, both excellent despite the slim material to work with) into professional tennis players. His wife, Brandy (Aunjanue Ellis) works a a nurse, and is usually exasperated with Richard, throwing her hands up in the air, but also loving, and when she feels she needs to speak her mind to him, she does (as in a strong scene where he drops off their young daughters at a mini mart to teach them a lesson about humility and drives off, much to Brandy's dismay). Those little moments between the family like when Richard makes them watch Cinderella, quizzing them on what they have learned, are the funnier and poignant parts of the movie, and Smith shines in his low-key performance (much more low-key and natural, in a good way, than I expected given the physical transformation and styling, the emotionally-manipulative editing of the movie's trailer and the heated hype surrounding his Oscar prospects). The supporting cast does nice work too--Ellis never feels like she's giving a performance, she is just so naturally present. And Tony Goldwyn and Jon Bernthal (who gave a completely different turn in this year's The Many Saints of Newark) are both effective as Williams' influential coaches. Set in early 90s Compton, the film has the feel of the times in costumes and vibe--the CNN broadcast of Rodney King's beating on the TV set ("at least they got them on tape this time," Brandy remarks) juxtaposed with a scene of Nancy Reagan promoting her "Just Say No" campaign. The film is shot by Robert Elswit, and it has his signature polished look (the greenery and those neon tennis balls really pop). 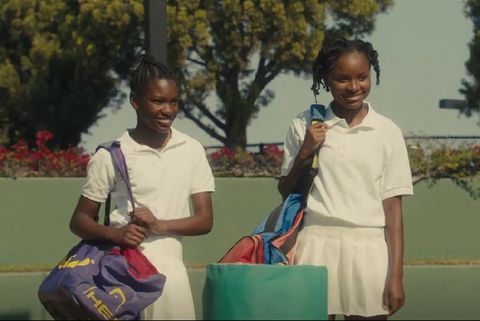 The only problem is that the movie, directed by Reinaldo Marcus Green, is unfortunately, fairly dull and somewhat inert, with few moments of dramatic conflict, or much driving urgency. It does nail its ending though, with an effectively-wrought final match and a rousing Beyoncé track (Couldn't wipe this black off if I tried, she sings fervently, That's why I lift my head with pride) over the credits with the obligatory real-people-footage. For those who want a story that focuses more on the lives and emotions of the young Williams sisters, you probably won't get much here, as this is more Richard's story, but this film is ultimately a quaint family picture of unwavering, dogged perseverance. **1/2

Posted by MrJeffery at 8:52 AM