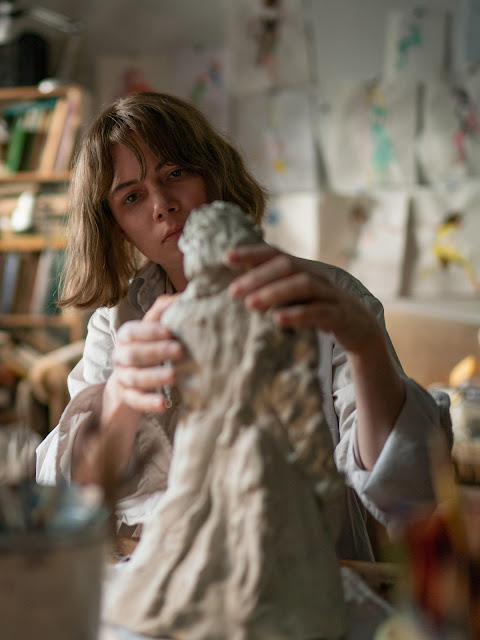 The art of characters making something is an interesting through line with the films I've seen over the past few days at the New York Film Festival. In Tár, a woman cannily creates a public illusion of professionalism and meticulousness; in The Dam, we watch men make bricks, with one character also mounting a surreal, pyramid-like statue of mud. In Kelly Reichardt's sweet and unassuming Showing Up, the craft of making something is more overt, with Lizzy (Michelle Williams) making ceramic sculptures in her Portland duplex. The sculptures, one in particular of a woman with an arm outstretched as if in dance, are in contrast with Lizzy, who is cranky and physically inexpressive--her frustrations bottled-up--walking awkwardly in Crocs. If her physicality is expressive, it's expressing rampant dissatisfaction through a pinched frown. Her landlord and duplex neighbor, Jo (Hong Chau), also wears baggy clothes (amazing flared jeans) with Crocs. But she's living seemingly in a more hazy bliss (the hard work she does of her own art is done mainly behind closed doors) and is more freewheeling--as evidenced by her first appearance of tumbling a tire to fashion a tire swing. Lizzy wants her hot water fixed, and Jo shrugs it off whenever it's mentioned. It's suggested in the movie that the two once went to art school together, and that Jo's career, is perhaps, sort of ahead of Lizzy's. The two actresses end up creating delightful contrast onscreen. Adding to Lizzy's tension as she readies her show, is working an office job at an art school for her quietly judgmental mother (a wonderfully natural Maryann Plunkett), her father (the always quality presence of Judd Hirsch)--a former ceramics artist himself--and her troubled brother (John Magaro, who starred in Reichart's critically-celebrated First Cow). 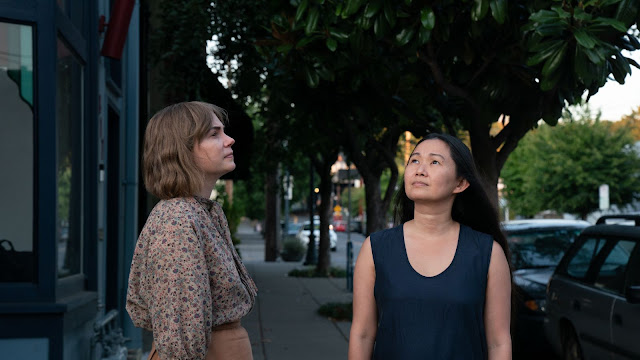 The banality of making art that isn't widely celebrated or known, is something extraordinarily rare in film, at least from what I've seen. Reichardt's sensitive portrait shows how the making of art affects the artist--it's a movie about the ticking of time (we see it flash on the stove and elsewhere throughout) and the days turning into night, and all the things that need to be done and all of the unexpected things that can go wrong. One of those symbols that flies through the movie is a wounded pigeon with a broken wing. Lizzy and Jo attempt to nurse it back to health. It could have been symbolically trite and heavy-handed, but Reichardt's movie and the excellent cast--including André Benjamin (his drifty flute-playing on the film's score ending up as pigeon paean) as a free-spirit kiln worker and Amanda Plummer as kooky traveler and couch surfer--imbues the film with tenderness, a light touch, and a sense of the lackadaisical. Reichardt seems to know this universe well. In addition to the fictional set-ups, there are also scenes of art-making, including in during the main titles, at the now defunct Oregon College of Art. All of this is treated with sincerity, simplicity and reverence, making this one of the more quietly inspiring movies of the year so far. ***1/2

Posted by MrJeffery at 3:29 PM