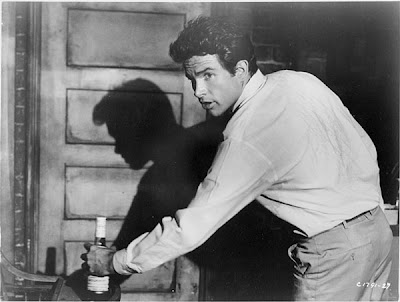 A gorgeous Warren Beatty (in his third film role) makes an impact as the angsty drifter Berry-Berry in John Frankenheimer's 1962 melodrama All Fall Down.

Even though Berry-Berry lives far away in Florida--working odd jobs and abusing women--his younger brother Clinton (Brandon DeWilde), eccentric, alcoholic father (Karl Malden) and overbearing mother (Angela Lansbury) idolize him with a myth-like status. Berry-Berry's name suggests a chronic disease and indeed he poisons everyone around him. Once he comes back home, he quickly falls hard for the widowed and damaged Echo O'Brien (Eva Marie Saint) whom Clinton also lusts after.

) inject a lot of unique visual flair into a film that sometimes feels stagy. It's well-cast. Besides being populated with unique bit players, all of the principals shine. Lansbury overplays things a dash and disappears into her role. Malden is well-suited as the kooky (and Communist) father. Eva Marie Saint is lovely and sufficiently tragic. And the too-beautiful Beatty is both charming and callously offensive. But the heart of the picture is Brandon De Wilde. What a terrific, handsome young actor (also so wonderful in Hud

) who tragically died too young. He pretty much outplays the pros as the isolated, adoring high school dropout who habitually writes down all the conversations around him and eventually grows up. Picnic

) is a little too quirky and melodramatic and things don't really pan out in a dramatic or satisfying finish. But the film is still well-acted and nice to look at. ***

-Jeffery Berg
Posted by MrJeffery at 7:23 AM