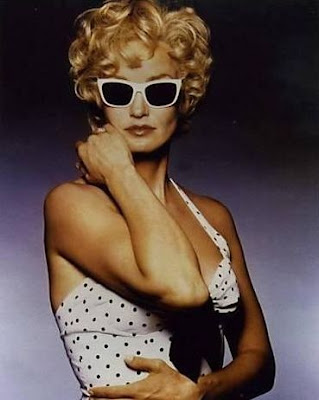 In the wake of the BP oil disaster, Tony Richardson's (the Tom Jones

does have a certain poignancy today. When late 1950s military housewife Carly Marshall (Jessica Lange's Oscar-winning performance) visits a family near a bomb testing site to warn them, they tell her that they've been assured by the military that everything is safe.

Unfortunately the film is weakened by a lack of plot development and a curious flatness. Most of the story is about the rocky relationship between the unbridled Carly and her straight arrow General husband Henry (Tommy Lee Jones) once they move to a base in Alabama. They bicker and have wild fights, mostly caused by Carly's extreme emotions. Their two surprisingly even-keeled daughters endure the drama of their parents until one of them catches Carly sleeping with Henry's boss, Col. Johnson (Powers Boothe). In an attempt to separate the couple, Johnson dispatches Henry to a remote weapons testing site dubbed "Blue Sky." More drama ensues and Carly suddenly feels impassioned enough about her husband to take matters in her own hands.

Most of the film's strength comes from the performances. Lange, oftentimes going in unpredictable directions, gives us a brassy, larger-than-life heroine in an old fashioned turn that recalls the best of Elizabeth Taylor (one of Carly's idols). She is well-matched by Tommy Lee Jones, who gives a performance that's quiet and studied (just watch the way he asks Johnson to "come here" in a fist fight). The daughters too are perfectly cast and winning, especially an excellent Amy Locane.

The film unfortunately doesn't quite come together. Carly's attempts to thwart "Blue Sky" are too far-fetched to have emotional resonance. At the end, it strives for closure but we are back to where we started, with a seemingly happy matriarch just donning a new hair color. **1/2