essential 90s - the silence of the lambs 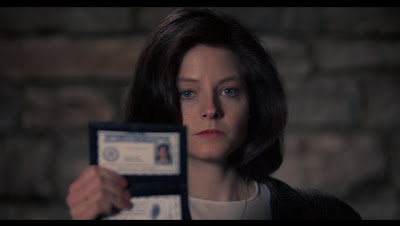 It's Oscar weekend, so it seems timely to revisit one of the Academy's most unique Best Picture choices: Jonathan Demme's The Silence of the Lambs. Even after many uses of its famous scenes in montages, clips, and parodies, the film remains tense and frightening--vividly filmed by cinematographer Tak Fujimoto and performed, especially by Oscar-winning leads Jodie Foster and Anthony Hopkins. Demme and Fujimoto's use of close-ups, framing, and the piercing, direct glares from characters--a motif in many of Demme's pictures--establish emotion, fear, and dread. The plot is intrinsically gory: with the help of cannibalistic killer Dr. Hannibal Lecter (Hopkins), rookie FBI agent Clarice Starling (Foster) is pursing a serial killer dubbed Jame "Buffalo Bill" Gumb (Ted Levine) who skins his victims. Yet much of the horror is suggestive or embedded within the dialogue of Ted Tally's script--a terse, sometimes coy adaptation of Thomas Harris. 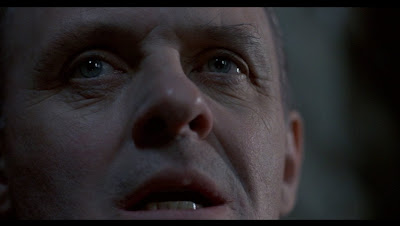 One of the best aspects of Jonathan Demme's repertoire is his thought-provoking, sometimes brutal, but always compassionate depictions of American life. His films are risky, very American, and often about difficult subject matter. Philadelphia

was one of the first and few mainstream Hollywood films about AIDS in America. Based upon Toni Morrison's lyrical, seemingly un-filmable novel, the underrated Beloved

dealt with the physiological, psychological and spiritual effects of slavery. And Rachel Getting Married

, shot in cinema verite style, overturned all notions of the traditional "wedding chick flick" by zeroing in on the isolated, damaged young sister of the bride in a distinctly Northeastern, upper-class bohemian family. I agree that these films, and others such as Something Wild

, and even his finest Silence, are sometimes a bit rough-around-the-edges, but they are winningly so. His audacious, slickly entertaining remake of The Manchurian Candidate

, released on the eve of Bush's re-election, never really got the credit it deserved. Often I appreciate Demme's vision and unique approach to subject matter. 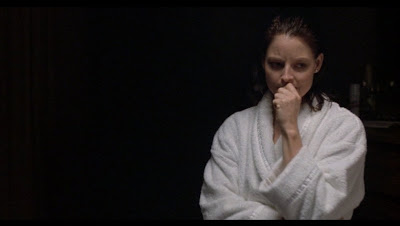 The Silence of the Lambs

still, twenty years later, remains one of the best horror films and thrillers. I wonder why no other crime thriller like it has utilized its best aspects more or why Demme doesn't seem to be mentioned or imitated as much as he should. Paul Thomas Anderson has said Boogie Nights

owed much to Demme. Even though Boogie Nights

, Clarice Starling, emotionally embodied by Foster, is a strong and fully-realized character. The film is deeply invested in her and her backstory. The film's title recalls one of Starling's most horrific memories. Deviating from thriller and horror scores, Howard Shore's lush, operatic music

The film falters a bit in some points. Plot mechanics such as the antics of Starling's emerging rival Dr. Chilton, performed by an overly theatrical Anthony Heal, and the realization that Bill's latest kidnapped victim, hauntingly played by Brooke Smith, is a Senator's daughter are necessary wheels to keep the story going but are tonally off. Yet the proceedings between Foster and Hopkins are so riveting, weak spots are barely noticeable. I had never really noticed Scott Glenn's quiet support as FBI mentor Jack Crawford, though he drew me in on this recent viewing. I was moved by his support of Starling at the film's end. 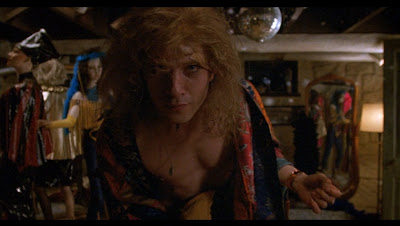 I can see why The Silence of the Lambs

was controversial at the time, and still, for its negative depictions of sexual identity. Though I am not in the camp who objects to the characterization. Ted Levine's performance--with his deep, rolling voice, broad movements--is creepy and sometimes, with great faith in all involved, unintentionally offensive (trans, gender ambiguity as shameful, deviant and menacing). There's complexity to Gumb and his appearance that offsets what could have been strictly caricature. One of the most horrifying scenes takes place when he kidnaps Smith. Donning a fake cast and pretending to be unable to move furniture into the back of his van, he lures her into capture. He's so great at small physical details (and Demme so adept with visual details--that close-up of that size 14 label is forever emblazoned in my mind) that the scene is tremendously frightening. 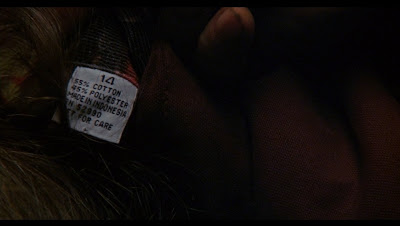 There are so many great film making choices on display: brilliantly realized scenes such as the now iconic first meeting between Foster and Hopkins, Lecter's escape, the wonderfully orchestrated house "mix-up"--an amazing use of parallel editing, the almost unbearably tense "night vision" showdown, and the eerie closing credits--one of my favorite endings ever. Mostly filmed in Pittsburgh, the use of locations are chilling and authentic--the fog, those dark, passing trees. The set designs are a marvel such as Lecter's plexi-glass cell and Gumb's labyrinth-like basement. There are also many ironic details which suggest the violence America is founded on (a Native American lawn decoration outside a victim's home, American flags subtly placed in the most horrific set pieces). Interestingly enough, the film was released in February during the Gulf War. Demme's just-right soundtrack choices (the memorable use of Q Lazzarus's "Goodbye Horses"

for Gumb's dance before the mirror, and Tom Petty's "American Girl"

--precisely the song Smith would be singing to in the night in her little blue Volvo before her uncertain future) both set a mood and add to the characterizations. And of course there's Hopkins and Foster. Both create characters out of stillness, reaction, and speech. Hopkins remains a revolting, unforgettable villain. All of these elements and more make this modest production-turned-sensation a classic that's yet to be paralleled in its genre. **** 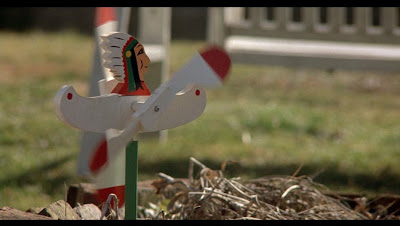 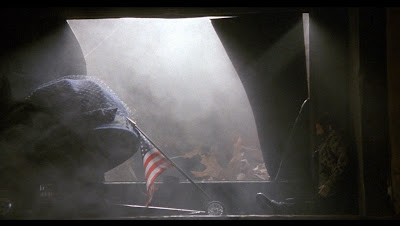 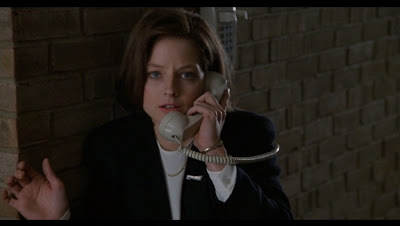 Posted by MrJeffery at 8:42 AM