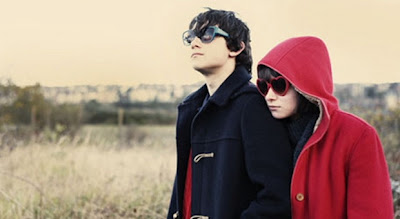 and Bill Forsyth’s 1981 film Gregory’s Girl. It centers upon Oliver Tate (Craig Roberts), an awkward, idiosyncratic 15 year-old living in Wales with his father Lloyd—a withdrawn marine biologist (Noah Taylor) and mother Jill—a demure office-worker (Sally Hawkins). Oliver falls hard for feisty classmate Jordana (Yasmin Paige) who is much more seasoned than her peers, stricken with eczema and somewhat of an outcast. Oliver and Jordana quickly fall in love. Meanwhile Oliver worries about his mother’s redeveloping feelings for their new neighbor and Jill’s old flame Graham (Paddy Considine), a sleazy mystic with a mullet. As things become more emotionally involved, Oliver intentionally attempts to sabotage Jill’s relationship with Graham, while unintentionally sabotaging his own with Jordana.

The strengths of Submarine lie in its visual style. Even though this is television director Richard Ayoade’s debut, the film has a brazen, accomplished aesthetic quality. The atmosphere of is richly portrayed in the sounds of crashing waves and the foggy, seaside setting. Ironically Submarine employs a visual and symbolic technique that is important to Graham’s mantra: using color as a means of seeing and understanding others. Jordana is passionate red in her heart-shaped glasses and coat that recalls Christina Ricci’s Little Red Riding Hood poncho in Ang Lee’s The Ice Storm

. Oliver is a cool, lovesick blue (in his dolphin print sheets and Harold & Maude

-esque navy toggle coat). Oliver humorously notes that if his father was a color “it would be ochre or eggshell.” In the spirit of autumnal-styled films of the 70s, cinematographer Erik Wilson creates a moody, beautiful look. I kept getting the chilly retro vibes of The Ice Storm

. Ayoade notes, “Nestor Almendros … was the main influence in that he doesn’t really light. It’s natural light, often shooting at dawn or dusk and just trying to be simple with it; not being fancy, not having lots of big film lights… We were in Wales and it was autumn and it was freezing cold so there was a very specific kind of watery, thin light.” Even though the visuals are distinctly vintage, Submarine doesn’t really seem to take place in a particular era. Memorable hairstyles are on parade: Oliver’s Harold-ish fringe, Jordana’s boxy black hair and bangs, the bushy mane of bullied Abby Smuts, Graham’s mullet, and primly-cut Jill who longs for her lengthy Denueve locks of yesteryear. In tradition of Wes Anderson, the costumes by Charlotte Walter are not only notable for their use of color and pointedness about character but also their distinctiveness (the characters rarely change out of them). The production design is also well-honed, knowing and eclectic—from the bubbling aquarium in the Tate household to Oliver’s classroom adorned with photos of dead writers. In perfect harmony with Oliver’s grandiose opinion of himself, he is introduced in the same profile position as a picture of Shakespeare above him. Even while referencing mix tapes, Crocodile Dundee

and school discos, the film pays homage to a certain kind of Paper Chase

, prep school timelessness: the film’s look could be 1986 or Urban Outfitters 2011. Oliver’s loving rush of Super 8s of Jordana frolicking along the beach reminded me of purposely blurry and dark snapshots of hipster friends on Facebook. Something that is endearing and lovely but also somewhat cloying. The editing too by Nick Fenton and Academy Award winner (for Slumdog Millionaire

) Chris Dickens is quite snappy and sophisticated. The opening sequences in particular are enjoyably and humorously edited with freeze frames in the same manner of Alexander Payne’s Election

The music too is a highlight. Andrew Hewitt’s original score

is quite rich. Instead of folksy doo-dee-doo with a dash of xylophone—a kind of whimsical score frequently used in quirky indie comedies of late like Juno

, Hewitt uses lush orchestrations. Jordana’s musical cue, full of pipe organs, is both gothic and romantic. The dense visuals and the loftiness of the score did help move the film along even if the story at times felt thin. The original songs by Arctic Monkeys front man Alex Turner are tender, fitting and a bit Nick Drake-esque. The closing credits are accompanied by “Piledriver Waltz,”

an appropriately woozy (it changes time signatures from standard to ¾ waltz mode) love song that reflects the unsteadiness of Oliver’s character and emotions. 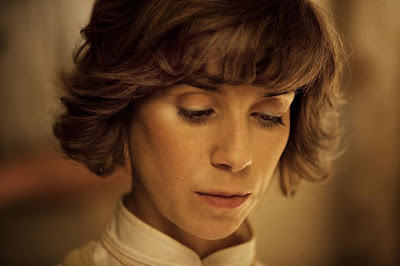 Coming-of-age tales are often stymied by an insistence of being too within the young character’s frame of mind (for example, the creakily presented plot twist in an otherwise perfect An Education

). It becomes even more difficult to connect when a film is less concerned with realism and more with style. Because Submarine is so wonderfully detailed and the actors are so good and well-cast, it’s a letdown that Submarine’s script is so thin. The forlorn, distant bearded father and the aquatic themes kept reminding me of Noah Baumbach’s The Squid & the Whale

, which seemed to me a more expansive and moving portrait of a brittle family, going in and out of various points of view. Submarine admirably but unavailingly remains within the confines of young Oliver’s emotionally limited psyche. He is unable, for example, to empathize with the sickness of Jordana’s mother. Feeling left out, he goes to great and unbelievably caustic lengths (attempts to poison her dog for example), to win back Jordana’s affection and attention. It’s in this second half where Oliver’s unconvincing antics become tiresome. Graham’s sleazy psychic character (a la Patrick Swayze’s motivational speaker in Donnie Darko

) remains quite cardboard by the story’s end—disappointing since Paddy Considine’s performance calls for something much more layered. It’s difficult to believe Jill’s attraction towards him when Graham is such a caricature. Abby Smuts piqued my interest as a potentially compelling character, especially because she’s so vividly introduced (in freeze frame, seconds before falling into water—one of the most memorable shots of the picture), but the film—and Oliver—quickly dispose of her. Also, sudden bursts of rapid fire dialogue delivered by pale young men in a flat key has become such a cliché of teen angst tales (and television commercials) that it often took me out of the picture.

Even if the film often favors montages and precocious Oliver voice-overs over intimate scenes, there is enough comedy, nuanced performances, and much to admire about Ayoade’s inventive direction to fill Oliver’s emotional void. **1/2

-Jeffery Berg
Posted by MrJeffery at 7:03 AM