the person behind the camera 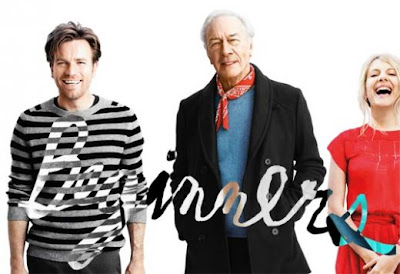 ) background as a graphic and commercial artist shapes the visual wonder in his brilliantly crafted and emotionally deft new film Beginners. In some lovely moments, strung along with Ewan McGregor's (one of his most sensitive and best performances) voice-over, Mills collages images in RedOne: a trash bag against a black background, a soon-to-be-cancelled credit card (the banal debris of death oft-ignored in movies), or a quarter, or the colors of the rainbow flag, or magazine ads ("this is what sadness looked like" in a particular year). It isn't necessarily important to know Mills's background, but it does add an interesting layer to the film. "This filmmaking style is really me," he notes, "I went to art school, not film school, so I have that language. I think like that, but you don’t have the nerve to ask to do it in a feature. I do think I was in a life crisis when I wrote the film. My second parent had just died, I was 38 years old. I wasn’t at all sure that the world would let me make this film. But it’s the film I’ve always dreamed of making. I put all the elements of my life into the film." Beginners

is knowingly cinematic (the winningly adorable terrier in the film has subtitles), sometimes coy, but a very moving memory mood piece of starting over in many different ways. 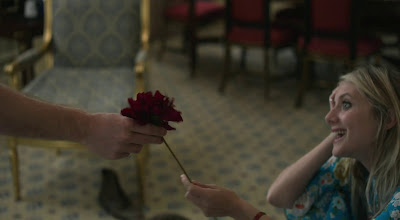 Ewan McGregor is Oliver, an affable artist living in Los Angeles, grieving his father, Hal (Christopher Plummer in another flawless performance) who had shortly before his death, came out of the closet. At a costume party (the West Coast version of the sort of soiree upper class Brooklyn brownstone artist types might throw... Mills is married to Miranda July after all), decked out as Freud, Oliver meets Anna (the gorgeous, indelible Melanie Laurent who proves her breakthrough turn in Inglourious Basterds

was no fluke) in Chaplin drag. Anna, unable to speak due to laryngitis, charmingly and movingly flirts with Oliver via notepad. The film moves back and forth through this budding romance and Oliver's memories of his father's last days. Mills is adept and confident in not changing film stock--something that keeps the unusual structure of the film kinetic and keenly alive. Mills, Plummer and McGregor's exquisitely subtle reactions are particularly poignant in showing Hal's earnest and exhilarating journey as a newly out man in his seventies. Hal dates a younger man (Gordon Visnjic, who does his best with one of the film's weaker characters), binge-shops at Staples and bookstores, stuffs envelopes for a gay congressman, has movie nights with gay friends (to revel in a revolution he missed out on by watching of all appropriately earnest things, The Times of Harvey Milk

), and dons a dated, Boys in the Band

kind of fashion: scarves, a purple sweater (Oliver continuously mixes up what clothes were worn in the important life-changing moments). Both Hal and Anna remind Oliver of his late mother. Played wonderfully by Mary Page Keller, the strength, suffering and intelligence of Oliver's mother comes through in some of the films most marvelous moments (the droll and quirky ways she behaves in an art museum, for instance). 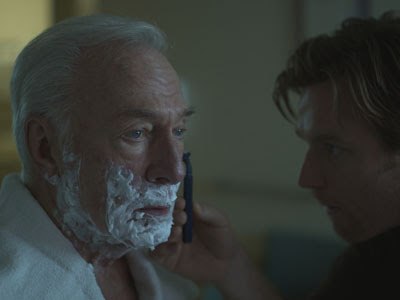 Movies often lose the person behind it: the facade of cinema is literally pointed out to us when Anna and Oliver, in their favorite used bookstore haunt, flip through the unhappy endings of Hollywood's glamorous legends. The story of Beginners

's Ennis and Jack would have been happily-ever-after had they just moved to San Francisco). Much credit goes to the remarkable editing by Olivier Bugge Coutté and the beautiful photography by Kaspen Tuxen. The score

and the carefully chosen piano rags give the film a wistful and timeless Woody Allen patina. The nonlinear fashion may prove a bit of a strain for audiences and the enormous emotional depth of Plummer's performance may overshadow the subtleties of those around him. I am happy though to see a film that doesn't lose the person behind it: Mills and his cast and crew have created a stirring elegy. ****

Musical inspirations for Beginners.
Posted by MrJeffery at 12:28 PM