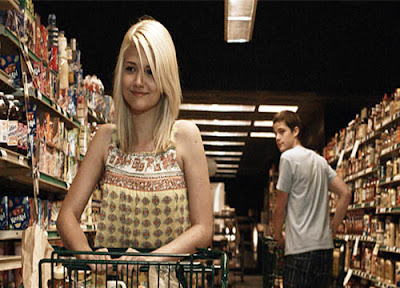 About as deep as twee-pop, The Myth of the American Sleepover follows an array of suburban Michigan teens navigating crushes, parties, and first kisses.  Even if the film lacked an emotional payoff and reminded me too often of American Eagle ads, in his debut, David Robert Mitchell impressively blends multiple story lines together and confidently establishes a quietly dreamy, late-summer mood.  The spare dialogue and earnest, awkward performances (especially an expressive Claire Sloma as a short-haired, pierced lipped girl with a lifeguard longing) work well.  If the experience of Sofia Coppola's Somewhere

was about the claustrophobia of the privileged, Mitchell's Myth is a much deeper meditation on the claustrophobia of teenagerdom and the difficulty to communicate desire.  Mitchell aptly makes small, uncomplicated moments seem grand (Sloma's decision over kissing her lifeguard on a water slide is one of the most poignant scenes). The film's most interesting character, and perhaps the easiest one for adult audiences to relate to, is an older brother of one of the teens who suddenly becomes obsessed with linking up with younger twins from his high school theater glory days.  The idea that "he can't have both" is a nicely drawn conceit.

There is something wistful about the movie and the way it left me, especially since it doesn't really seem to pertain to today's Facebook, text and chat obsessed culture (diaries, letters, and writing phone numbers on hands, arms, and scraps of paper are all largely symbolic motifs).  I was often perturbed by the restless, long haired girls in the row in front of me, intermittently in the glow of their cell phones but they added to the viewing by contrasting what this film pines for. ***

Interview with the film's director David Robert Mitchell in Black Book
Posted by MrJeffery at 7:43 PM