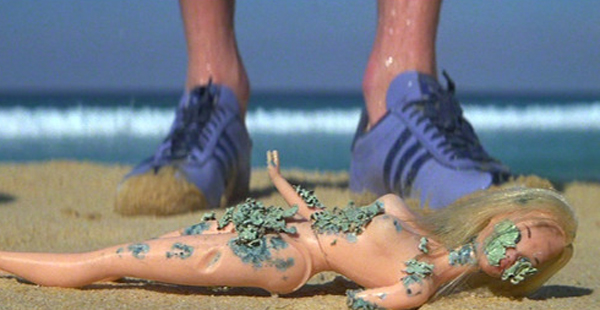 Long Weekend is another entry in the don't f with mother nature horror pics of the 1970s but this moody Australian film is a different kind of animal.

An unhappy, constantly bickering couple with past wounds between them end up away from the comforts of civilization and within woods near a strand of beach.  They aren't too kind to each other (their constant fighting and abrasiveness wear a bit on the viewer) or their natural surroundings, spraying aerosol insecticide, shooting birds, running over kangaroos, and hurling beer bottles into the sea.

Alfred Hitchcock's landmark The Birds showed people getting attacked by nature in the comfort of a home and school, Long Weekend takes it to a seemingly docile, scenic wilderness.  The movie, somberly directed by Colin Eggleston, has an eerie feel, saturated with ironic, day-glo colors and filmed in anamorphic widescreen.  Many eco-terror movies of this era are campy (Empire of the Ants, Squirm, and Frogs), but Long Weekend is more visually sophisticated and serious.  The human interactions are the weakest aspect of the movie (Briony Behets's shrill cries for "Peter!" are pretty grating) but the best moments go headlong into their moments of isolation in the riled-up wild and within the cob-webbed forest: entering, with headlights on trees, and trying to exit, in a desperate, final run.  ***

Posted by MrJeffery at 6:24 PM