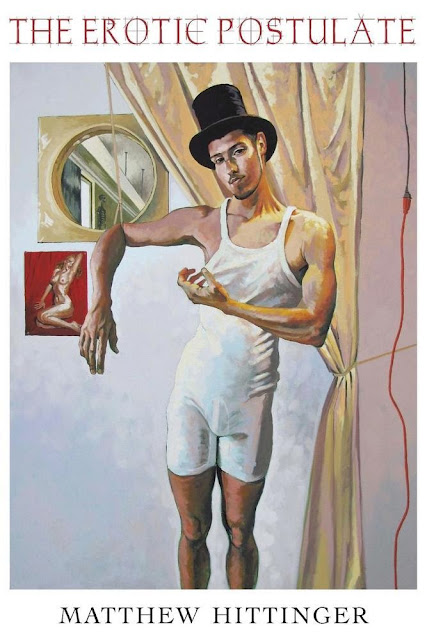 I majored in Art History by accident. It’s a classic liberal arts story, how I thought I would be studio arts track and the required Art History I & II courses took me down a different path, thanks to a charismatic Art History professor. Poetry was the other derailer, or the revealer, as I traded brush for pen. Though that’s a narrative I’ve constructed. To be honest, painting, poetry and music were all equally part of my childhood. But I made a choice to pursue one over the others, and here I am.


I first encountered this work at the Philly Museum of Art's massive Thomas Eakins show in the early 2000s. My then-boyfriend Brian bought me the exhibit book for X-mas and tickets to see the show, and I had one of those “Stendhal Syndrome” moments in front of this canvas: 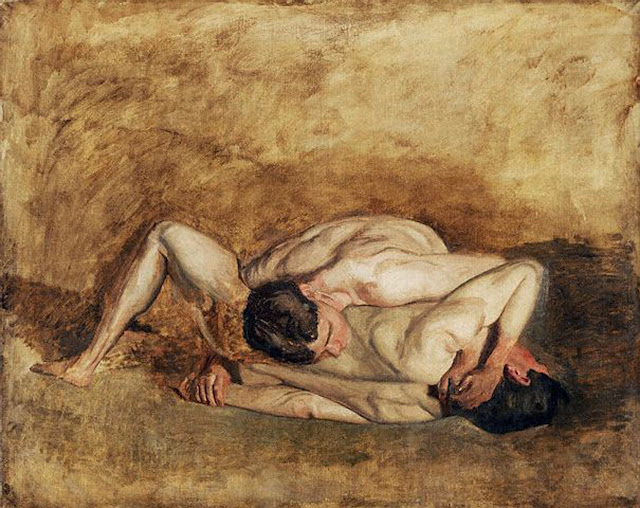 A finished version of this work exists, but the idea of an unfinished painting coupled with the moment frozen in time of the wrestling match unfinished got me thinking and writing and wanting to capture the feeling the painting aroused in me. Wrestling is homoerotic, the sexual act frustrated and unfinished in a suggestive pinning of one back to the mat. The poem tries to capture that, plus the unfinished quality of the painting, eschewing punctuation and stopping before the reader's desired ending comes.


As the poem relates, I first discovered Hockney’s work via a television documentary, again in the early 2000s. His use of Whitman quotes in his early work, We Two Boys Clinging Together caught my attention, and then his handling of color and light once he moved to southern California. 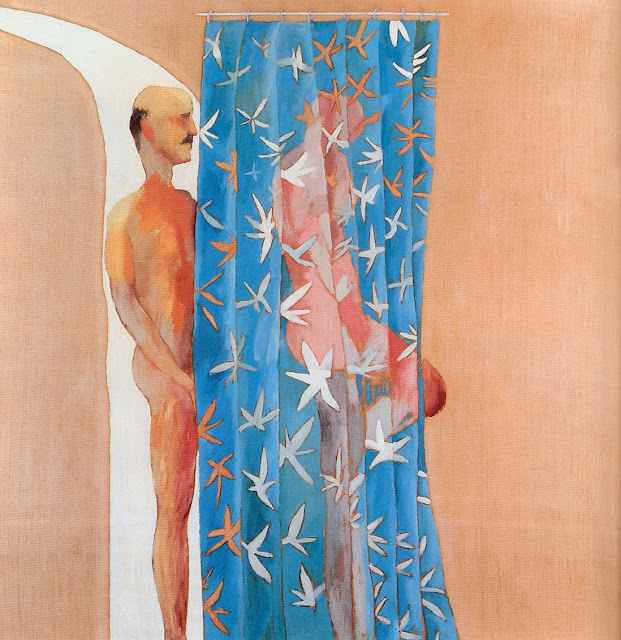 As I started reading up on him, some quotes stuck in my head and got echoed in this poem: “The central problem of depiction is that it is not an attempt to recreate something; it's an account of seeing it...Cezanne told us that; he wasn't concerned with apples, he was concerned with the perception of apples.” His ever-evolving experiments to better capture how we “see” such as the use of polaroid photo montages, was a jumping off point to meditate on a scene. One from real life, my boyfriend and me in the shower, echoed by his painting of two men in a shower, that taboo of two nude male in a gay domestic situation. At the time I felt I was breaking all sorts of silences, “coming out” on the page by taking gay art and gay domestic scenes from my relationship as subject matter. The crux of the poem, of any poem, is me wrestling with the fact I'm not just trying to recreate a scene for you to experience, but both capture it, a way of seeing it, a perception of a moment, and create a moment for you on the page. Hockney reminded me that “the observer, in effect affects, what he is observing...It is no longer possible to have ideas about reality without taking our own consciousness into account.” Hence the gesture to address you, viewer-voyeur, in the poem.

I wrote “Two Men on a Bed” a year after “Two Men in A Shower.” It is a companion poem, and the title intended to mirror the other. Where Hockney's pastels and domestic scenes caught the attention of one side of my desire, queer domestic life, Bacon's dark animal energy grabbed a different, rawer, more dangerous side. 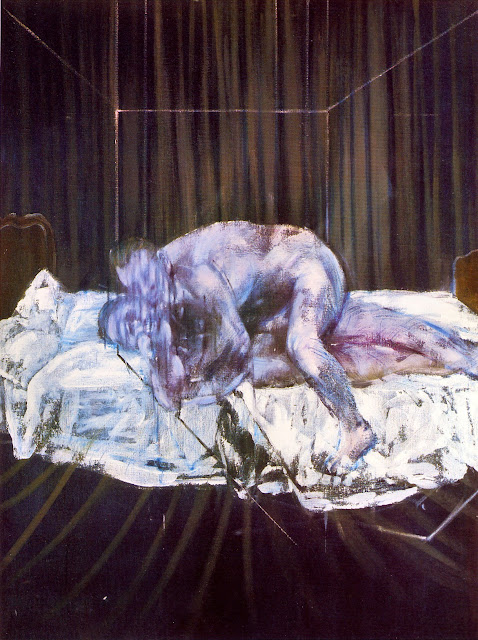 
During grad school I took a seminar on the Histories of Homosexuality and things I was learning from that class, such as the year the word “homosexual” was first coined and used (in an 1869 German pamphlet) made its way into the poem. The construct of our sexual identities as identities is a very modern notion, and that move in the poem to move from the language of History to personal history (it was a histories class after all) was a bit of a jab at the instructors who were always outlawing personal narrative as a valid approach to queer theory. As the poem relates, Bacon was clearly influenced by this Eadweard Muybridge photo:


Eakins was also influenced by Muybridge's experiments of the body in motion, taking three or four separate images and superimposing, editing, placing them in relation to each other to create a new thing. Pastiche of say four bodies, yet totally different as each image redefines itself in proximity and relationship to the others. What once held no meaning in singularity reveals bold new resonance in conjunction, for instance here, in Bacon's hands, turning a photo of two wrestlers into lovers by introducing a bed. And then the trademark dark qualities of a Bacon painting, ghostly bodies, the slightly sinister teeth bared like an animal, the streaks of paint coming down like bars. I'm not interested in just describing this scene, but questioning the need to call out such details, to anchor it in my own experience, for good or for bad. This is my impulse: to blend ekphrasis (writing about art) with personal history with politics. To question a composition depicting gay sex and all its expectations, namely “who's on top?”

During that Histories of Homosexuality seminar, one of my projects was to research gay artists for a hypothetical syllabus/class focused on queer aesthetics. That’s when I discovered the image below. 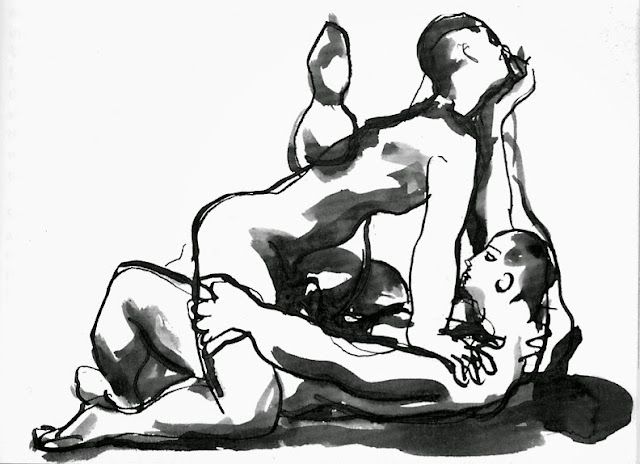 
It's from a pen and ink wash series by Duncan Grant, and I knew immediately it was going to be the basis for a companion poem to “Wrestlers Unfinished.” I found the composition and handling of ink suggestive of an orgasmic climax, hence the tweaked title “Wrestlers Finished.” It should tell you something too about how and why the poems are sequenced the way they are in that first section.

There are many other visual reference points throughout The Erotic Postulate: that lightning bolt painting in “Two Ones Remain Two Ones,” for instance, the title of which I cannot find (I need a trip to the PMA to see if I can locate it fifteen years later!); various photos of Minor White's in “A Minor Dilemma.” And lots of Brooklyn Bridge art in the Euclidean City section: watercolors by John Marin and Max Weber; Joseph Stella's epic The Voice of the City of New York Interpreted; photos by Walker Evans; even a Georgia O'Keeffe oil. And Joan Miro's oil “Dog Barking at Moon” and its companion poem. But I'll leave those for you to discover. 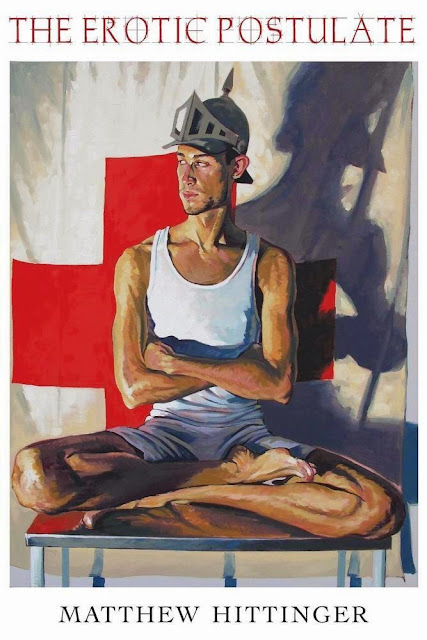 I love Modern Art and am drawn to the abstract, but a central question that rose for me was: can you have a queer abstract art? Is abstract art by its very rejection of representation, a queer way of seeing? And do you need queer bodies to make queer art, queer? I still wrestle with these questions. That's the beauty of poetry and time—to explore and continue to test out hypotheses at various points of my life through language, image, and rhythm—the words, the things I see, the cadence of them changing as my experience of the world changes. And all without ever having to find “the” answer.