I recently sunk into a nice double feature of Jeff Lieberman's Just Before Dawn and Blue Sunshine--part of the repertory series at the Quad Cinema (a very sleek, red and black color schemed remodeled and revived Quad). I had enjoyed both films previously but as always, there is something about a screening in a theater that induces feelings of renewed appreciation. This also happened when I saw a scratchily rich 35 mm print of Lieberman's worm horror show Squirm at the Anthology Archives, a movie that becomes much more hilarious and fun with a game audience. 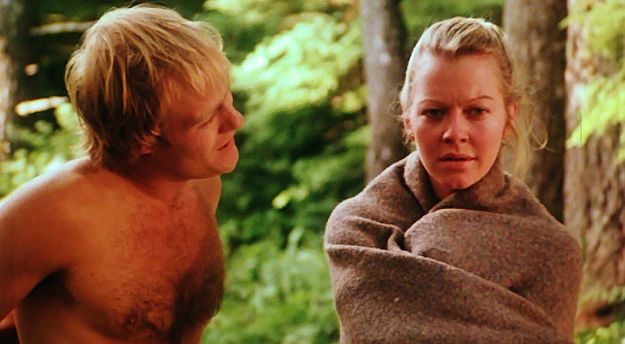 Just Before Dawn is a tranquil slasher filmed on location in lush Oregon mountains. A crazed, heavyset mountain-man with a hoggish wheeze (John Hunsaker) stalks a clan of relatively inexperienced hikers there to explore the property of an inheritance but to also fool around and take snaps of the scenery. Akin to Deliverance, the group, with all their modern commodities (makeup, sunglasses, boom boxes, a massive camper) and blase attitude, fare poorly against the killer and the elements. A mysterious young girl raised in a cabin in the wilds appears off and on as do her guardians--the father dismayed at their intrusion. A say-it-plain George Kennedy plays the ranger; there was something wistful on this viewing to see him in this small role, perched upon on a horse. 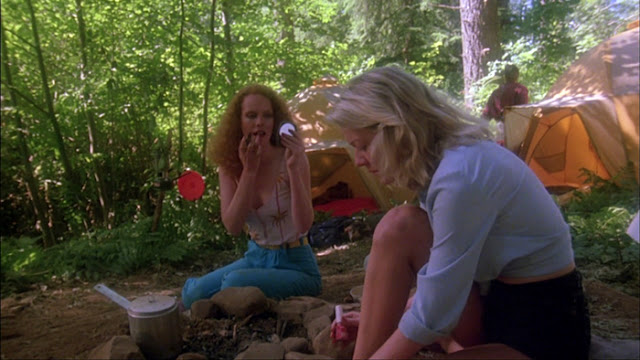 There are memorable scenes galore in this picture (my favorite may be the graveyard and abandoned church murders filmed in atypical hazy daylight). The shock ending, fairly well-known, continues to be a stunner. Deborah Benson is particularly alluring as the final girl--with both delicacy and determined grit in a knot-tied pale blue Oxford and booty shorts. Another highlight is the soundtrack which sports Brad Fiedel's (later famed for Terminator) unusual score (with haunting whistle calls and electro keyboards); the cascading disco of Blondie's "Heart of Glass" contrasts with the natural world around them but is also gorgeously of its time. Lieberman noted in searching for locations he ditched the redwoods and preferred the claustrophobic greenery traps of the movie's setting. The relative slow pace, the film's playful sound design with its oft use of quiet (flickering flames and streams), and the lush setting definitely adds an eerie, "lost" feel. *** 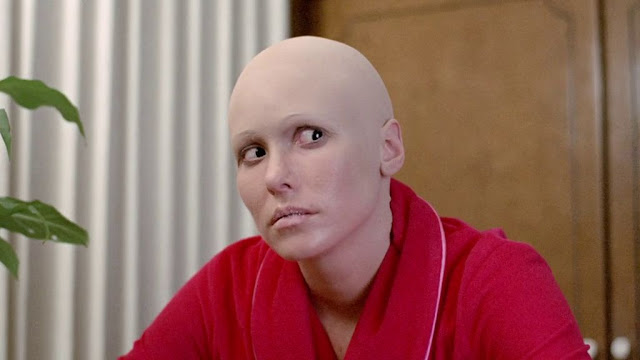 Blue Sunshine is definitely a more outrageous outing and such a magical pairing with Dawn. There's a certain elegance in viewing the sunrise in Dawn's coda and then moving into the stark full moon visuals in the loopy, unusually protracted opening credits of Blue Sunshine. The movie follows a group of adults suffering from an onset of alopecia areata and manic killing--a late symptom of their trippings on the titular acid ten years prior at Stanford. Lieberman's social commentary is both pointed and frightening--with an innocuous campaign for Congress spinning away in the background. 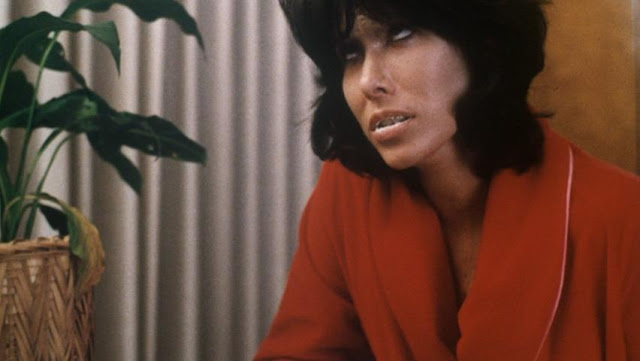 The murder scenes are both creepy and wildly comical as is a walk through a crime scene--white masking taped body outlines in bloodied burnt orange carpet with the soundtrack pounding away. The movie is about a generation struggling to grow older (a woman mentions putting the past behind her in order to come to terms with the split-up of The Beatles whilst wearing a Mickey Mouse tee) in the midst of the jaded and materialistic, post-Nixon seventies. The wide-eyed, starkly bald adults going on rampages makes for particularly striking imagery. The concept is so fascinating that the main Zalman King (making many bewildering acting choices and looking like shaggy-haired Sean Penn) innocent-fugitive-unraveling-mystery plotline feels more like window dressing. 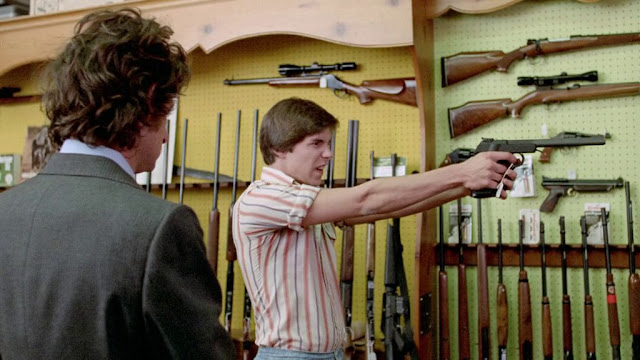 Post-screening, Lieberman noted his generation's particular concerns at the time. In cinematic historical terms, the government warnings of atomic war which shaped the 1950s monster movies is morphed here into the late-1960s government warnings about acid, and a "what if?" nightmare scenario placed in the 70s. He also noted hair as a powerful symbol of the Boomers ("there was even a musical about it"). I am grateful particularly how he captures a discotheque where one of the rampage occurs and also the pre-Dawn of the Dead, almost suffocating atmosphere of a department store in a mall, jam-packed with plastic-wrapped merchandise. There's even a quick glimpse of an ad for Network in one of the newspapers. ***1/2

In both of these movies, and also in Squirm, there's a certain heartfelt wryness, mischievousness, and an acute ability to create moments of tension and low voltage camp that is wholly attributed to the filmmaker.

Posted by MrJeffery at 6:24 PM