Somewhere in cracked clay terrain beyond the legal line of Texas lies trash dumps and fearsome mini-societies of exiled Americans. After showing much promise with her vampiric directorial debut A Girl Walks Home Alone at Night, Ana Lily Amirpour returns with The Bad Batch, another richly evocative mythical tale in a dystopian key. Lyle Vincent (my personal  Best Cinematography winner of 2014!) is also back with indelible photography, this time in garish and ghoulish grindhouse-color. Reminiscent of George Miller's Mad Max and Quentin Tarantino's Kill Bill, Vol. 2, The Bad Batch is a swerving survivalist fable with dabs of social commentary, gore, and desert-dry humor.

For the squeamish, it's good to know that the most graphic sequences in the film are early on, when Arlen (Suki Waterhouse) is captured. Amirpour's insistence on practical effects make for realistically grim make-up work. It's a rough, nauseating sit in some of the opening scenes--set in a hollowed-out 747, overrun with tatted, hyper-muscled and cannibalistic Venice Beach-types (Jason Momoa is a ringleader of sorts in this universe). However, our laconic and purposefully obscured heroine soon hobbles her way to a community of desert hippies at the mercy of tongue tab drugs supplied by their mysterious leader The Dream (well-cast Keanu Reeves). The exiled misfits do not dwell in open, natural surroundings--instead, they are well-padded within ramshackle sets of chain-link fences, wind-blown plastic bags and detritus--seemingly leftover from an early 90s era (when Ace of Base and cast members Reeves and, an unrecognizable Jim Carrey, were at their most ubiquitous; now they are just part of a mythic wasteland); these objects make for exaggerated, bluntly ironic cues--including a patriotic puzzle. There is literal social commentary in the litter everywhere from meat-eating to racism to upending power structures; at times, it seems to be a harsh satire of hamburger-chomping, "comfort"-seeking Americans. And yet, cleverly, the obviousness of the commentary is both tongue-in-cheek and faintly endearing rather than cringe-inducing (look out for "the Dream is inside me" tees on pimpish Reeves' clan of impregnated women). 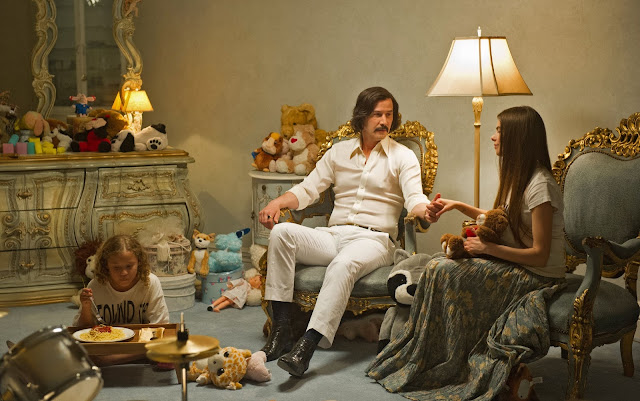 The sound design is particularly magnificent, especially in tripped-up acid western scenes. As is the music supervision (Andrea von Foerster), with wavy electro-disco tunes roiling about. A cassette version of "Karma Chameleon" is appropriately tinny within Walkman headphones; the lyric motif "you come and go" is also resonant of our main characters' strange journeys. Even though Waterhouse and Momoa are sort of wan leads within Amirpour's meandering, stretched-thin narrative, the picture has so many artistic strengths and is also not easily forgotten. I am again looking forward to what she does next. ***