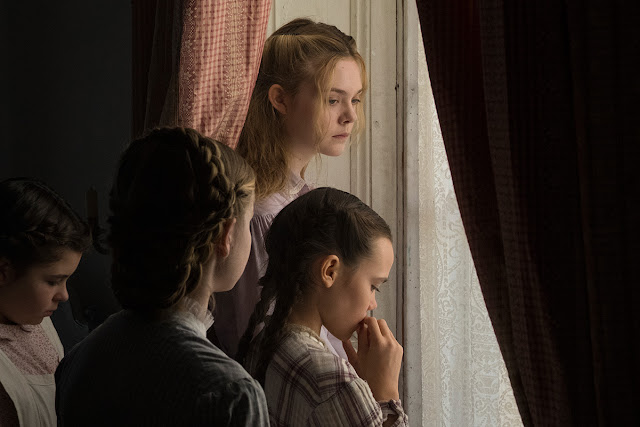 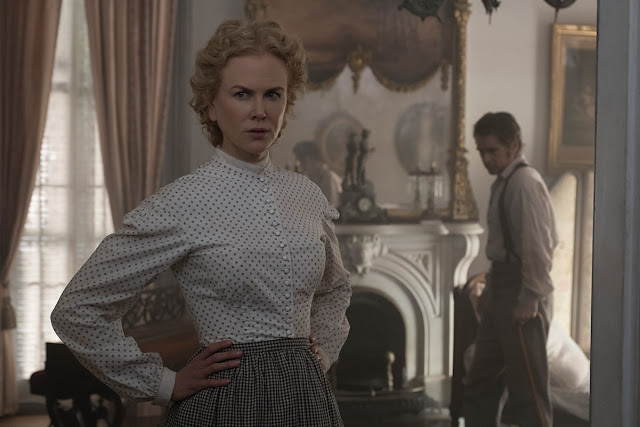 Nicole Kidman plays the headmistress running the mansion, who lost her husband to war. Kristen Dunst is the main teacher, attracted to the Corporal and also to his idea of running away with him out West. We sense the loneliness from both the aesthetics (pent-up emotions in stitching and the tied knots of ribbons) and the actors themselves--Dunst in particular feels the most immediate. Kidman still delivers the best ice-glares of any living film actress but also discovers an acute physicality in elegant and symbolic poses--a brave protector of sorts of her girls. And Farrell always has a knack of absorbing his characters believably and without hesitancy. Elle Fanning as the loopy, more brazen student, is, perhaps purposefully, affected with more contemporary acting choices and colloquial language. 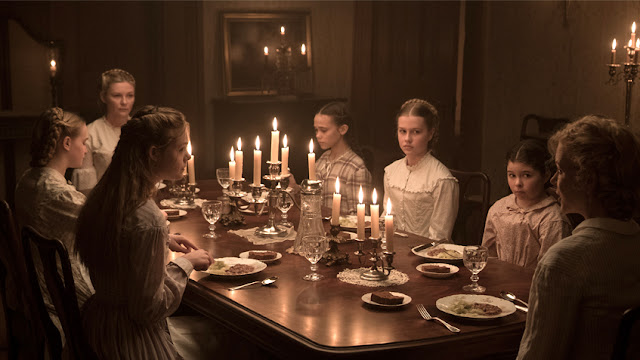 The film is based upon a novel by Thomas P. Cullinan which was adapted in 1971 by Don Siegel for a movie starring Clint Eastwood. Supposedly that venture is much pulpier. Sticking to her trademark style, Coppola's fever dream is visually pitched in muted creams and pinks, with dark backgrounds. There's even the frilly pink lettering of the main title card (similar to the girls' cursive lessons). The cinematography by Philippe Le Sourd is fuzzy like strained eyesight and mis-remembered memories. We watch candle lights flicker, the pale faces of the women and young girls lurk in and out--their dresses glowing faintly in soft-colored cotton and satin. It's beautifully orchestrated, as Coppola's films usually are, with a sharp exquisiteness and a hushed somberness. Like the pet turtle in the movie, slowly moving about, nestled in its shell, there's a sense of isolation and of being cut off from traumas just outside of the setting's perimeter (as in Marie Antoinette): off in the near-distance are passerby soldiers on horseback in the mist, the muffled booms of cannons--smoke rising from trees--a quiet rattling of their coziness and structured daily lives. There isn't much of a soundtrack though this time. Instead Coppola selectively employs brackish, dirgey electronic long notes from Phoenix and the schoolgirls' hummings and out-of-key vocal, piano, and sawing violin renditions of rounds and Stephen Foster tunes. There's also the sound of war muted by distance overpowered by the locusts and the birds (are they larks or just robins?). However the aesthetics are sometimes somewhat out-of-sync with the source material. Even though the more sensationalist, plottish moments (unfortunately predictable thanks to heavy-handed symbols and the movie's thriller trailer) fizzle, perhaps the polarization of these times in America adds to a simmering intensity to the picture right now that the film itself may lack. ***

Posted by MrJeffery at 4:56 PM