Steven Soderbergh's iPhone 7-shot mini opus mental ward-set thriller persistently toys with audience's perceptions of what is real and what is imagined in an era where much of our visual lives are now drawn to the screen of a phone. Sawyer Valentini (played by The Crown's Claire Foy, who shows a shade of fiery intensity many of us haven't seen yet) has a bland office job and has seemingly unwillingly committed herself to the unsettling Pennsylvania hospital. She desperately wants out and is thwarted by bureaucracy and unconcerned employees and by the taunting of some of her fellow patients. Furthermore a mystery emerges whether or not one of the workers there is a man who previously stalked her. 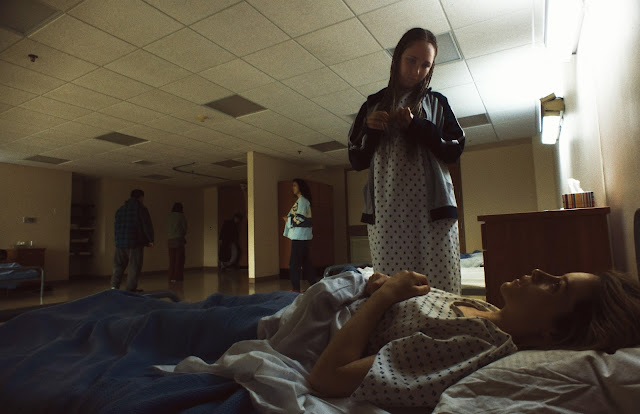 A filmmaker who has oscillated between sublime pieces and clunkers, Soderbergh remains one of my favorite directors. Even his less successful works have an inner charm and a textured feel. Last year's underrated shaggy summer heist Logan Lucky boasted excellent technicals, jokey characters and situations bolstered by an emotionally sincere backbone. Unsane is less satisfactory but still intriguing and enjoyable cinema. Although the grimy iPhone photography lends itself to a simultaneous feel of gimmickry and impressiveness, it's not the only stunt here.  The movie plays deadly serious but is also imbued with tongue-in-cheek humor and references galore (from 70s grit like Cuckoo's Nest to moody slasher pics like Halloween II to schlock adult thrillers of the early 90s). Matt Damon explaining a litany of how-to's of dealing with a stalker is unabashed Soderbergh-corn. Amy Irving, who delivered a memorable turn as Sue Snell in Brian DePalma's Carrie, serves up a WASP-y presence here with acting tics that feel of another time. Juno Temple, who shined in Woody Allen's Wonder Wheel, does her best with an over-the-top cardboard role (something we see a lot in the cackling, twitchy patients of prison and Snake Pit flicks and TV shows). The cell phone also becomes a literal lifeline as one of the patients (played with low-key ease by Jay Pharoah) sneaks his to Sawyer to use. Thomas Newman's score of click-clacks, buzzing distortion, and a descending piano drone theme, adds to the Sawyer's desperation and is some of his most interesting work I've heard in a while. For those--like some of my groaning audience companions--who may not be thinking of the film in context of Soderbergh's filmography, may find Unsane understandably unappealing but it's rich for those like me who enjoys adult thrillers and Soderbergh's offbeat eye. *** 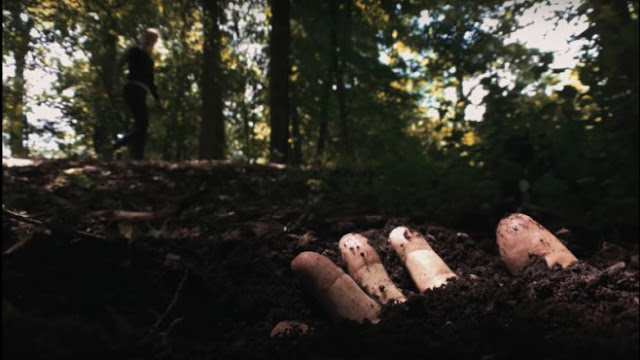 Posted by MrJeffery at 1:16 PM