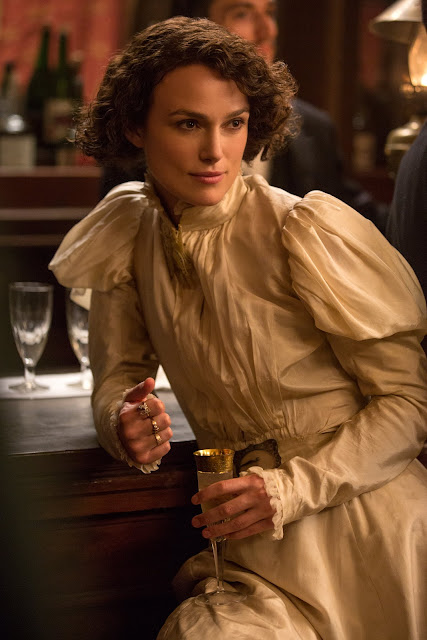 Films about writers can be touch-and-go; the worst are dreary and unmoving, while the best leave you with the ache and desire to dive into an author's work. I came to the film Colette with only a surface knowledge of her life. Perhaps there are those who would find this biopic, mostly of her in marriage to Henry Gauthier-Villars, nicknamed "Willy," inadequate. Not to mention, the movie feels and sounds more like a sun-dappled early 90s period Brit pic than a movie about the French. But to me, Wash Westmoreland's movie is a supple surprise--a deliciously entertaining introduction to an artist. It concentrates mainly on Willy and Colette's complicated rise to fame through the  popular Claudine novel series which became a sensation in its time. The books are Collette's own, somewhat autobiographical, but published under Willy's name. While she freely writes the first, he commands and even locks her in a room to write more in the series, the books fulfilling both his bank account (no mistake that he uses "going to the bank" as cover to visit another woman) and grandiose views of himself as a societal figure. I couldn't decide if he adapts to her flourishing sexuality or if he simply is permissive of it, albeit begrudgingly so, as a form of control. Perhaps there are elements of both. He, and his relationship with Colette, are complex--snarly and gilded with touches of wit. Having recently done marathons of the cooly contemporary prime time drama "The Affair," it was unnerving to see Dominic West so different and in such broad period mode. Nevertheless there are some parallels on display between Willy with Noah Solloway--the grandstanding, the egomania, and, of course, the using of women. Keira Knightley's role is daunting, but she plays it with a seeming ease that is lacking in the forced nature of some of her other work. It's a genuine and sparkling turn. 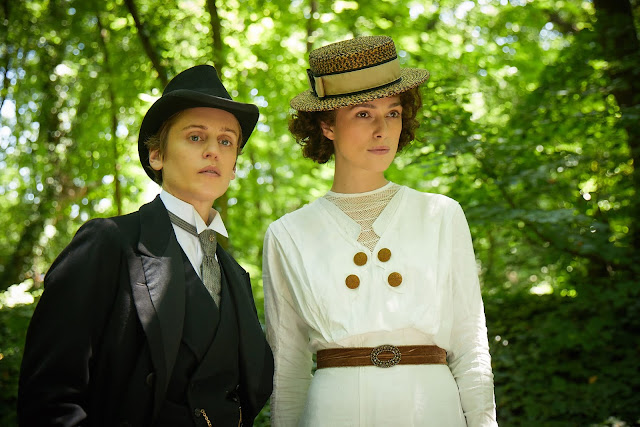 At times, the film felt awkwardly pieced together, with abrupt cuts. In particular, there was something absent in the movie's portrayal of Colette's relationship with Missy (a quietly compelling Denise Gough). Yet there's something exciting how free they look together on-screen. The lack of quibbling over sexuality and gender-identity is one of the movie's heartening strong points. 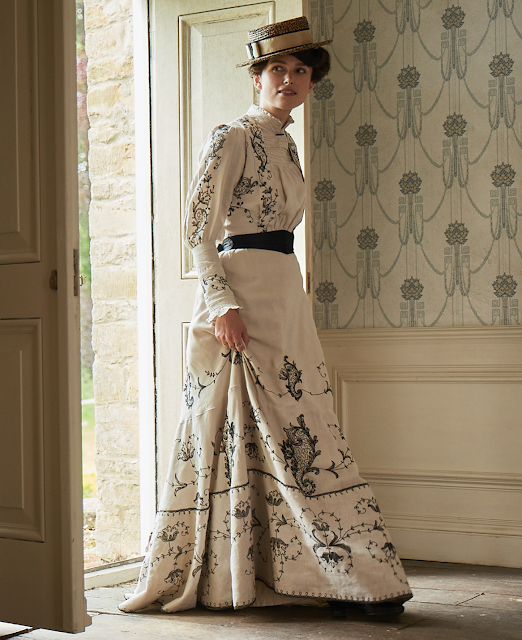 Westmoreland's crew does some lovely work. Andrea Flesch's costuming captures Colette's iconic styles and the changing Parisian fashions moving into and within the early twentieth century. Like the most intrinsic film costumes, they complement rather than dominate the picture. I was very intrigued by Thomas Adès' score. Perhaps because he's known primarily for his classical work, Adès' music cues do not sound like a typical film score of now. I was less interested in the seemingly unnecessary thundering strings during the more dramatic moments, but there's a plainsong main theme piano and string line that runs throughout that's both pleasurable and melancholic. Unfortunately no recording has been made as of yet and I yearn to hear it again.

This is a movie, rather unsubtly, about ownership and control and about coming-of-age. Westmoreland's film co-written by himself, his late husband Richard Glatzer and Rebecca Lenkiewicz could have been rote biopic, claiming cinematic ownership over its subject, but it's a lovely and fresh tribute, concocted with care from a modern perspective. ***

Posted by MrJeffery at 8:06 PM