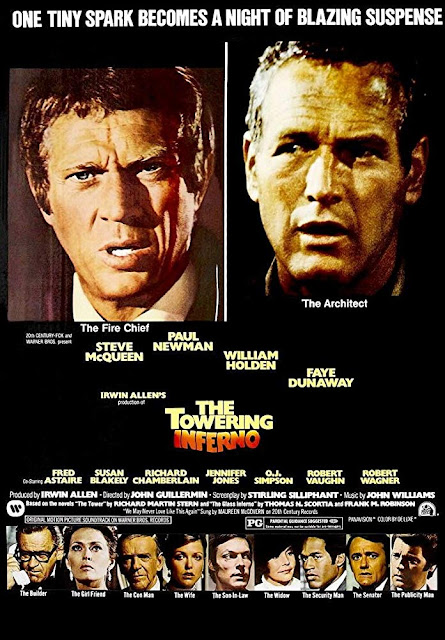 Anthology Film Archives screened The Towering Inferno this week as part of their "Infradestruction! (aka When Infastructure Attacks)" series. As part of the description of the series they ask, "Is it any wonder that in the 1970s, in the wake of oppressive 1950s-era nationalism and its demolition in the 1960s, the disaster film would take hold as a popular genre?" I had never thought of the trend of disaster movies that way and it's a fascinating take. I had always thought more how the broadcasts of carnage from Vietnam interlaced with commercials had influenced this early era of an appetite of safely-distanced destruction at the cineplex. Also the ability of disaster movies, some more effectively than others, to marry the spectacle of "old Hollywood" with the character study concerns of "New Hollywood" seems like it would be appealing in its time. When looking at the weekly top grossing films of 1974 and 1975, it is quite striking how grisly the films are, even when they are dipped in commercialized sheen (Airport 1975, Earthquake, The Towering Inferno, and the juggernaut Jaws). Believe it or not, the low-budget horror landmark The Texas Chainsaw Massacre nabbed number one at the box office for a week. And of course, The Godfather II is an enduring tale of crime and violence inflicted against one another, even within familial bonds.

My most recent viewing of The Towering Inferno at Anthology was a few days after live footage streamed the burning of the Notre Dame Cathedral, and on the day "The Mueller Report" dropped to the public. Spring was brewing in New York, bright tulips upright throughout the city, but there was still was an overhanging gloominess in the air. Under this context, I kept seeing glimmers of Jared Kushner when watching the antics of tower owner Duncan's (William Holden) slimy son-in-law Simmons (Richard Chamberlain). I sometimes think of our current President akin to villainous patriarchs of 1970s cinema, but even Duncan and Murray Hamilton's Mayor from Jaws seem smarter, more genial, concerned and sympathetic than him; the closest comparison I've seen to date is grumpy Jason Crockett, played by Ray Milliand, in Frogs, wary of outsiders and destructive to the environment and stubbornly keeping the cogs of his Fourth of July birthday turning even when his cohorts are all dropping like flies. These villains used to feel like exaggerated American caricatures. Not anymore. In The Towering Inferno, in order to cut corners under Duncan's pressure and through plain obstinate greed, Simmons riddled the glass tower with "fluky wiring." Our current administration is no doubt riddled with fluky wiring. It may be crass to compare an administration to a burning building, albeit a fictional one, but it's difficult not to think of the of The Towering Inferno without thinking of Nixon. In fact, the film was released months after his resignation. It's likely more pure coincidence of timing, but the cynicism and anxieties of the era are definitely embedded.

When writing on the attraction of disaster pictures, Erich Fromm wrote in the New York Times in 1974, "Necrophilia is the outcome of the increase of a certain socially conditioned and shared pathology of cybernetic man. He becomes ever more alienated from himself and others, suffers from a chronic low grade depression, feels powerless and caught; he has no faith in or vision of a meaningful life; he has created a lifeless world of total technicalization and bureaucratization in which man becomes an appendage to the machine; he has become a self‐acting commodity, monocerebral and with little feeling. He is afraid of rapid social change and of the danger of an atomic holocaust." Of course, this sense of powerlessness and "technicalization" and the appeal of the "event picture" continues to persist, obviously in the much glossier and unrealistic form of superhero movies --a trend, in comparison to early 70s disaster movie smashes, that has lasted much longer than I ever thought it would.

Journalist Fred Kaplan countered in 1975 that these pictures are really just part of a tradition older than Hollywood itself. On The Towering Inferno specifically, he writes, "It’s the pyrotechnics, the huge spectacle of it all—the enormous tower, the grand two-dimensional heroism, the explicitly typed characters, the big stars. And it is, on a pure nonsense level, fairly exciting and suspenseful. You don't have to think about anything. You merely have to respond to the spinnings of this giant machine’s cogs and levers. Indeed, the implicit bourgeois orientation—and this can be said for Earthquake and all the others as well—serves less as propaganda than as a sort of neutralizing device that allows the crowd to enjoy the ride without being mentally distracted. Middle-class values have became so embedded in the classic Hollywood mentality over the years that they have come to be used, like soporific Muzak, as a backdrop—loaded as it is—to the action." 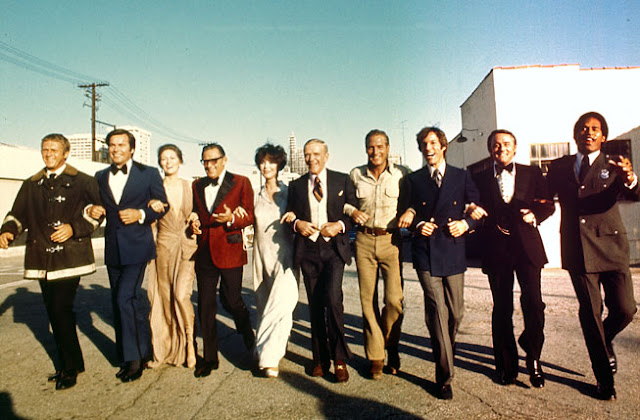 At the time, these movies were praised for spectacle and panned, dismissed at their core as silly, but in retrospect, especially in the years since September 11th, for me they've grown more prophetic and emblematic of American culture. Pauline Kael opened her negative review of Inferno with, "...each scene of a person horribly in flames is presented as a feat for our delectation. The picture practically stops for us to say, “Yummy, that’s a good one!” These incendiary deaths, plus the falls from high up in the hundred-and-thirty-eight-floor tallest skyscraper in the world, are, in fact, the film’s only feats, the plot and characters being retreads from the producer Irwin Allen’s earlier Poseidon Adventure. What was left out this time was the hokey fun. When a picture has any kind of entertainment in it, viewers don’t much care about credibility, but when it isn’t entertaining we do. And when a turkey bores us and insults our intelligence for close to three hours, it shouldn’t preen itself on its own morality. “Inferno” knocks off some two hundred people as realistically as it possibly can and then tells us that we must plan future buildings more carefully..." She later writes, "There’s a primitive, frightening power in death by fire... The realism here is very offensive." In my screening, viewers laughed when watching some of the victims (obviously dummies) tumble out of glass to their deaths. Perhaps as we continue to become more removed from Hollywood depictions of deaths in 1974, we are also becoming more removed from 9/11 itself. As filmic history is often intrinsic with actual history, the almost-surreal feeling of 9/11 on TV on that day and the looping replays in days after, took me back to the imagery of disaster movies. The two novels that were the basis of The Towering Inferno were warnings about the safety of buildings like the World Trade Center--the towers themselves completed in 1973. The movie's ending set in near-darkness below the smoldering skyscraper and Newman's line of "Maybe they just oughta leave it the way it is. Kind of a shrine to all the the bullshit in the world," does feel much more sobering to today than it did when I first saw in the movie in the '90s, and probably much more sobering than it did in the '70s. In cinematic language, it's a great closer in its contrast to how confident Newman appears in the opening--John Williams' heroic theme song booming--as he rides in a helicopter above a bright, sunshiny day in San Francisco. 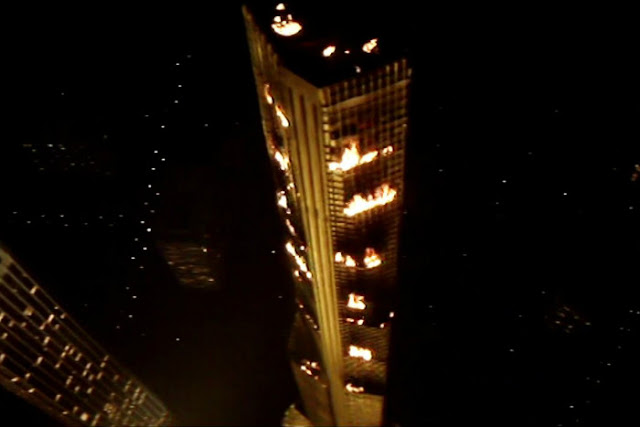 Irwin Allen's action sequences in The Towering Inferno seem more impressively mounted than ever--one stunt after another--from fiery copter crashes, to stairwell rescue sequence, to the transporting of a glass elevator in the sky to the climatic deluge--the trickery of the practical effects and miniatures, the art design, are all first-rate. I have continued to prefer the artistry of these kinds of effects, as primitive as they may now seem to many viewers, than to the sleek blandness of CGI. There are some nightmarish shots of the tower in flames, with red sirens on the ground whirring below, that are searing. I still marvel at the film's visceral feel of realness in its sense of geography and space, even though most of it is sound-stages and sets. Perhaps I should have seen last year's Skyscraper before going too deep into penning this, in comparing a disaster movie of today versus yesteryear, but the look of it never interested me. Moreover, Skyscraper proved to be a pretty minor action flick and sagged in comparison to a sludge of superhero movies (Black Panther, a bright spot among them). It was not nearly the phenomenon The Towering Inferno was.

I'm also enamored with reality-based pictures with grounded performances pitched in pageantry. The all-star cast here all have salt-of-the-earth turns, including the main love interests of the story: Paul Newman as the gruffly affable (and acrobatic) architect and Faye Dunaway's Susan, a seemingly sultry nymph, but deepened by her convictions and the dilemmas of her career aspirations. A perfectly cast Fred Astaire is memorable as a winky conman. I was particularly moved by Jennifer Jones in this viewing, in her angelic white dress (the costuming by Allen-collaborator Paul Zastupnevich, are still distinctively 70s and out-of-this-world) sweetly-natured but suffering no fools. Also a bit saddened at thinking of what ultimately happened to Paul Newman's handsome, real-life son Scott, who plays an acrophobic firefighter--he adds a touch of humanity to a typically machismo role. Battalion chief Steve McQueen is all of that machismo for everyone, and yet, sort of emotionally deflected and exasperated--is there any story to this man outside of his grueling work? Maybe not. Stirling Silliphant's script is sometimes peppered with flowery and metaphoric clunker lines that no human would say, but I still appreciate the arch nature of the language.

When the movie moved from grim darkness into its blindingly bright primary blue credit sequence with yellow lettering, Williams' cue "An Architect's Dream," both reflective and optimistic playing, people started to rise out of their seats. I felt as if I had experienced a simultaneous escape from reality for the movie's near three hour-running time and a contemplation with reality and the changing times. Walking out into the East Village, the whizzing cars, the buzzing restaurants, and gleaming new condos, I continued to listen to Hillary Clinton's 2017 What Happened on audio, a meditation on the aftermath of the 2016 election--a book I finally feel enough distance from the actual event that I could bear it, and her stories of her adversary's corruption and cyber-threats spoken through her hardened Midwestern tone of voice, felt so far from the picture, a picture presented as wide as its been for me ever before, and yet it was all so closer to the day at hand.