once upon a time in hollywood 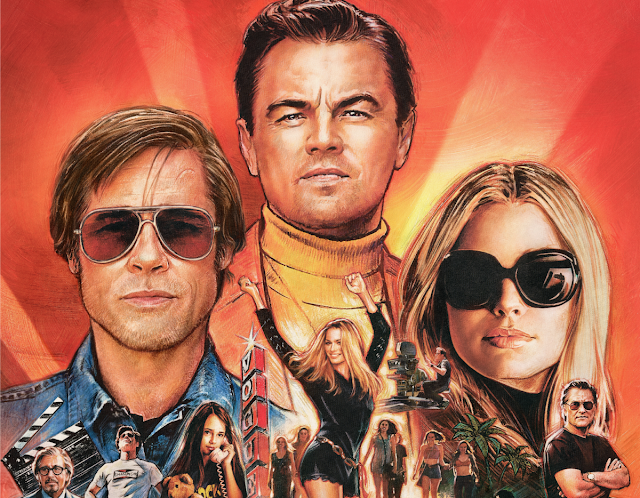 The phones flashed on and off occasionally during my mall theater viewing of Once Upon a Time in Hollywood, jolting me a bit out of from Quentin Tarantino's mythic, luxuriating 1969 world-building. I could sense the audience's restlessness. This is a movie that wallows in period detail. The technical elements--rich, riveting soundtrack and sound design--the exquisite production design and effects (all those buzzing neon lights!)--the costuming (by Arianne Phillips--delivering a few soon-to-be cinematic iconic looks)--are all outstanding per usual. It's been some time though, maybe since Ingloruious Basterds, that the Tarantino universe has really shined. In fact, it's his first set distinctly  from an era he has constantly riffed from. The movie is fueled on period entertainment and consumerism (loved all the use of commercials fading in and out of the rock radio soundtrack)--and one can see how these elements are part of an ongoing American capitalistic slog--"a circle game"--of distraction from our wars and world events (blindness is a motif throughout).

Leonardo DiCaprio's craggy, alcohol-swilling washed-up actor Rick Dalton is one of his finer portraits--a woozy mix of humorous sways of wheezing broadness and a deep underlying sadness. Even though DiCaprio is still firmly a movie star (his last picture was his Academy Award-winning turn in The Revenant), it's interesting to see him play a character so reflective upon his golden boy past. 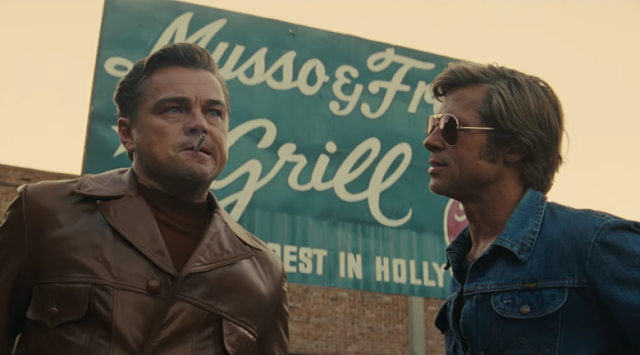 He is paired with Brad Pitt, in buddy-flick fashion, playing his stunt double, who is given a rich characterization by Tarantino as no-frills aging, but still nimble, tough guy. Clad with shades in either denim or a bright yellow Hawaiian shirt, he has a solitary, breezy but sort of melancholy existence with his pit-bull; one of the best scenes is Cliff's long evening ride home from Rick's mansion to his mac-n-cheese dinner-making in his tiny and tinny desert trailer.

Margot Robbie plays Sharon Tate, with her convertible windblown blond hair, who happens to live with husband Roman Polanski next to Cliff on the eve of the Manson murders. It's a haunting character and Tarantino delivers another strong scene in a simple sunny afternoon as she picks up a present for Polanski and joyfully sees one of her pictures at the cinema.

As the title suggests, Tarantino's film is a fairy-tale, though rooted and mired in historical specificity. The most captivating obsessions are ones that are simultaneously repellent and alluring. This is an intentionally shaggy movie and there are some less-than-successful parts like the somewhat weak portrayls of the hippies and a finale which was a bit overcooked--so to speak--though my restless audience applauded that they finally got what they paid for. But the when Tarantino is bathing in details and characterizations, the movie soars like no other out there in years. ***1/2

-Jeffery Berg
Posted by MrJeffery at 9:16 AM