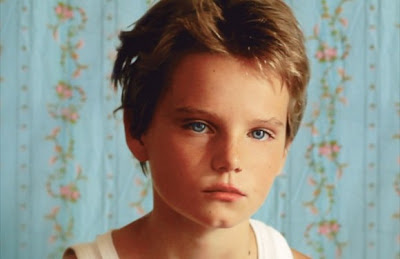 As someone who endured adolescent gender struggles, I admired the way director Céline Sciamma (Water Lilies) handles the material in Tomboy, a sweetly observed coming-of-age tale. 10-year old Laure (Zoé Héran) moves with her father, young sister, and expecting mother to a new apartment.  Laure pretends to be a boy named Mikael while out playing with peers and  attracting the affection of a young neighbor neighbor, Lisa (Jeanne Disson).

The film is very tender and not as tragic as cinematic stories of this nature usually are.  It's also deceptively simple.  It must have been no easy task to direct these young actors as well as Sciamma does. Malonn Lévana endearingly plays Laure's younger sister and delivers some of the film's funniest moments.  Despite her off-the-cuff silliness, there is something inherently wise in her character's defense of Laure / Mikael and the way, as an actor, she's able to emotionally communicate it.  Héran's portrayal is very vivid, almost uncomfortably so.  Sciamma delicately shows the interaction of children as brilliantly naturalistic as François Truffaut did in Small Change and the ways in which the worlds that children create somewhat mirror the competitiveness, anxiety and insecurities of adults.  Once Laure's mother interrupts Laure's fantasy of being Mikael, the film moves into uneasy territory. The freedom Laure felt (expressed in the resplendent opening shot) is abruptly crushed.  It gets better, in a way, yes, but in the adult world, things also get more complicated. ***1/2

-Jeffery Berg
Posted by MrJeffery at 8:56 AM