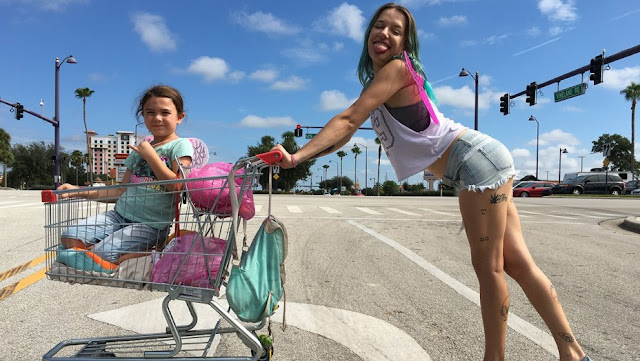 Sean Baker's Starlet and especially 2015's Tangerine were funny, vibrant films with an exciting, engaging visual style. He returns this year with the sun-drenched and exquisitely shot (by cinematographer Alexis Zabe) The Florida Project--a summer in the life of 6-year old Moonee (a magnificently natural Brooklynn Prince). Moonee lives with her mother Halley (Bria Vinaite) in a motel complex of marginalized people on the edge of Disney World. Halley is scraping by and Moonee--rebellious and smart-mouthed, is already becoming keenly aware of American class divisions and the limitations of lower-class adulthood (she can always tell when adults are "about to cry"). The motel is run by affable and quietly stern Bobby (Willem Dafoe) who seems to bear the weight of moral dilemmas he has faced over the years when making decisions for and against his tenants. Moonee creates her own universe, her own Disney World of sorts for her and her best friend Jancey (Valeria Cotto)--an ordinary field of cows and a large twisting tree trunk becomes a safari adventure. Bobby too creates his own universe as well, as we see the ins-and-outs of maintaining the Magic Castle, sometimes banal like fixing a washing machine, sometimes agonizing like deciding the fate of whether or not a family will have a roof over their heads. 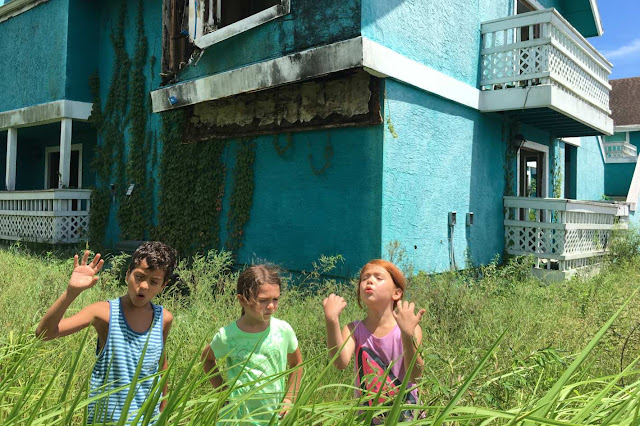 Even though the film looks slick and beautifully controlled, Baker seems to have just let the camera roll before his cast of prankster-driven children (not too far off from "The Little Rascals"). There is no stagy feel to Prince and her gang: they are authentic and quite funny. Movies about children can often be a mixed bag, but Baker shows a deft talent, akin to the work of  François Truffaut in Small Change.  The children here, in their free summer time, are explorers of areas that adults aren't as compelled by; we move through a shuttered housing development on the outskirts of the motel; we watch Moonee's daily trip to the back of a restaurant to collect free food from Halley's friend and waitress neighbor Ashley (Mela Murder). These little moments build up pressure to the point of bursting. And by the time we arrive to the heartbreaking coda, Prince and Cotto are there to deliver a wrenching moment of release.

Like the title itself, a nod to the original description of Disney World in its early stages of construction, the movie is paradoxical. The cast features seasoned vets like Dafoe and those plucked from the locale and from social media (the tale of Vinaite being recruited from Instagram has been  mentioned often). Like Tangerine, there's something about the mix of acting styles makes the film feel effective and alive. There's a pulsing sadness underneath the rainbowy pastels and the lazy summer sheen. The movie begins ironically, with a brisk title sequence set to the Kool & the Gang chestnut "Celebration." A song from a time that seems far away from the lives of Moonee and even Moonee's mother. It's also a song which became an early 1980s American anthem after fifty-two hostages freed from Iran. Reaganomics still informs America's imbalances of wealth, perhaps even more harshly today, and is a prescient aspect of this film. As the tourists around them are in leisure vacation-mode, the inhabitants of this Magic Castle are just trying to survive. ***1/2

Posted by MrJeffery at 8:15 PM