a tale of springtime 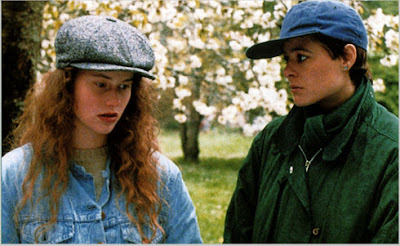 I haven't seen many of Eric Rohmer's films but his A Tale of Springtime (the first of his "Tales of Four Seasons") made me want to see more.  Two women, one, Jeanne (Anne Teyssèdre) a philosophy professor, the other, Natacha (Florence Darel), a somewhat precocious young pianist, meet at a party.  Eventually, out of some sense of shared loneliness, Jeanne ends up staying at Natacha's apartment.  Natacha's father is distant and cold and dating a much younger woman Ève (Eloïse Bennett) whom Natacha dislikes.  Soon Jeanne becomes between all of them.

The movie is impressively acted with naturalism by the principals and their supporting counterparts. Bennett, in particular, is subtly unnerving.  When Ève first appears at a dinner scene, she's probing of Jeanne in a way I found irritating.  The story quietly pulls you into Natacha's disdain for Ève but also Jeanne's defense of her. Stripped of accouterments, the core of Rohmer's piece is dialogue and the actions of the characters.  Minute tics or comments become larger ramifications for everyone involved.  In that sense it behaves more like a play sometimes than a film though glimpses of the quiet, laconic interiors and exteriors (of a gorgeous Fontainebleau in bloom) help create the movie's tension. ***